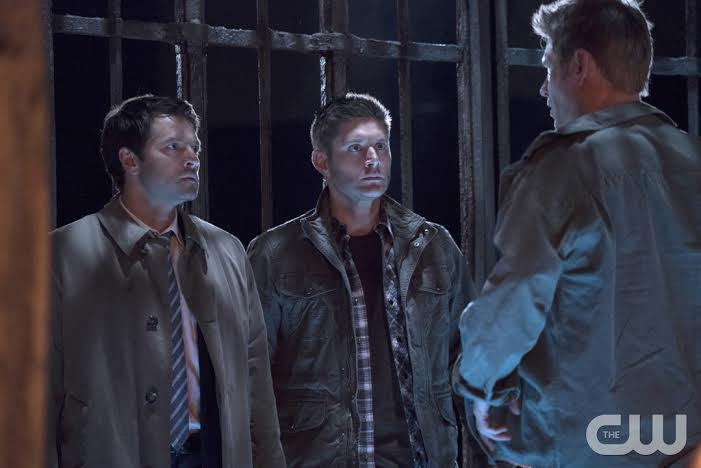 Supernatural is FINALLY back after its mid-season hiatus, and you can definitely say I’m excited. Although I have enjoyed being a bit lazy not having any shows to write about while they’re all on break, it’s great to be back in the saddle, or should I say, back in the Impala.

Although this episode of Supernatural had a multitude of great moments, I have to say that my favorite was Rowena’s Christmas dream in the very beginning. This is mostly due to Crowley’s excitement and exclamation of “I got a Sam!” when he opens up the Funko toy he received as a gift. This relates to me because I have a very serious addiction to these Funko toys, but alas, I still don’t have a Sam. If you need a vision into what Christmas morning was like in my household, this scene pretty much sums it up. Onesie pajamas and all.

This episode of Supernatural focuses a great deal on Sam and Lucifer while the latter tries to convince Sam it’s a good idea to allow himself to be Lucifer’s vessel to defeat Amara. I love the dynamic between these two, and any interaction they have is always written well and keeps us guessing as to where the conversation is heading. Lucifer’s unpredictability is what makes him such a great character for Supernatural. Lucifer starts out with the good cop approach and tries to soften Sam up with a little stroll down memory lane. He shows Sam times when he was respected by Lucifer and was “soft” like he is now. He is trying to instill in Sam the idea that he must be willing to do anything to save the world. AKA let Lucifer use him as a vessel.

During what seems like a bit of a training session for Sam, Lucifer brings up something that has been said before, but needed to be said again. When it comes down to it Sam will always choose Dean over anything and anyone else. According to Lucifer, and I agree “that is the problem,” it makes them predictable, and sometimes just as dangerous to the world as everything they are fighting. They did, after all, release The Darkness. Despite all of Lucifer’s valiant efforts, Sam still refuses to be his bitch, which was to be expected.

Speaking of The Darkness, we were still unsure what came of Amara after her angel smiting at the end of the Supernatural mid-season finale. Well, we find out that she survived (duh), and after consuming an angel’s soul she’s even stronger than ever. She uses Castiel to send a message of “I am coming” to Crowley and Hell. The aforementioned angel that gets her soul sucked by Amara points out to Castiel that he is expendable, and that is definitely a theme of this episode. He is the one who goes in to see if Amara is still alive, and he is the one who is used as meat postage to send a message.

Perhaps the biggest example of Castiel’s expendability is when he is stuck in the cage with Lucifer, Sam, and Dean. During their brawl while they wait for Rowena to finish her spell, Castiel risks his own life to save Dean from being choked to death by Lucifer. However, while Lucifer begins pummeling Castiel to death, Sam and Dean stay huddled together in the corner keeping each other safe. At this moment you can see in Castiel’s eyes the realization that he is indeed expendable to the Winchesters. This realization is what leads to him saying, very discreetly, yes to being Lucifer’s vessel.

The reveal that Castiel was now Lucifer was quite the bombshell for Supernatural and I didn’t see it coming AT ALL. It was another moment that had me yelling “holy shit” quite loudly. It’s a good move because it adds some more depth to the dynamic of the show, and finally gives something unique for Sam and Dean to deal with. Misha Collins is showing off his acting abilities as well, because he does a fantastic Mark Pellegrino, the actor who portrays Lucifer. He nails his facial expressions and overall creepiness. It really is impressive.

Once Castiel, now Lucifer, reveals himself to Crowley and Rowena, we get another surprise moment when he confirms that Rowena is the only one that can put him back in the cage, and then promptly breaks her neck. It was fairly shocking for a main character like Rowena to be discarded so easily, but it was necessary to show how ruthless Lucifer can be. I saw her death coming, though, as soon as she started planning on letting Lucifer loose on the world. There was a bit of foreshadowing earlier on in the episode as well when Lucifer said “snapping necks and cashing checks” is what he is best at.

One more thing that this episode of Supernatural revealed was a bit of weakness from Amara that we haven’t seen before. We get a brief glimpse of her showing signs of the “smiting sickness” that Castiel mentioned early on in the episode to Dean. It seems that she didn’t come out of the smiting completely unscathed, and maybe it is something Sam or Dean will be able to exploit in the future.

The new Castiel/Lucifer hybrid is definitely going to be a really powerful enemy, and I can see Dean having to team up with Amara in some way to take him down. I don’t have too much evidence for this because she is really evil, but I’m a big fan of making bold predictions. Supernatural tends to be great at making my predictions look really dumb, though, so we’ll see.

This episode of Supernatural continued what has so far been a great season, and set up more greatness to come. They’re shaking things up this season and it is just what the show needed. Supernatural sometimes falls into a bit of a routine with its story lines, so it’s great to have a season full of unpredictability.