When Harbinger ended its run at issue #25, it left a gaping hole in the Valiant Universe. Imperium has done well to 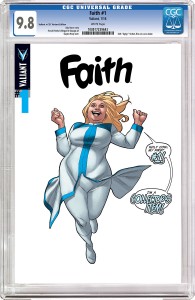 occupy the space left behind, carrying on the story of the central antagonist Toyo Harada, but lacks any exposition of the protagonist Renegades after their split-up. While there has been some continuation of their story in different books, it’s nice to see a focus on one of the more beloved characters, even if it will only be for a mini-series. 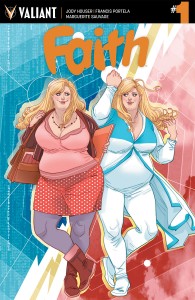 Faith is now living in California, living the life of a dull alter-ego that comes complete with loud neighbors and an uninspiring job. Behind the scenes, she’s trying to grow into her role as a superhero. When ally @x presents her with a lead connected to information leaked from his world-altering hack into the Harbinger Foundation’s servers, she’s more than happy to track down potential psiot candidates that have mysteriously gone missing. Just as she closes in on a clue, she’s confronted by a likely antagonist and the book closes on a cliffhanger.

While there isn’t much else happening in this issue, aside from her hysterical confrontation with a ring of gun-toting puppy-nappers, the setup is more than welcomed. Faith’s credentials as a nerd are top-notch, and she feels like a person who could banter about sci-fi movies and anime between daydreams about saving helpless, shirtless bro-dudes with her powers. Her co-workers, boss, and neighbors all come across as believable and unique human beings. Every aspect of this book lives and breathes, and its connections to the Valiant Universe will inform and interest new fans while keeping veterans entertained. From Torque’s new reality show to Faith’s video chat sessions with Archer, this is a book entrenched in the heart of Valiant. 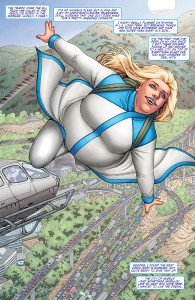 Written by Jody Houser, this book presents a delightful balance of lighthearted humor, action, and fan culture in a vibrant world full of life. Marguerite Sauvage’s art portrays Faith’s daydreams with poppy flair while Francis Portela’s pencils carry the real-life sequences in Valiant style. There’s something for everyone here, and Valiant has set themselves up for a home run with this first issue.

Indeed, Faith is every bit as lovable as its plus-sized protagonist.