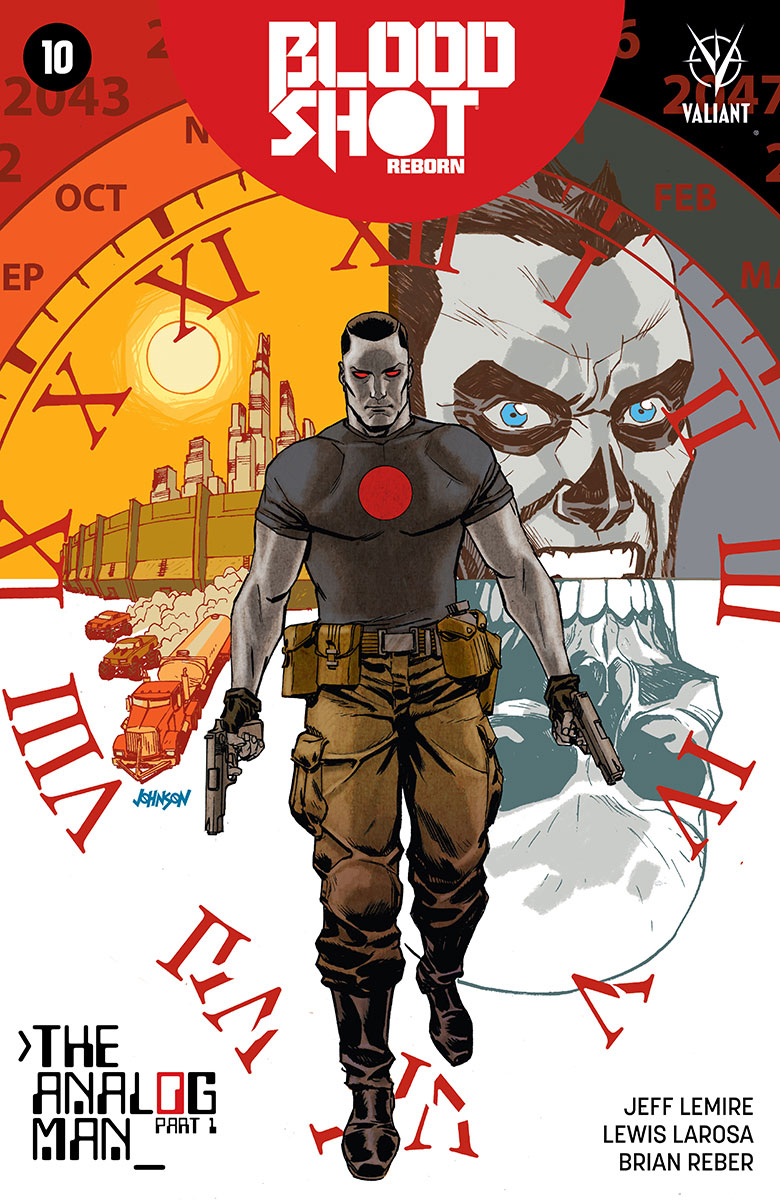 This week in Valiant comics, Bloodshot kicks off a new arc entitled ‘The Analog Man.’ 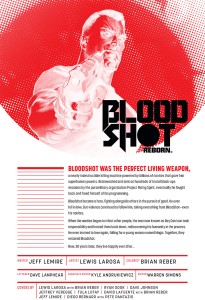 Bloodshot Reborn #10 is very much a key issue, and far more so in what it reveals about the events leading to it than in what actually happens. Taking place 30 years from the present, this arc finds Ray and Magic living in what appears to be a post-apocalyptic world. While Book of Death, and in particular Book of Death: The Fall of Bloodshot, reveal much about the future of Valiant and Ray’s place in it, this time period is one that was barely touched on… if it was even mentioned. 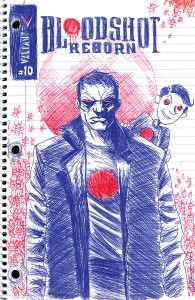 The story is simple: Ray takes a tanker truck to retrieve water for his oppressed-by-the-nearby-super-city village, and on his way back is attacked by a stereotypical post-apocalyptic tribe only to be saved in the end by an old friend. While there’s not much original to the premise, what’s told through his the visuals inner monologue serves to flesh out the world of the future.

When the book opens, Ray appears a feeble old man to match Magic’s aging face. While this could be a method of disguise, or an attempt to conserve his power, what’s important is that he seems to have far more control over his nanites than he did before recovering them in the last arc. This is illustrated as he begins his errand and changes to the more familiar, intimidating Bloodshot. While it was previously established that the nanites granted him the ability to disguise himself as any person, he was only ever able to do so for short periods of time. This seems to indicate that he is now either able to maintain an altered visage indefinitely or (more likely) able simply turn the nanites ‘off’ until he needs them. The interesting developments aren’t simply limited to Bloodshot’s abilities. The tribe of savages chasing him call themselves ‘Shadowmen,’ a name he feels they ‘desecrated,’ having been taken from ‘one of the best men (he) ever met’ after something called the ‘Shadow Invasion.’ He considers it fortunate that (presumably) Jack and Alyssa didn’t survive to see this legacy. In one-half page, this book reveals that Shadowman and Alyssa do in fact come back to the Valiant Universe, that Shadowman likely fights alongside Bloodshot at some point, this ‘Shadow Invasion’ occurs, and that both of them die before the Shadowmen come to be. Again, this is very much a key issue. Even more juicy bits of Valiant lore are to be found within. Connections to the future of X-O Manwar, the legacy of  Unity‘s G.A.T.E., the evolution of the nanites into ‘goo-tech,’ and a surprise rescue from Ninjak are all to be found and savored in this issue. Jeff Lemire continues to keep Bloodshot moving and introduces some very interesting ideas, while Lewis Larosa breathes new life into the series with outstanding inks colored by Brian Reber.

The only gripe to be found is a very out of place flashback sequence depicting Ray and Magic having the same fight for what seems like the millionth time. The back and forth of “It’s too dangerous” vs. “I’m coming with you” is tired and only kills the momentum of the book.