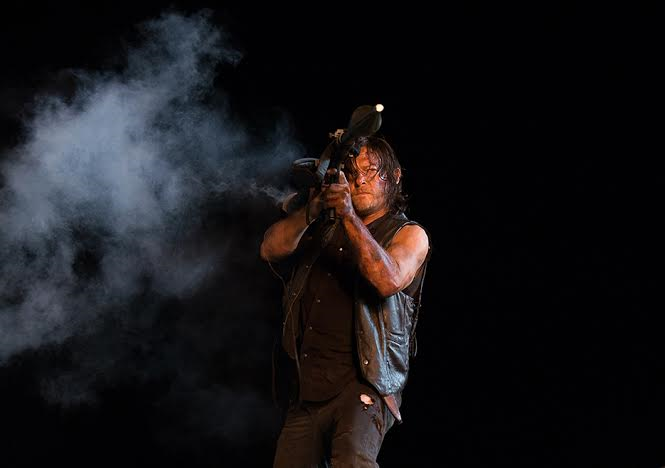 The Walking Dead is back from its mid-season break and proved once again why it is easily one of the best shows on television. The mid-season premiere was absolutely bonkers, and was probably the bloodiest episode of the show that has ever aired. With that being said, let’s take a look at the kill count from The Walking Dead as it stands after this week:

These numbers have jumped quite a bit from the last count, and that was because this episode of The Walking Dead was a non-stop massacre. To be honest, I’m sure these numbers are wildly inaccurate, as I just could not keep up with all of the killing that was taking place. At one point I was just adding to the count in groups of five for certain characters. I gave Daryl an extra 20 as default after he killed a good amount of the walkers with the RPG at the end, because it seemed fair. That should give you an accurate picture of the shit-show that was this episode of The Walking Dead.

We started off with Daryl, Sasha, and Abraham running into a wannabe Hell’s Angels biker gang during The Walking Dead who stopped them on the road and took their weapons. Apparently they work for a man named Negan. For fans of The Walking Dead comics, this name drop was probably the best part of the episode because Negan is a fan favorite, and will be the newest villain facing our group going forward. Unfortunately, one mention of the name is all we get of the character for now; we’ll have to wait some more to see what the newest foe is really like. Or you could go read the comics right now, your choice.

Daryl proves why he is the most bad-ass The Walking Dead character when he quickly disposes of Negan’s thugs in a fiery explosion with a well placed shot from their newly acquired RPG. Much like an RKO, this shot came out of NOWHERE and really got the episode started off strong.

Kind of like the Olympic Flame, this explosion signified the start of something huge and historically important. I’m not exaggerating, either, this episode of The Walking Dead was that good. Afterwards the focus shifted to Rick and his group as they tried to sneak their way through the giant horde of walkers that now calls Alexandria home. It’s actually going really well until little shit-head Sam decides he’s too scared and starts to whimper.

He’s then devoured by a few of the walkers they are trying to get past. In what turns out to be a pretty messed up chain of events, Jessie is also devoured by zombies while screaming about Sam, Michonne stabs Ron (finally) when he points a gun at Rick, and finally said gun goes off and shoots Carl in one of the windows to his soul. Seriously? The Walking Dead really decided to go all George RR Martin this episode and just kill off whoever they pleased. I seriously haven’t seen a family wiped out that quickly since the Red Wedding.

Another extremely stressful moment in this episode of The Walking Dead was when Glenn sees that the tower Maggie is on is in danger of being toppled by walkers. Glenn makes the decision to sacrifice himself and lead the walkers away from Maggie by shooting as many as he can. We just got you back, Glenn, why are you doing this to us?! Luckily at the last possible second, when Glenn is about to finally be taken over, Sasha and Abraham save the day with some well placed machine gun fire. I have seriously never been more stressed, or more relieved, than when I was while watching this scene unfold. I couldn’t handle losing Glenn that quickly after getting him back. I do feel, however, that they have played with Glenn’s fate enough this season, and we can safely assume he won’t be dying anytime soon.

One of my favorite things about this episode was its cinematography. There were so many great shots and use of cuts that I can’t even begin to list them all. My favorite shot of the episode, though, was at the very climax when we get rapid-fire shots of the characters swinging their weapons over and over again. The quick changes of the characters, paired with the music, made this an amazing piece of filming that really brought the tension and craziness of the scene to life.

After Rick and company massacre as many zombies as they can in their last ditch effort to survive, Daryl shows up with his trusty RPG and a big tank of gasoline and saves the day. I’m happy that the bad-ass Daryl we’ve come to know and love made a return this episode, because I’ve really missed him. After Daryl’s heroics, we get a touching scene with Rick sitting over Carl’s bedside, admitting to him that he finally understands that they can work with the people of Alexandria to accomplish great things. I’m sure they will too, until Negan comes along to screw everything up. This epiosde of The Walking Dead ends on a sort of cliffhanger, with Carl finally showing some signs of  life and grasping Rick’s hand. Carl will probably be fine, and will get to play Governor with a cool new eye patch.

This episode of The Walking Dead was easily one of the best that the show has ever aired, and I don’t hesitate at all to put it in the top three. The only reason I’m not saying it’s the best one ever is because I can’t remember exactly how I felt after some of the great episodes from earlier seasons. This was The Walking Dead at its best, though and I absolutely cannot wait to see what the rest of the season has in store.