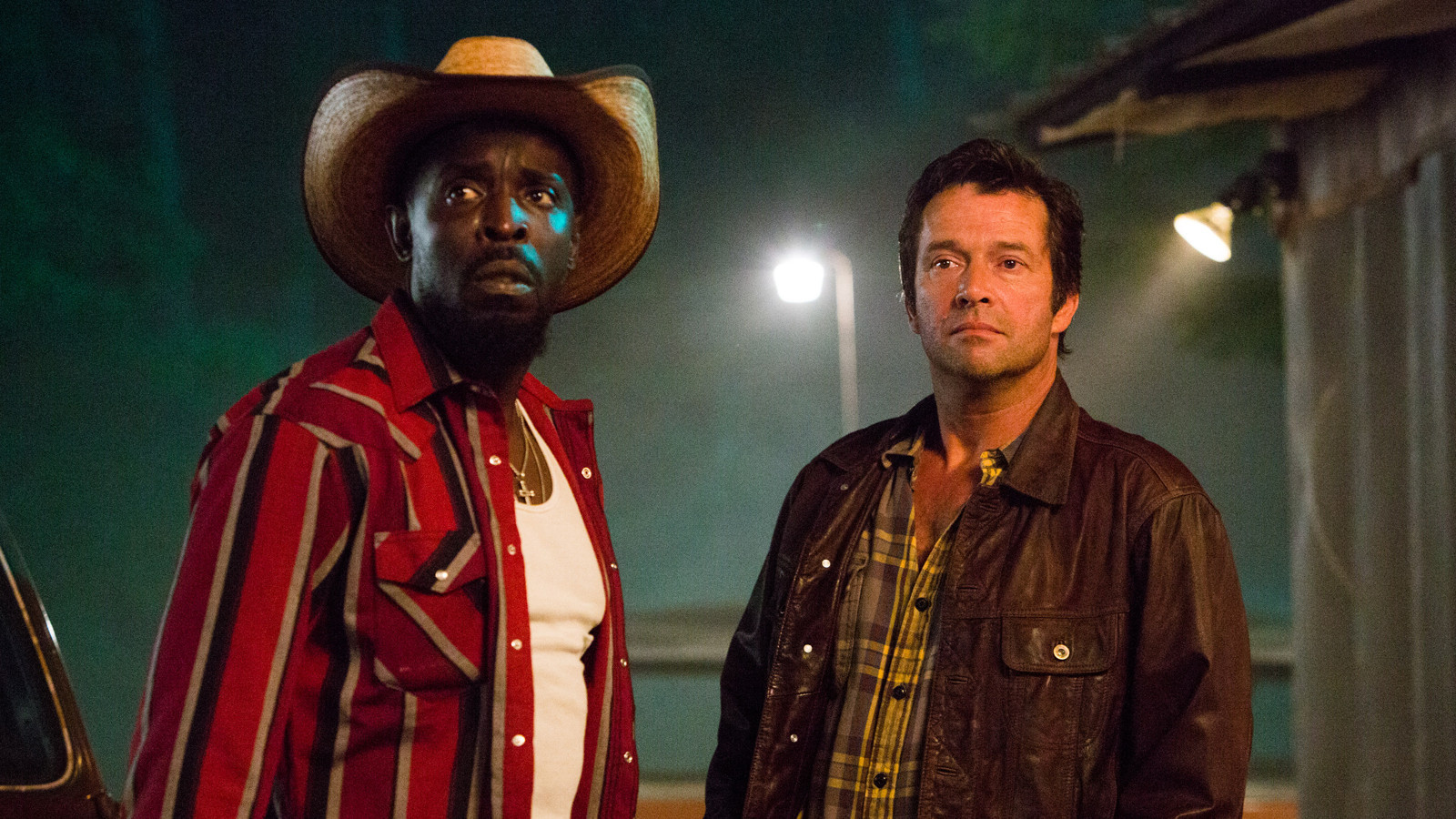 Hap and Leonard is an unusual but strong show currently airing on SundanceTV. Since I just came across the series, I’ll be reviewing both of the first two episodes in this article, but from this point forward I’ll be more timely throughout the rest of the season when a new episode arrives. The series stars veteran actor Michael Kenneth Williams, rightfully remembered for his legendary take as Omar Little on The Wire, as he co-stars next to The Following‘s James Purefoy. They play the titular characters – Purefoy being Hap, Williams being Leonard. Christina Hendricks plays another main figure, Trudy, the ex-wife of Hap.

Rectify and other non-mainstream shows have given SundanceTV a claim as one of the modern gem networks for fascinating television entertainment. Hap and Leonard functions on this wavelength – there’s a palpable Texas atmosphere, tremendous chemistry between Hap/Leonard, and a mixture of numbing violence and hand clapping comedy. In the first episode, we learn that the two primary characters have been friends since childhood. Hap is a down on his luck working man who refused to fight in the Vietnam War earlier in life, while Leonard is a Vietnam veteran struggling with bigotry projected onto him for his ethnicity and homosexuality.

Despite their different paths during war time, the pair are incredibly close in their odd but nevertheless chemistry filled way. We’re given the impression that Hap is the only person Leonard trusts, and Hap goes out of his way to defend those critical of Leonard’s sexual preference or icy demeanor. That all sets the board nicely character wise, but we still need a premise. That’s where cash money enters the picture.

Trudy has a lead for Hap on a massive heap of money located at the bottom of a Texas river. Initially reluctant given Trudy’s devious ways, Hap eventually agrees to try to find the money if Leonard is allowed in on the deal as well. Through two episodes, that’s where we are in the series. Both primary characters need cash, and although this escapade leads them to a cast of strange personalities (the liberal/spiritual Howard, the overweight/friendly Chub, and the face burned/ominous Paco), the basic aspect of the show is financial desperation leading to a hunt for river buried fortunes.

The most interesting of this band of misfits would be Paco. His facial scars by nature make him a can’t miss presence, and his bomb making/violent backstory is hinted toward enough to where we assume he has a rich history. Hap and Leonard‘s debut episode spends most of its time familiarizing audiences with the two leading men and setting the stage for their scheme. The explosive ending comes when an at the time unknown man distracts a cop as his terrifying girlfriend murders him from behind. The pair are for some reason searching for Paco. Moments of brutality like this contrast with sequences of comical banter between the leading pair.

In the second episode, the pursuit for the spot continues, and Hap/Leonard attempt to search as a pair while half accepting the oddballs they’ve been forced to work with. The problem? When Hap does find the river, it’s nothing but a long strip of expansive dirt. “How does a river just disappear?” Hap wonders out loud as he and Leonard pound a beer at a Texas bar that captures the atmosphere I mentioned earlier. Good question…

This obstacle does, however, help sustain the series. As much as I’ve enjoyed Hap and Leonard, I have at times pondered the sustainability of such a premise. Of course, we can be sure the writers will present obstructions and difficulties on this financial path to keep the wheels turning. What’s more, as Leonard has acknowledged throughout both episodes, there’s not even a guarantee the cash destination exists. It is, after all, a prison story that was mouthed all the way to Trudy.

A character I haven’t mentioned yet is Leonard’s uncle, a mean and cold man by the name of Chester, who at every turn berates and rips apart Leonard for his sexual preference. Despite being the victim of his torment, Leonard seems to have a genuine fondness for his relative. The old man has health complications in episode two and this takes a heavy toll on Leonard.

One interesting dynamic of Hap and Leonard is its flashbacks/historical references. That being historical from our 2016 perspective, not so much by standards of the 1980s era the show takes place in where the references are more fresh than dated. We’re given two broken men, two left behind adults with lives altered by the U.S. presence in Vietnam and the most unlikely of friendships being the only thing guaranteed in a world otherwise occupied with inequality and a lack of compassion. I wouldn’t call Hap and Leonard tragic in any Shakespearean way, but I would suggest it speaks to the downfall social situations can cause on still living, down on their luck victims. Hap and his best friend Leonard have had difficult lives, and the show presents them unapologetically – two circumstantially dictated individuals looking for any break they can find.

For its unique nature, committed performances, and original traits in a TV climate of played out copying, Hap and Leonard offers plenty to justify an audience. I never have high expectations for SundanceTV ratings wise, but I’ll take significant quality in creativity over a surge in ratings any day. The network has come to specialize in programs that will appeal to an audience of some sophistication as opposed to one searching for a quick thrill. Now that I’m interested in the series, I’ll be dropping weekly Pop Culture Spin reviews of Hap and Leonard either the night a new episode drops or more likely the following day.