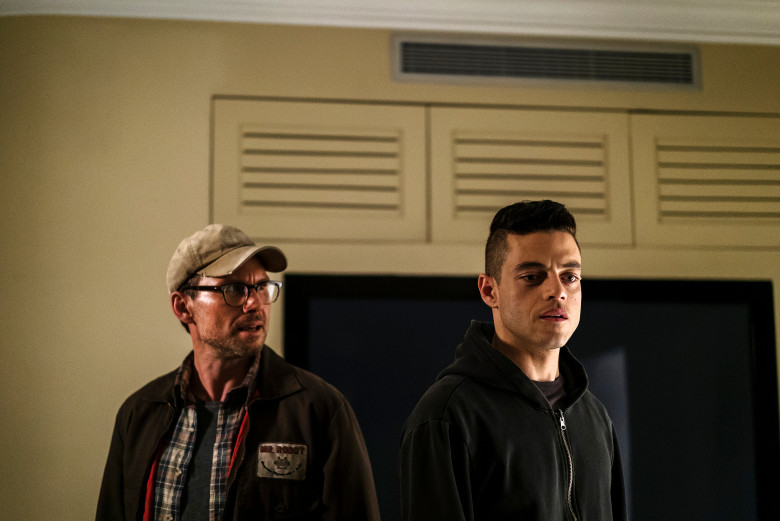 Mr. Robot kicks off with a traditional Elliot thought bubble rooted with introspection. He repeats a creepy mantra to himself that a friend once taught him. As Elliot sits deep in thought, Angela is in the back of a red van blasting loud music. This scene lasts merely a moment before Dom is treated and questioned at a hospital. As I discussed in my previous review, Dom is walking the “I’m right and my coworkers are all wrong” path, a dynamic that has been proven to be accurate thus far.

While the action in Mr. Robot has been enticing lately, we need more answers. What in the bloody hell happened to Darlene? I’m not a fan of cliffhangers, no rational human is, but what’s worse is having a cliffhanger that isn’t answered early in the following episode. That’s a slap in the face to the audience.

Angela continues on her travels. The van parks in a garage then lets her out. Walking through the white and faceless house, Angela is eventually led to a dark room with a fish tank. A little girl appears in the room and uses a computer in what’s shaping up to be one of the weirdest scenes Mr. Robot has ever shown us. “Have you ever cried during sex?” is the first question thrown Angela’s way. Goodness… The child states that she’ll be beaten if Angela doesn’t answer.

Does anyone else feel uncomfortable watching this? I have a thick TV skin, but part of why this scene feels so uneasy is because the audience shouldn’t even be buying in here. The status of Tyrell, Darlene, and various other plot points are significantly more crucial. Who this child is and how she reached this moment in time is a chilling thought to have, but it’s not something the audience should be dealing with.

Dom’s apartment is a disaster. I didn’t take her for the messy, shoulder tattoo rocking type, but there you have it. The funniest moment of the season occurs when she calls the voice command on her phone a “dumb bitch.” Even with the element of comedy, there’s also a sad dynamic here. Dom seems like a lonely and isolated individual. Buried in her career, she doesn’t make time for friends, boyfriends, or hobbies.

More of Angela in the dark room. Whiterose enters and allows 28 minutes for conversation, a self-described “very generous” gesture. The deeper their conversation goes, the greater the likelihood grows that Angela’s life isn’t in danger. Whiterose picks her brain and shifts between legitimate questions and philosophical ramblings. We’re definitely slipping down into the rabbit hole with this scene. It’s gripping, however, it also doesn’t tell us anything important.

Elliot wakes up to find Mr. Robot in his apartment. They go on a numerical hunt and end up finding a phone number. The voice on the other end of the line tells him an address and that a cab will be waiting for him there. The camera focuses on Elliot’s door in a comical effort to connect the scene to Whiterose’s earlier musing on locks and doors. Hooray for connections!

It appears that Angela’s talk with Whiterose has convinced her to drop her mission. As this realization is reached, Elliot enters the cab. The driver asks him for an address, a question that Elliot is hopeless to answer. Tyrell then joins the party and sits next to Elliot. Is this real? Is Tyrell truly alive? We don’t know. We also don’t know if Darlene is still alive. Yikes. Talk about betraying your audience… How can you end an episode with Darlene being under heavy fire and then go an entire following episode without revealing a shred of information about her status? Lame. Mr. Robot is still an intriguing show, but its primary motivation seems to be to infuriate rather than to entertain.