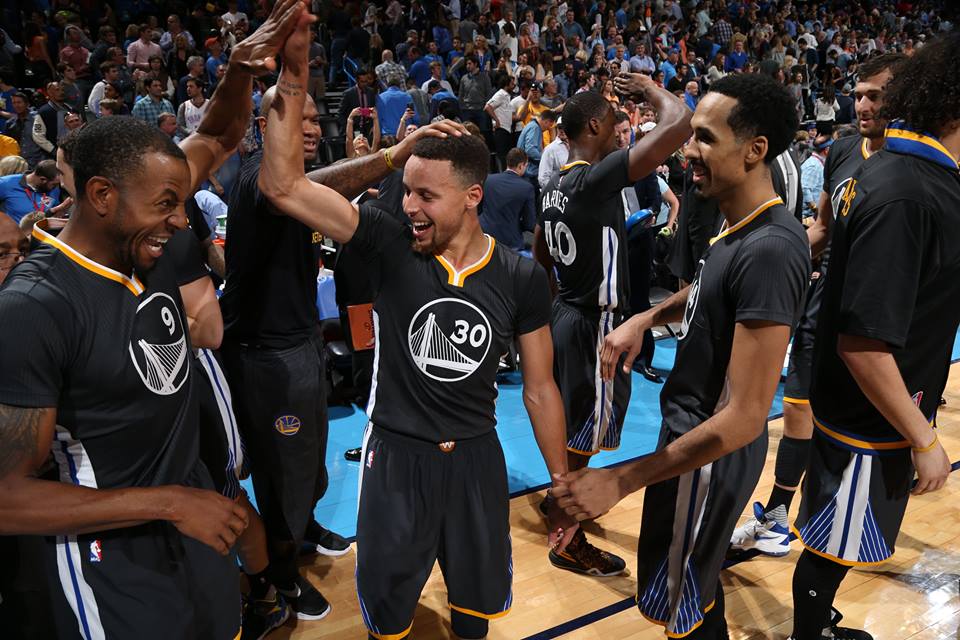 Isn’t it ironic that it’s always more difficult to find the right words, or perhaps more correctly, the right sequence of words to describe something you are witnessing that you have never come across before. As a writer it’s a cruel joke knowing that no matter what it is that you say about the event or happening in question it will never fully do it justice. When there is no historical precedent for what you are witnessing there gets to be a point where you realize that what is being written, spoke of and debated stops mattering because the best way to understand as best you could is to sit back, watch and enjoy.

Needless to say, we as a basketball-digesting fan base haven’t hit that stage yet. As I’ve written before, we’re so consumed with putting things in historical perspective that it doesn’t allow us to put things in current perspective. A textbook example of this very phenomena can be seen with the coverage of Stephen Curry this year. Many former NBA stars have come out and diminished Curry’s current tour de force through the league, acting as if it’s a fluke or a product of a weakened NBA. Contrarily, we’ve seen analytics nerds gush about Steph’s endless range and insane efficiency from all areas on the floor, including ones where individuals are not supposed to be insanely efficient. No matter what side of the argument you’re on, almost everyone is trying to determine where Steph rates historically … only we’ve failed to realize that what is most important for the time being is determining where he rates right now.

I can’t sit here and say that my take on Curry holds more weight than anyone else’s does. In the grand scheme of things it probably isn’t all that unique either. I’d love to have been able to craft a never-before-heard hot take on the level of which Curry is excelling, but rather than critiquing him, over-analyzing him or arguing about his place in the league, it’s best to just appreciate him as best you could. And that’s all I’m doing from here on out.

Appreciating every bit of the Stephen Curry experience shouldn’t be a tremendously difficult task. It’s not asking much of fans to simply marvel at an individual who is quite possibly the most entertaining basketball player of our generation; an offensive savant who makes teammates better and puts the fear of God into opposing defenses. A certified late-game killer who doubles as the most underrated passer in the league, triples as the league’s best ball-handler and quadruples as the best shooter who has ever stepped on a professional basketball court. That final distinction is one that even the most hardened and stubborn old-timers will admit to.

When you read all of those claims, or even better, when you watch Curry with your own two eyes, it’s natural to be inclined to skip steps and begin to imagine where he falls in this imaginary line of the best basketball players to ever live. Even as someone who routinely advocates for holding off on any legacy-related dialogue until a player has retired, it will be hard for me not to wonder where Steph belongs if the Warriors cap off a 2015-16 season that could be considered one of the greatest ever by any conceivable measure. For the next two to four months though, I’m making a pledge to do nothing but soak it all in, and I implore you to do the same.

Even in this column, a column which I’m giving my vote for the NBA’s MVP Award to Curry, a column that I expected to be writing in the closing week of the season and not in early March, I’ll do my best to avoid heavy doses of hyperbole. There is no need for hyperbole when dealing with Curry. In fact, I’ll proceed for the duration of this column with only facts (in bullet format) while staking my case for a premature MVP coronation for Curry:

Stephen Curry is having one of the greatest statistical seasons ever. Again, that is not hyperbole … this is a stone cold fact. If current numbers hold up, Curry will become the 27th player to ever average 30 points per game in a season, the 13th player to ever average 30/5/5 in a season and the first player ever to lead the league in scoring and three-pointers made. Speaking of three-pointers, Curry has already broken his own league record for three-pointers made in a season. He’ll become the first player to ever make 300 three’s in a season, and possibly the first player ever to make 400 threes in a season. He could possibly become the founding member of the 50-45-90 Club (50 percent shooting, 45 percent three-point shooting, and 90 percent from the free-throw line). One last statistical nugget: he’s on pace to set the single-season record for Player Efficiency Rating. He’d top Wilt, MJ, LeBron, Shaq, and every single other player who has ever been on an NBA roster.

With all of that said, I’m momentarily out of words. Like I told you before, sometimes it’s just really difficult to muster enough words out to make sense of something when there has never been anything like it that has happened before. At a certain point what Stephen Curry has done and is doing will begin to make sense, and then we’ll find it much easier to find both current and historical perspective with what we’re watching.

What’s ironic is we actually shouldn’t be in a rush to get to that point; the point where we are hypercritical and rushing to find the next guy in line, the next Curry. Right now is the funnest part of the experience. Steph Curry is making the NBA more fun that it was without him. He’s the most marketable player since MJ, the most beloved athlete alive and every night he steps on the floor he does something that makes you think, “Wow, I’m lucky to be watching this guy play basketball.” Ladies and gentlemen, this is your 2016 NBA MVP.