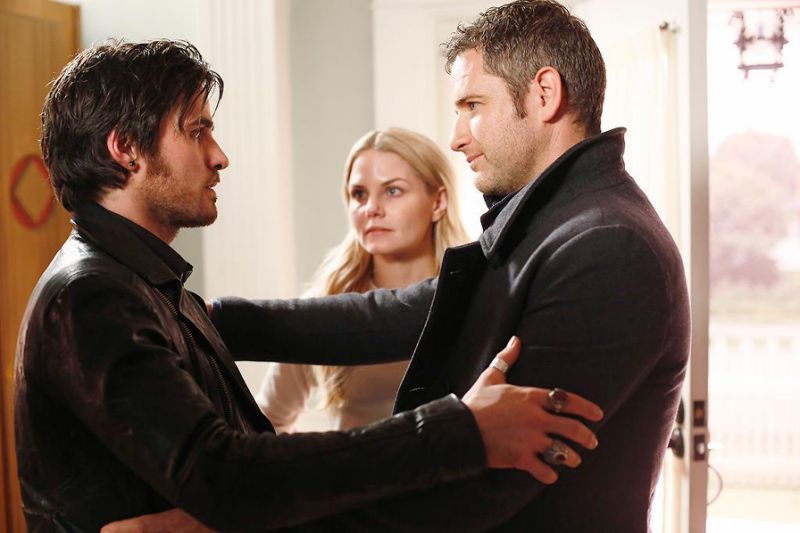 This was not my favorite episode of Once Upon a Time by a long shot. In fact, it was definitely my least favorite since its return a few weeks ago. Once Upon a Time has a habit of everything tying up neatly, seemingly by chance. However, often times its plot can teeter a little too closely to convenience, which is what happened this week.

The main chunk of the story went something like this: Henry wants the quill back, and while looking for it stumbles upon the apprentice, who tells him that it’s hidden inside the sorcerer’s house. Of course, they’ll need the key to get in, which is guarded by David’s twin, with whom they have unfinished business (“He kissed you?” “I thought it was you!”).

Quick side note; I’m glad they finally tied up the loose end regarding Snow’s and James’ kiss. David and Snow are the best couple on Once Upon a Time, and I love that there was no hint of jealousy besides a quick remark from David as to whether he kisses like his brother.

Anyway, back on track. It turns out that the one thing they need to defeat Hades is also in the sorcerer’s house—the Underworld version of the Storybook. Except Liam, Killian’s brother who randomly shows up, is being blackmailed by Hades to get rid of the book. See how it all fits nicely together in a way that, had this not been Once Upon a Time, would certainly feel forced?

And it doesn’t end there. Liam’s separate plot, including his flashbacks, had touches of this convenience that I suspect came out of the writers’ laziness to create more sensical explanations.

For starters, I’d never have expected a mutiny to run so smoothly. It happened practically in the blink of an eye. And while there’s been no mention of Hades presenting himself in the Overworld, as he puts it, before, it turns out that, of course, Hades has some backstory with Liam – which is where the blackmail comes in.

Back in present day Once Upon a Time, the bizarreness continues when Liam’s betrayed crew (of ten minutes, following said smoothest mutiny in history) gains access to the fires that send people of the Underworld to a worse place. By the way, this was something I found issue with before but chose not to mention. Shouldn’t a place like that be guarded? Or somewhere only Hades can enter?

Eventually Hades actually does show up and stops both Jones brothers from being subjected to the flames, and instead demands that only one make the trip—Killian. Of course, Liam being just as annoyingly self-righteous as Emma says, puts himself in the line of fire (pun only slightly intended) and in another turn of coincidence, saves his soul instead. The subsequent boat ride with the rest of his no longer angry crew into “a better place” was so cheesy it almost ruined the entire episode for me.

Back to Liam. Even though Emma and I had good reason not to trust him (my distrust occurred the second Hook said his brother had never done anything wrong in his life), I have to admit the man gave Emma some harsh truth she really needed to hear. Emma’s actions involving Hook for Once Upon a Time‘s fifth season have been incredibly selfish, and someone needed to point that out. Besides me, that is. Liam proved to her that Killian needed to make the choice to leave the Underworld for himself, instead of her deciding for him again.

Luckily for me and everyone else who would be lost without Hook’s dreamy eyes to stare into, he (somewhat incongruously) made the decision by the end of the episode. The fall of his hero of a brother was supposed to feel like the deciding factor for Hook, but it still felt like quite a leap for him to make so fast.

Another change of heart that happened this episode of Once Upon a Time was Henry’s. Henry’s story was probably some of the most interesting conflict of the episode, but for some reason ended up taking a back seat. After being convinced by Cruella to change the story, it seemed like Henry was heading down a path similar to the previous owner of the quill.

His change of heart, encouraged by the Sorcerer’s Apprentice, was a much more believable one. Henry, despite his often short-lived teen angst, is too sweet of a kid (he says adorable shit like, “moms,” for crying out loud). I knew that Henry would make the right decision in the end, which hopefully means he saved the Apprentice’s soul. I’m a bit confused how he plans on rewriting Hades’ story when he doesn’t know it, but maybe there’s some magical superpower that authors have that we don’t know about?

All we know for sure is that Hades and Zelena know each other. Because of course all soulless redheads have to be friends. I always knew we hadn’t seen the end of her, and now I’m thinking she’ll be back sooner than later.