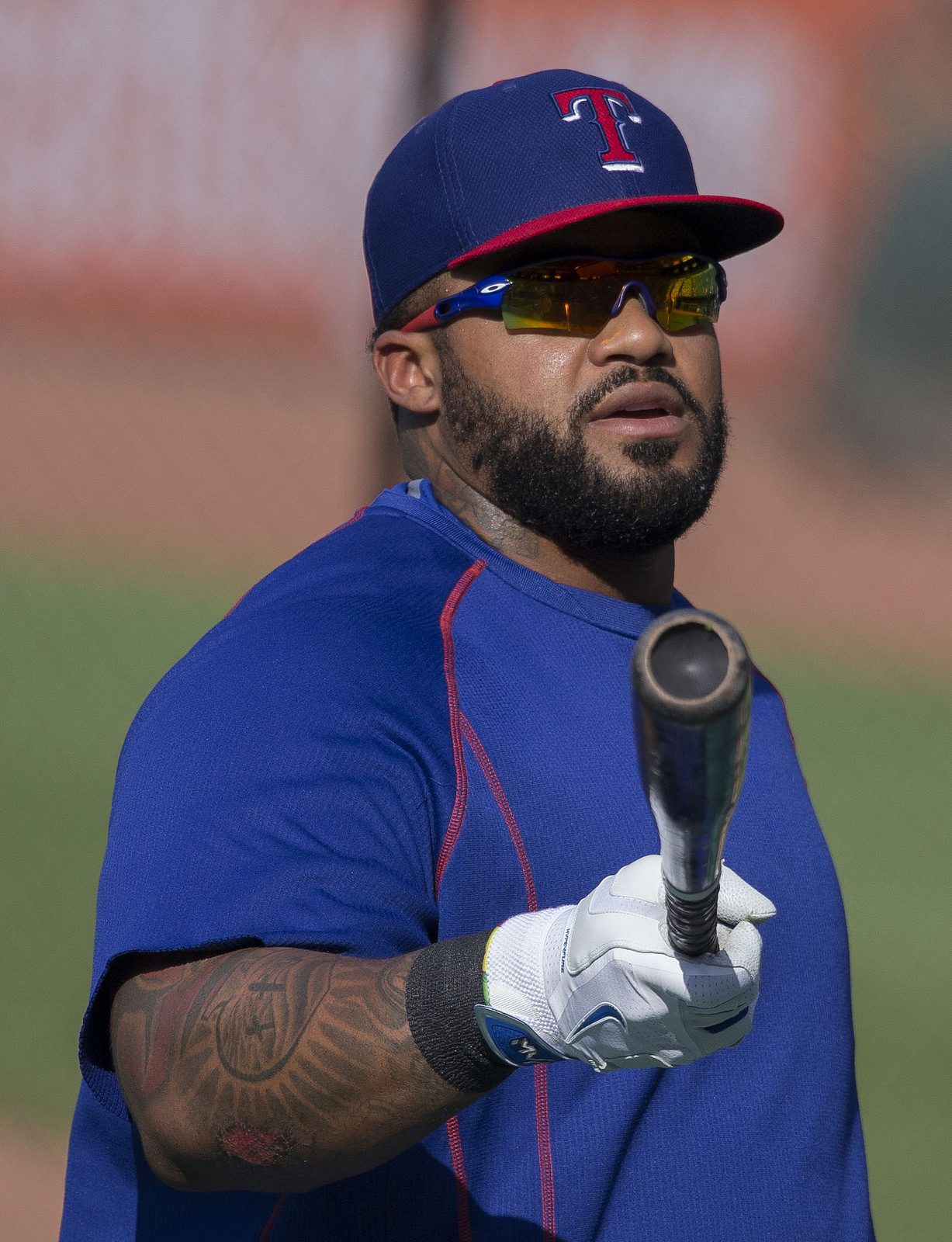 Yes, I meant to capitalize those two very important words in order to completely proselytize non-baseball watching individuals by way of formal grammar since the day might as well be a national holiday. The intoxicating sights and smells that tickle one’s senses overwhelm in the best way possible – from the roar of the flyby planes over head, to the odor of Globe Life Park’s newest bacon wrapped, Frito chili chips laced, brown sugar coated, hot dog in a fried donut bun (this isn’t exactly a thing, but I once saw someone at a fair here fry butter and serve it as a snack on a stick so I wouldn’t technically be surprised. Diabetes for everyone, yay!).

Enough with the glittery side notes and apothegms deep fried in bacon grease, heart failure, and sass – let’s get down to the only reason why this should be deemed a holiday: The sport of baseball itself, as narrated by Cole Hamels and the Texas Rangers.

Baseball in Texas is not a game. Like high school football, college football, pro football, NCAA basketball, pro basketball, tee-ball, throwing a rock at a tree… okay, just about every single sport in the Lone Star State… baseball is considered a religion and fans worship at the feet of their beloved athletes, both past and present.

If fans are well versed in the history of the sport, they know that what happened during Monday’s game between the Rangers and the visiting Seattle Mariners hasn’t happened in over 100 years.

The Rangers managed to pull out a 3-2 win on Opening Day while registering just a single hit.

Ace’s Hamels and Jake Diekman were acquired by the Rangers from the Philadelphia Phillies for five prospects, veteran pitcher Matt Harrison, and Nolan Ryan’s shadow last year and soared during the remainder of the 2015 season, fitting right in without missing a beat so it makes sense that the Rangers put Hamels on the bump for the start of the regular season. He faced Felix Hernandez on the flip side of things, so it was guaranteed to be a wild, event filled afternoon.

Only, it really wasn’t.

Robinson Cano and Kyle Seager both got two huge homers off of Hamels’ somewhat shaky arm at the top of the second which put the Rangers in an early 2-0 hole. After that, however, Hamels found his game. He lasted all the way to the seventh without getting himself into any more drastic messes he couldn’t clean up with a moist towel. He ended the afternoon with 7 IP, 4 hits, 3 walks, 8 Ks, and 2 runs.

Now for that single hit.

During the bottom of the fifth, things got, well, just plain odd.

After a Rougned Odor walk and an error (E5 for the Mariners) on an Elvis Andrus hopper, Robinson Chirinos came to the plate with zero outs, and hit a sac bunt which moved Andrus to second. They were setting the table for the fatal order of Delino DeShields, Shin-Soo Choo, and Prince Fielder with only one out.

After DeShields drew a 4-pitch walk, it was up to Choo to bust open the game with bases loaded. But did he? Nope. Hernandez ended up walking Choo, which brought in Odor. Then came the only hit of the game off of a Fielder sky high blooper to shallow left field, tying the game 2-2 and snapping a possible Hernandez no-no. Another error resulted in another run on a double-play grounder, pushing the score to 3-2 where it would stay for the remainder of the game.

Diekman replaced Hamels at the top of the eighth and had an easy 1-2-3 inning before Shawn Tolleson preserved the game by closing and locking up the first win of the regular season for the Rangers and even ended up handing Hernandez his very first Opening Day loss. 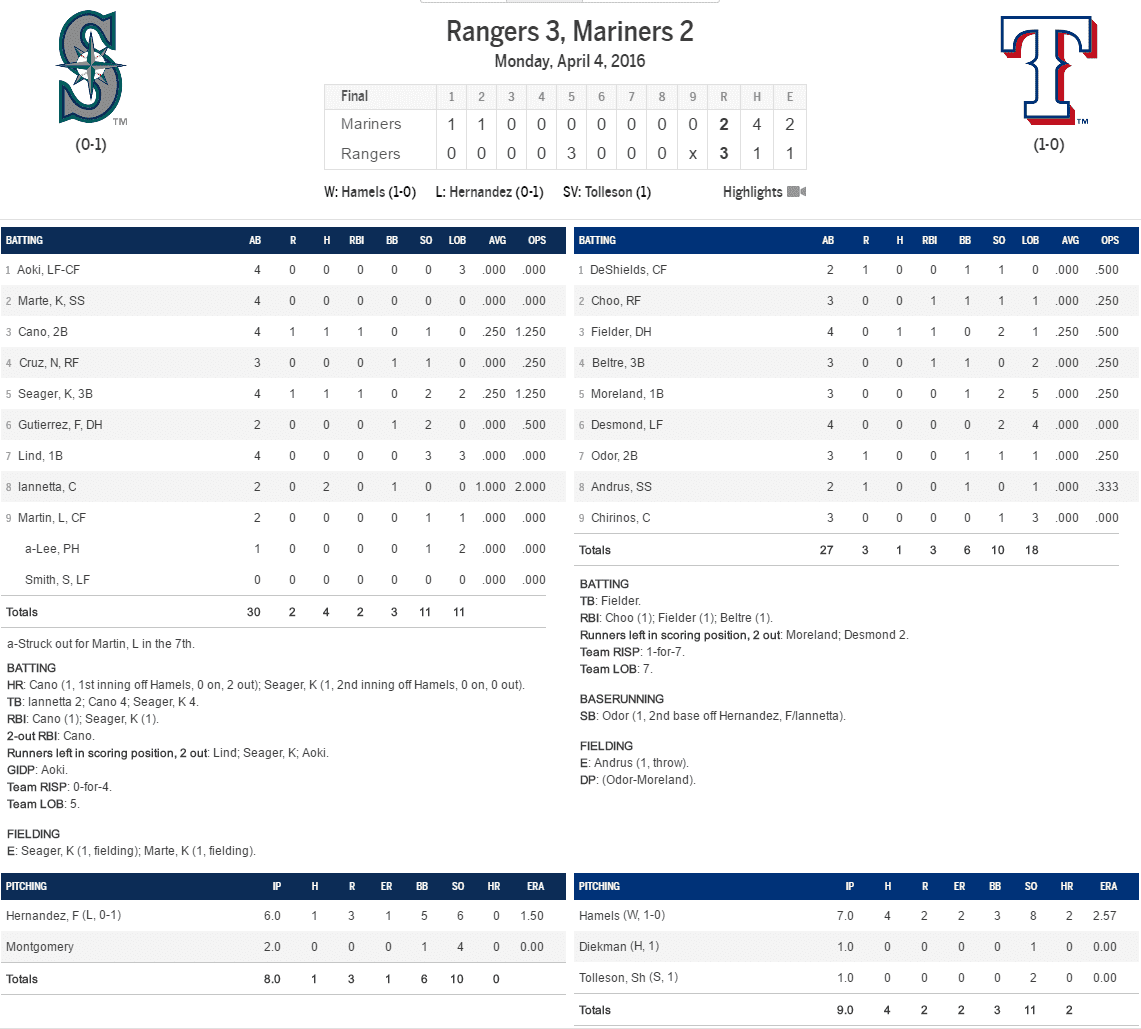