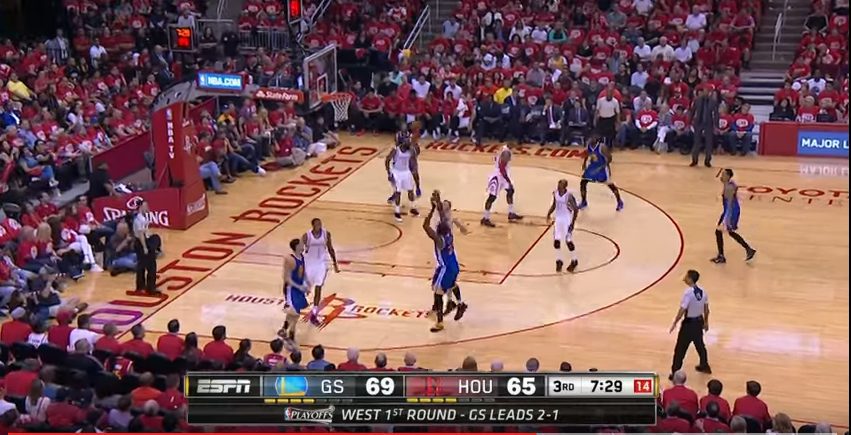 If there was any heart displayed by the Houston Rockets in the first half of Game 4, which there unmistakably was, that same heart was obliterated and buried deep within Texas during the second half. With a 52-52 tie and Stephen Curry leaving the game with a sprained knee, it appeared Houston had a glimmer of hope.

Then Klay Thompson and Draymond Green took over (15-27 from the field and 11-17 on threes combined) as the Warriors set an NBA playoff record for most threes made in a game with 21. But the team effort was much deeper than a Thompson/Green explosion. The Warriors received the following contributions from key players – Andre Iguodala had 22 points on 11 shots, Shaun Livingston had 9 assists and just a single turnover, and Harrison Barnes had 12 points on 2-5 shooting from deep.

Curry’s fall occurred on an apparent wet spot that also caused Donatas Motiejunas to slip moments before as the second quarter neared its end. It was a scary and awkward tumble for Curry given the way his body shifted as he landed. It remains to be seen if Curry will suit up for the Warriors in Game 5. Given the 3-1 series lead and the nature of its opponent, I’m sure the Warriors will be cautious.

For the Rockets, James Harden had 18 points, 10 assists, 7 boards, and 7 steals, although he went 4-13 from the field (2-8 on triples). Dwight Howard put up a double-double in the first half and finished with a 19/15 game overall. Trevor Ariza struggled again, a theme for this series, going 3-of-11 for 8 points. Houston suffered when Patrick Beverley went out with an injury that prevented him from taking the floor in the second half.

As the announcers noted during the broadcast, it was visibly apparent that Houston gave up in the third quarter. Hence the title of this recap, I firmly believe the Rockets experienced a crushed soul and broken will once the Warriors began lighting them up from deep even with the best shooter in the world not playing.

What strikes me as perplexing is how Houston can play with energy and focus in the first half only to quit a short time later. That’s a problematic and dysfunctional dynamic that Houston’s management team will have to take a long look toward once the offseason hits. There’s no excuse to allow a Warriors team without Curry to score 41 points in the third period.

Moving forward, the series shifts to Oakland. I can’t imagine the Warriors failing to close Houston out in Game 5 at home. That contest will be Wednesday, 4/27 at 10:30 PM ET.