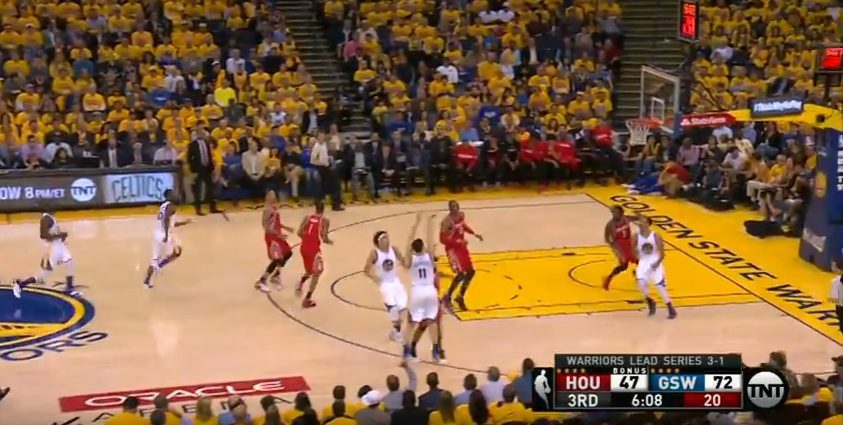 The Golden State Warriors throttled the Houston Rockets by a 114-81 score to take this series 4-1. With Stephen Curry out with ankle/knee ailments, others stepped up majorly.

Klay Thompson drilled 7-11 threes (10-14 shooting overall) on the path to 27 points. Draymond Green had a 15-9-8 line with no turnovers. Shaun Livingston continued his stellar efficiency with 16 points on 7-of-8 shooting. Most surprisingly, Brandon Rush had 15 points off the bench.

Overall, the Warriors shot 54.9 percent from the floor and 41.9 percent from deep. They totaled 9 turnovers. Houston, considerably worse in each area, went 32.6 percent from the field, 18.8 percent on triples, and had 17 turnovers. This is not an exaggeration – Houston put forth a pitiful and heartless effort. There’s no way a fan could watch Game 5 without coming to the realization that the Rockets are a hugely flawed and dysfunctional team.

James Harden shined early and got his numbers from the jump. He did have 7 turnovers, but the bearded one scored 35 points on 12-23 shooting. For an extended period in the first half, Harden was the only Houston player to even remotely resemble an offensive force.

Jason Terry, the man who guaranteed Houston would take Game 5 against the Warriors, had 0 points on 0-for-7 shooting. Yikes. Trevor Ariza, a usually productive player who had a nightmarish series, was 1-8 from the field and 0-7 on threes. Dwight Howard managed to snag 21 rebounds in his 45 minutes of action. However, he only went 3-13 from the field.

On Houston’s end, where to start? Howard likely walks, and the roster requires a massive overhaul. They shoot constant threes even though few players in uniform can make them. Chemistry and team unity are gigantic issues. Citing the source of these issues and ultimately addressing them is necessary for Houston to evolve.

Please continue to join us at The BMF as we cover some of these future NBA matchups.