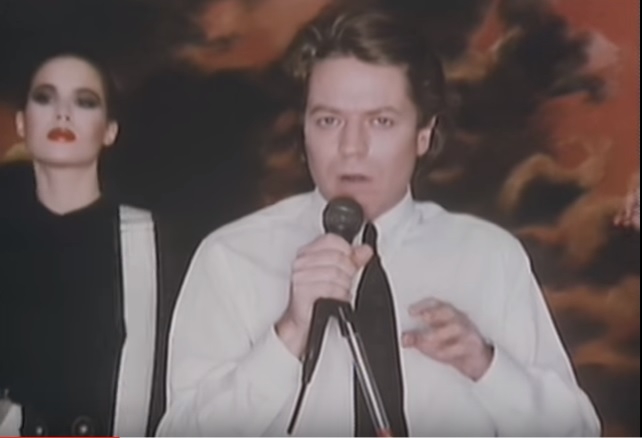 I hope everyone had a very exciting Cinco De Mayo Weekend. To commemorate it, I’ve got something fun planned for today.

What is it that you’re about to read: The Cinco De Mayo Weekend Billboard Challenge. Just read the title, homie.

Is Cinco De Mayo Weekend even a thing: I’ve been told it isn’t. Apparently it’s just a one day celebration. But we can pretend this is an entire weekend affair for like fifteen minutes, can’t we?

Why is this important: It’s not important, even a little bit.

What are the criteria: Hey, that’s a great question. There are six things that make a song “good” or “not good.” For the sake of this column, I’ve ranked those six things in order of importance and assigned each a number value from 1 through 6. If the respective song gets a check mark in a respective category, they get the number of points assigned to that category. Simple enough, right? Here are the four songs:

1986: Addicted To Love, by Robert Palmer

And here are the six categories:

Does it have a good music video? (One point)

Addicted To Love: Good would be a massive understatement … iconic is the best way to put it.

Always Be My Baby: Nothing too out of the ordinary or groundbreaking here; we’ve got a whole lot of Mariah Carey swaying back and forth on a tire swing, and that works just fine for two reasons: First, Mariah Carey is prominently featured and that’s pleasant. Second, when I was like six years old my cousin and uncle put up a tire swing at my grandma’s house on a big tree in the front yard, and that thing was so dope. I spent a lot of time just chilling on it, though I doubt I ever looked quite as graceful or beautiful on it as Mariah Carey does.

Bad Day: It’s basically the story of How I Met Your Mother, and I can live with that.

Panda: The video stars a man in a panda suit. It’s unequivocally perfect.

Is it the artist’s best song? (Two points)

Always Be My Baby: Yeesh, it probably is, though figuring out Mariah’s best song is like trying to figure out what music video Mariah looks the best in. I’d narrowly give Always Be My Baby the edge over Fantasy. Soo-Yung Han would strongly disagree.

Bad Day: It was definitely Daniel Powter’s biggest hit. Bad Day is the only D-Pow song that cracked the Billboard Hot 100, and I’m going to take that as an indicator that the quality of the rest of his work isn’t tremendously high. Less entertaining and catchy, yet probably equally as whiny and annoying. Bad Day gets the nod.

Panda: The only song on Spotify by Desiigner is Panda (plus a few remixes of Panda) so it might not be out of the realm of possibility that this is the only song that this fella (or fellas?) has ever made. So yeah, we can reluctantly call Panda the best Desiigner song.

Is it clear what the message of the song is? (Three points)

Addicted To Love: For sure. We’re looking at a gentleman who has been partaking in some insanely good sex with a desirable lady and he needs more ASAP because he’s in the process of going totally ape shit. His teeth are grinding, he’s got the shakes and the sweats … he’s falling apart. He’s completely and utterly addicted to love. Easy enough to digest all of that.

Always Be My Baby: It’s either the most adorable “lost love” love song that’s ever been made, or a super-subtle stalker anthem. Just check out the lyrics. It could go either way. I prefer option A.

Bad Day: Someone’s having a shitty day. We know this for a fact, and we’ve all been there. In all likelihood, this particular bad day was made even worse because the year 2006 and they probably heard Bad Day 14 times on the radio throughout the day. It happened to everyone at least once ten years ago.

I am a little confused though: In ten years I’ve never been able to figure out what perspective we’re looking at this bad day from. I don’t think D-Pow is the one having a bad day. Is he just observing someone else’s bad day and standing idly by as their life is crumbling? Is he a life coach of some sort? Should someone tell him that unless you’re seven years old kicking up leaves doesn’t create any kind of magic? Doesn’t this dipshit realize that if you kick through a pile of leaves you just have to rake them all again, and raking leaves is probably the worst thing you’ll ever have to do in your entire life?

Panda: Um, no. Here are my five favorite lines from Panda. If you can find a correlation between them please let me know. I’m eager to learn:

1: “Gorilla, they come and kill you with bananas”

This shit is wayyyyyyy over my head.

Was it/could it be one of the Billboard Year End Top 10 songs of its release year? (Four points)

Addicted To Love: Yes, Addicted To Love was 10th on the Billboard Year End Top 100 Songs list for 1986 despite the fact that it only grabbed the top spot for one week. And for what it’s worth, 1986 was loaded with great music. The number one spot was occupied by That’s What Friends Are For by Dionne and Friends, and you have gems like Sledgehammer (Peter Gabriel), You Give Love A Bad Name (Bon Jovi), Danger Zone (Kenny Loggins), Your Love (The Outfield), and Small Town (John Mellencamp) all coming further down on the list.

Always Be My Baby: Yes, Always Be My Baby was 5th on the Billboard Year End Top 100 Songs list for 1996, but it wasn’t even Mariah’s biggest hit of the year. Her collaboration with Boyz II Men on One Sweet Day finished third on the year end chart, and that’s a damn touching song and a serious as hell collaboration for 1996.

Panda: No, Panda won’t be one of the ten best songs of the year, per Billboard, God willing.

Will it/does it hold up well historically? (Five Points)

Addicted To Love: Absolutely. It’s a perfect pop-rock song. Great vocals, easy to sing along to so it will forever live on because of Karaoke, transcendent music video, and for as many times as it’s been remade, no version tops Robert Palmer’s … it’s the total package.

Always Be My Baby: The work of young Mariah has aged tremendously well and as we talked about earlier, Always Be My Baby might be her finest performance. Always Be My Baby will never go away … just like the stalkers who listen to it on repeat when they’re breaking into your house when you’re not home so they can smell your pillows.

Bad Day: It’s still played on the radio, though in the last nine years nobody has ever once been excited when Bad Day comes on. You can almost feel the collective positive energy get sucked out of the room as soon as you hear those opening piano keys. It’s the musical equivalent of being at work and stubbing your toe, then getting fired from your job, and then walking out to your car and seeing that you have a flat tire, and then shitting yourself while you’re waiting for AAA to show up.

Could you listen to it in a number of different social settings/emotional states? (Six points)

Addicted To Love: Well it was for sure a go-to song in the late-80’s bar scene in New York City. Cocktail taught us that. It also happened to be the go-to pump-up song last summer when my girlfriend Maria and I were on our way to our cruise ship to the Bahamas (Fun Fact: while we were on the cruise we met a lady whose father was a singer, and it turns out he opened for Robert Palmer on tour … she told us this unprovoked. The world works in funny ways). You could add it to a party playlist and it would fit right in, you could turn it into a “get back together” song with a former lover. And of course, you could listen to it if you were actually in the predicament outlined in the song and felt as though you were literally addicted to the lovin’ of a particular young lady. Like I said before, it’s the total package.

Always Be My Baby: As I’ve mentioned already, you could listen to this one if you’re planning on re-kindling a spark with a lover from your past OR if you’re getting ready to set fire to their home because they won’t take you back. Always Be My Baby doesn’t have a ton of depth outside of those two options though.

Bad Day: I haven’t come up with one social setting or emotional state where Bad Day betters the situation. Perhaps it makes kicking up leaves a more enticing project. I don’t know.