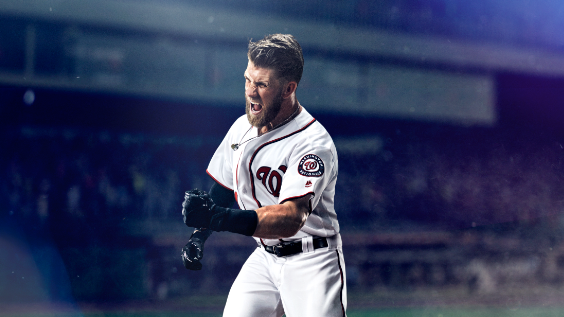 Baseball’s brightest and one of the most the marketable young stars, Bryce Harper, and leading sports and innovation brand, Under Armour, announce today a multi-year partnership extension. At 23 years-old, Harper has already established himself as one of the game’s hottest players on the rise, and earned the National League’s Most Valuable Player award after hitting .330 in addition to tying for the lead in home runs last season.

“Bryce embodies our brand’s founding philosophy of ‘Aggressive, Young and Fearless,’ and we look forward to continuing to aid in his upward progression in the sport of baseball,” said Peter Murray, VP of Global Sports Marketing at Under Armour. “We admire his heart for the game, and are proud of what he’s accomplished in the five years since he first teamed up with us at Under Armour. He has a bright future ahead and we’re really thrilled to be a part of his team on this journey.”

The Washington Nationals chose Harper as the first overall pick in the 2010 Major League Baseball draft. That same year, he won the 2010 Golden Spikes Award, awarded annually to the best amateur baseball player. In 2012, he won the National League Rookie of the Year Award and was chosen for the 2012 All-Star Game, becoming the youngest position player to ever be selected.

“I’m proud to call Under Armour my family, and I know that together, we will achieve great things,” said Harper. “Under Armour has been one of my biggest advocates since I began my professional journey, and I can’t wait to share what’s next with the fans.”

Under Armour recently announced its first signature baseball cleat with Harper, the “Harper One.” Featuring the ultimate combination of Under Armour’s pinnacle footwear innovations and Bryce’s personal input, the cleat is built to meet the unmatched demands of the reigning NL MVP. The first color way from the line will be available to consumers on July 15.

In addition, Harper will continue to play a central role in the brand’s marketing campaigns, including training and lifestyle offerings and Under Armour’s Connected Fitness™ platforms.