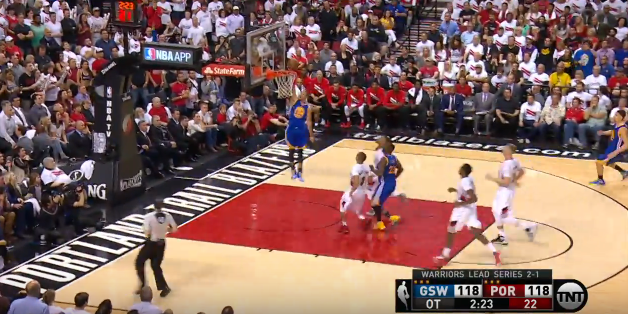 The Golden State Warriors and Portland Trail Blazers played a Game 4 that was nothing short of mesmerizing. Allow me to throw out a few plot lines that came and went.

There was Damian Lillard‘s early onslaught, one that made the Portland crowd go bonkers, as the Warriors resembled nothing close to its usual self and the Blazers built a double-digit first-quarter lead.

There was referee Scott Foster’s lunacy, a fine worthy display of horrid officiating that led to the mild mannered, Shaun Livingston, being ejected in a criminally unfair turn of events.

There was Stephen Curry‘s early struggles off the bench (he started 0-9) on threes… Then there was Curry’s 17 points in overtime (an all-time record).

One can’t fully assess this game without deeply analyzing the Foster lunacy. Livingston, who started this game even with Curry’s return, made a first half layup and was quite blatantly smacked on the head. An obvious foul, except it wasn’t called.

This caused the normally reserved Livingston to tear into Foster, a usually respectable official who had possibly the worst game an official could have in a playoff situation. First there was one technical foul, then another. In a swift moment, the Warriors lost a key player, one who had never been ejected in an NBA game prior to that moment.

What it did, however, was loosen the leash Steve Kerr presumably would’ve had on Curry. With Ian Clark and Leandro Barbosa as other options, Kerr basically let Curry do whatever he wanted.

But Curry had help. Marreese Speights had 11 points and went 3-3 on triples. Green had 21 points, 9 boards, and 7 blocks (he also went 9-10 from the line). Klay Thompson dropped 23 points and went 5-10 on threes. Andre Iguodala, in a stat line of 7 points/3 boards that won’t catch your attention, played unreal perimeter defense on Lillard and C.J. McCollum throughout the game, an effort that was massively instrumental in this Game 4 win for the Warriors.

This was a baseball game, essentially. It was damn near three hours. It felt like eight. Curry’s evolution within Game 4 was from rusty superstar to impossible to guard legend. He shocked Paul Allen, he outplayed everyone on the floor, and he sucked the collective soul away from the entire state of Oregon.

These Warriors are a remarkable group, and onward they march. Up 3-1, it feels that nothing can prevent a Game 5 win at home. That contest will be Wednesday, 5/11 at 10:30 PM ET.