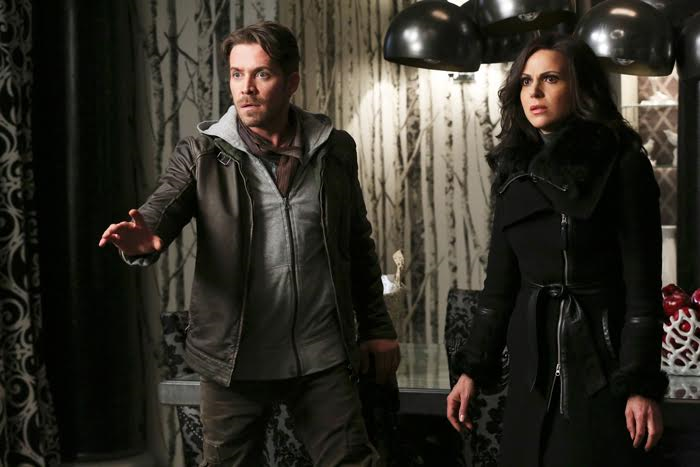 Next week is Once Upon a Time‘s finale, so in tradition of the show this season’s big bad had to go before they introduced a new one next week.

For that reason it was pretty predictable that Hades would be defeated this episode, even with all of the confusion of how exactly one defeats a God. But with some super impressive teamwork between Hook and Emma in Once Upon a Time, the gang figured it out.
While I’m still a bit confused as to why Henry couldn’t just rewrite the pages about Hades they needed — particularly after showing off his a similar ability he used to determine everyone’s unfinished business — I was actually intrigued by the Once Upon a Time logic that allowed for the Underworld storybook to be connected to the Overworld one. It was actually pretty cool how it worked out. That’s a first.
I was happy to finally see Hades and the Underworld go, even if it was difficult to see Zelena struggle with it so much. I always liked her, and with this new twist of actual trustworthiness I’m liking her even more. She didn’t deserve to be played by Hades like that, but I was proud of her for realizing that he would never be happy just with her. Plus, homegirl’s gotta learn that romantic love isn’t the only love, especially on Once Upon a Time, and with her new turnaround maybe she’ll actually be able to love and be loved like she’s always wanted.
One death I was not surprised by, however, was Robin’s. While I went into the episode totally convinced that Robin was safe (I didn’t foresee them doing that to Regina again), as soon as Robin told her she was his future I knew he was a goner. Be careful when you make promises like that, people. It’s like a pretty blonde in a horror movie saying I’ll be right back and then going to check on the mysterious noise in the basement.
I guess I can partly blame the predictability for why I didn’t even come close to tearing up when Robin died. Not to mention, I didn’t particularly love Robin as a character, so it wasn’t so much that Robin is dead, but the implications that come with his death that upset me. It was definitely hard seeing Regina lose another man she loved right in front of her, but the hardest moment to deal with was when they zoomed in on little Roland, who I’d almost forgotten about.

For that reason I found it super rude when Hook got brought back to life just moments after Robin’s funeral. If I were Regina I would be pissed as well, because Robin helped defeat Hades just as much as Hook did. It’s unfair to her that Emma gets her true love back, but Regina doesn’t. You could even argue that Regina has lost more people she was in love with on Once Upon a Time. I would have been ok with it had Hook not been brought back, because maybe when you’re a powerful heroine like that you don’t get to have a happy ending. But they went and screwed that theory of mine up.

It doesn’t help that I also didn’t particularly love this twist, because it makes it even harder to be sad about a death if people can just come back all the time. This was already a problem of Once Upon a Time‘s, but now even more so. Why did you make us mourn for Hook if he was just going to come back? Again.

Though most of the episode centered on the defeat of Hades, Rumple played a small role that opened up some doors for multiple possibilities next season. I was pretty surprised that Belle’s dad wouldn’t help Rumple wake her — although did he ever even mention the fact that she was pregnant? That may have changed things. One thing I’m not surprised about, however, is that Rumple had other plans.

I’m still not really sure what good having the Olympian Crystal will do for him to help save Belle, which should be his main priority, but Rumple’s always thinking five steps ahead. I’m not too excited that those plans appear to involve Evil Queen Regina, who I thought we had seen the last of. I don’t particularly enjoy the thought of going back to the beginning with her, especially because of all the hard work that’s gotten her where she is now. Regina is a compelling character even without having to make her evil again.
We’ll have to wait until next week’s two hour episode to find out how this plays out, and knowing Once Upon a Time, it’ll be a nail-biter nonetheless.