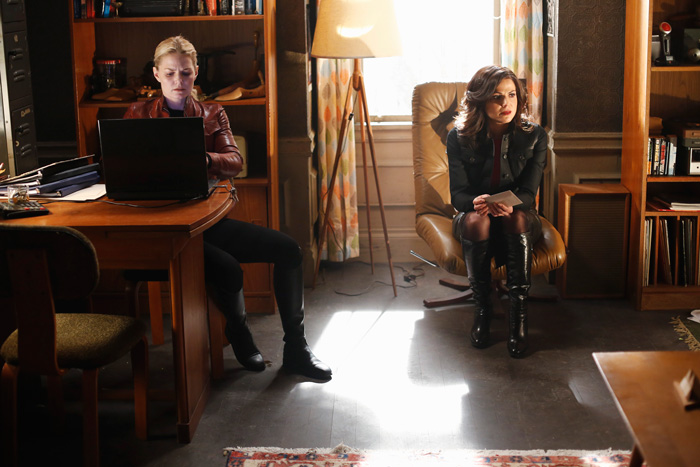 As another season of Once Upon a Time comes to an end, it’s time to wrap up this story and introduce the next. This week’s two hour season finale sent everyone from Camelot packing and introduced a twist that we haven’t quite explored yet.

I actually got lucky this week because, even though I was at work when Once Upon a Time started (as is usually the case), I got to sneak a few peeks of it playing on the TVs at the bar. My friend and I spent half of the first episode trying to guess who next season’s big bad would be based on the few interactions we got in between scenes of Henry and Violet making goo goo eyes at each other — I believe at one point I may have yelled something along the lines of, “I don’t give a damn about their hormones, who the hell is the warden?”

Our first few guesses were Dracula and someone related to Frankenstein. But seeing as Dr. Whale was Frankenstein, the latter seemed less than likely. We remained completely confused by all of the mentions of doctors and labs and the fact that, besides the aforementioned Dr. Whale, this was our first foray into a story not done by Disney.

As it turns out, Hook, Snow, David, and Zelena were transported to the Land of Untold Stories, where a certain Dr. and his split personality reside. Unfortunately it’s at this moment that Henry, despite being magic’s number one fan in the past, decides he’s going to destroy magic, thus trapping his grandparents, aunt, and future step-dad (the writers of Once Upon a Time must need a flowchart to keep all of this straight).

Like I said before, for the most part I was completely disinterested in Henry’s story line. Not only because of all of the hand touching Violet was doing or the blushing that brought out in Henry. It was also the fact that it was all a little too convenient — particularly the whole “we need something to destroy magic… oh look a Dark Grail, I wonder if that will work… oh goody it does!”

It seemed like Henry’s Operation Mixtape was a way to kill time in between what was happening with Dr. Jekyll and Mr. Hyde (parts one and two, but more on that later). I didn’t find this necessary, because if they hadn’t wasted our time with Henry’s temper tantrum and subsequent realization of his mistake it could have been a normal one hour episode. I do admit, however, that Henry’s speech at the fountain was incredibly well written and touching (if a little cheesy).

The most interesting part of the episode, however, was Regina’s inner struggle. We haven’t gotten much character development for Regina since she turned good, and it was interesting to learn that that’s not exactly what happened. Regina doesn’t want to be good, and even more than that she doesn’t like being good. However, she’s constantly fighting that battle to do the right thing because she doesn’t want to lose the people she loves. This tied nicely into the Jekyll and Hyde story line.

I was worried when they hinted that Regina may become the Evil Queen again, because I felt like it was such a big step back for both the character and Once Upon a Time, and one I wouldn’t have liked for that matter. That’s why I was excited to see that Regina, despite her first reaction always being influenced by the Evil Queen, didn’t want to be that person anymore, even if that meant her past karma would continue to haunt her.

I knew that Dr. Jekyll’s formulas would come into play as soon as he mentioned going back to Storybrook with them (I’m calling right now that’s what Rumplestiltskin will be using to wake Belle from the curse). I wasn’t too thrilled with the plan to separate Regina and the Evil Queen — we all saw how well that worked with Dr. Jekyll himself — but I had to admit it made sense. It meant that Regina wouldn’t feel trapped anymore, and it meant that we wouldn’t have to worry about her ever turning to the dark side again.

But it didn’t mean, apparently, that we’d seen the last of the Evil Queen. Logic got iffy again when she turned up at the end despite her heart being crushed, which usually does the trick. Maybe it’s harder to get away from your bad side than Dr. Jekyll thought (which sounds pretty obvious now that I put it that way).

This means that next season on Once Upon a Time we’ll be dealing with not one but two evil alter egos, who I’m sure will relish the company of one another. Throw in a couple dozen visiting citizens of the Land of Untold Stories, and a constantly deceptive Rumplestiltskin (who just so happens to know Mr. Hyde), and next season is already looking darker and less Disney than Once Upon a Time usually likes to get.

It’s sure to be an exciting season, and I can only imagine who the gang will run into next. One thing’s for sure, we’re past dealing with the witches and dragons of Henry’s storybook; it’s time for the other stories to get their turn.