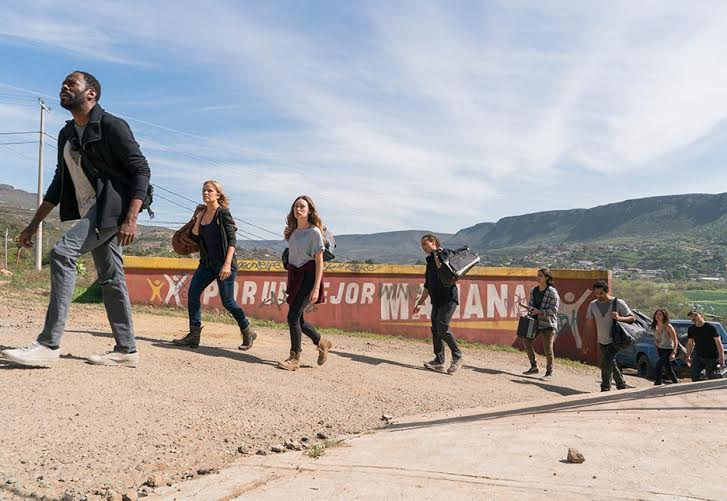 Well, this week’s episode of Fear the Walking Dead was a bit of a let down, which was super disappointing because of the promise it has shown during the past couple of weeks.

My main complaint with this episode, one that also relates to the season overall, is that it lacks flow. They jump from setting to setting and story-line to story-line without any real transition. They have been building up Strand’s compound in Mexico and how hard it would be to get to for quite some time. However, in this week’s episode it only took them about two minutes of screen time to get from the sea to the compound. It just seemed lazy of the writers to make it that easy for the characters.

Once they got to the compound, the whole dynamic of the show changed without any real transition for the viewers. All of the sudden there are new characters, rules, and plot points that we were just supposed to accept without question. I wasn’t a fan of how drastically everything seemed to change in this episode of Fear the Walking Dead.

From a character standpoint there were some aspects that I liked, but there were mostly components that I didn’t feel worked effectively. They’re giving Travis a backseat role in this season and that kind of sucks. He’s a great character but they are barely using him and he seems more like a bystander than anything else.

Meanwhile, I was correct in my prediction that Chris would eventually go bat shit crazy. In this episode we see him stand around and watch while Maddie is almost killed by a zombie. He also threatens Alicia not to tell anyone about the incident, and then finally stands over Maddie and Alicia holding a knife before they wake up and yell at him to leave. Travis doesn’t think it’s a big deal so far, but that was before the knife incident and something will definitely have to be done about him before long. This is going to cause some serious friction between Travis and the others, which I am not a fan of. Chris does suck, and I hope he does something drastically stupid and gets himself killed sooner rather than later.

It also seems like Daniel is starting to go off the reservation a bit, which is to be expected. He was always a little nutty but kept calm, cool, and collected. Now, however, it seems like he is becoming a bit more unhinged, and will be getting himself into trouble soon I’m sure.

Nick was another character who got some “development” that I wasn’t a fan of. He is becoming besties with Celia, who is the leader of the compound. She is one of those people who believe that the zombies are still people and can be saved. It seems like she is going to be able to convince Nick of this as well, which is just dumb. He needs to keep being the bad ass he was before. There is a reason he has survived as long as he has.

Overall, this episode of Fear the Walking Dead seemed to be all over the place and that made it hard to get into. They did set up some interesting plot points that I believe will lead to some good episodes later on in the season, but they need to accomplish that goal while also maintaining a high level of quality with the episode at hand. The future of the show depends on them creating great content each week, and not just setting themselves up for a few good episodes down the line. I still have faith in Fear the Walking Dead so let’s hope they don’t let me down.