If you read my Legacy Watch column from last week, you’ll know that I had big plans to write about the Russell Westbrook/Kevin Durant partnership, and the big picture ramifications of how the next month (give or take) of basketball turned out. That was the plan. And it’s still the plan for the not-so-distant future. But at the request of some fellow BMF’ers, I was called upon to tackle a more pressing issue than something so trivial like “What would an NBA Title do for the legacies of Kevin Durant and Russell Westbrook?”

Today I’ll be critiquing the best outfits that Russell Westbrook has worn throughout his illustrious NBA career.

I’m sure you’re wondering why I’m qualified to conduct such an examination. It starts with my impeccable style. On an average day I’m typically lounging around in a cut-off shirt (like, the sleeves are cut-off; I don’t quite have the physique to wear an Ezekial Elliott cut-off) and gym shorts. When I need to look presentable I usually opt for cargo shorts and a t-shirt with a pair of Nike’s that you could hardly call flashy. Every once in a while though (typically when there is a dumb amount of alcohol involved) I’ll step out wearing a Westbrook-esque get-up like this one: 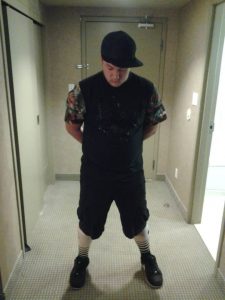 So I’ve picked seven fun outfits and I’ll be offering an overall evaluation of each look. On top of that, I’ll also be giving a rundown of the alcoholic beverages I would have to consume before I truly felt like I could rock it as well as Russ does in public. 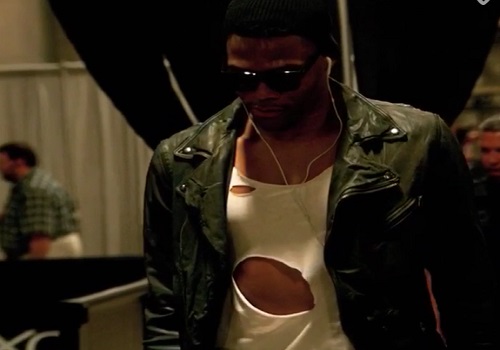 Image Courtesy of In Flex We Trust

Evaluation: I mean, the shirt is ripped. It looks like there was a manufacturer defect. I would assume Russ wanted it to be this way, but I just don’t understand why he’d wear a shirt that looks like the shirt you keep in the trunk of your car and use as a rag to check your oil and do other car-fixing shit like that. I’m really loving the rest of the look. I’m all about wearing beanies and sunglasses indoors when there is absolutely no real need for either.

Drink Counter: I’m not trying to fool myself; I’m way too doughy and possess way too much chest hair to wear this shirt with any confidence at all. If I could zip or button up the jacket it’s a different ball game. I’d probably just enjoy a few red bull and vodka’s before I left and I’d be all set. But if I were to wear the outfit as Russ wears it, I’d have to forgo all drinks that I actually enjoy and start ripping shots of Tequila so I became so incoherent that I didn’t even realize I was wearing a shirt that left my underboob exposed to a number of people who I would guess don’t want to see that. Evaluation: The jeans and the shoes aren’t the issue here. I wear jeans (baggier ones) and I wear boat shoes (less flamboyant ones). However, I don’t usually wear t-shirts that look like something Dexter Morgan would analyze. That’s not so much a personal choice. It’s more like I have no idea where I would find a shirt that looks like this other than in evidence lock-up at Miami Metro Police Department.

Drink Counter: I don’t think I’d need to have any alcohol flowing through my bloodstream to wear that shirt. I really like Dexter a whole bunch, so it would make a lot of sense for me to have a shirt that would be like a prop from the show. On second thought, after putting on the shirt I’d drink some Champagne. If I could get my hands on a Dexter prop I’d feel the need to celebrate with a bottle of cheap Champagne. 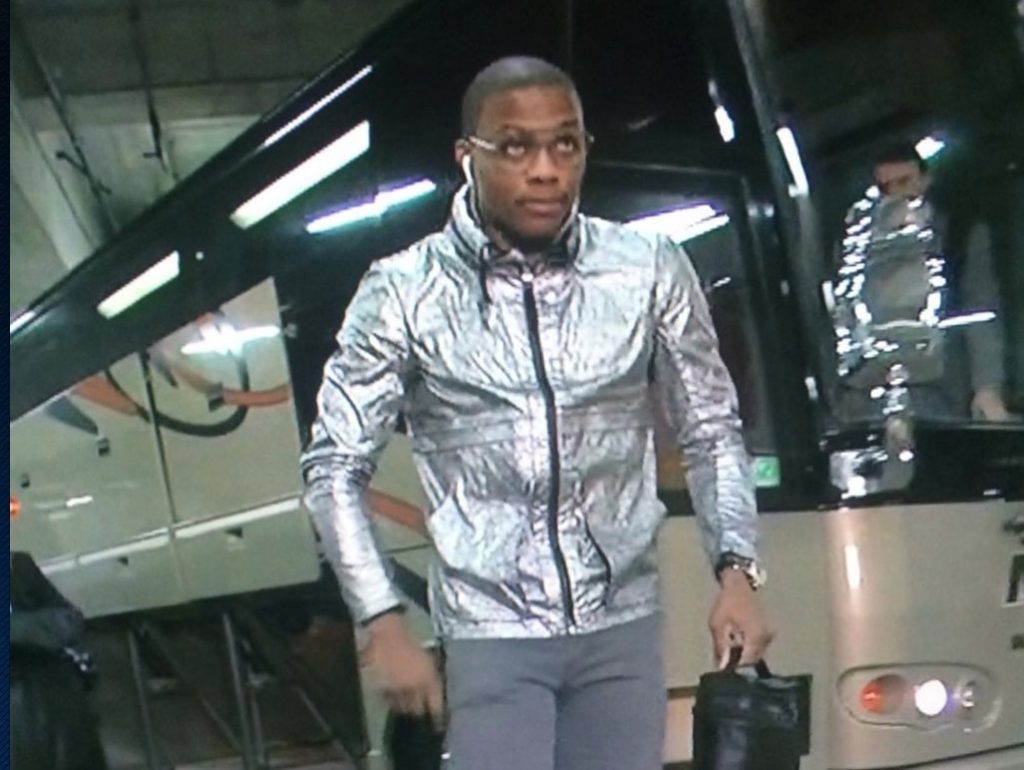 Evaluation: You can’t see much of his pants, but based on the fashion choices Russell Westbrook typically makes, we can assume that they’re tight as hell and super uncomfortable looking, and like I said before, tight pants aren’t really my cup of tea. The jacket is equally tight, and it looks something Chuck McGill would absolutely love.

Drink Counter: This isn’t a normal outfit or anything. It resembles a space costume more than it does everyday human being clothing. And if I’m going to wear a space costume out in public, I’m probably going to need about seven Coors Lights and maybe three or four Incredible Hulk shots (Hypnotiq and Hennessy) before I’m stepping out the door. If I were able to get my paws on the baggy version of this outfit we can probably take away two beers and one shot. Comfort is everything in fashion for me. But either way, it’s a space suit. 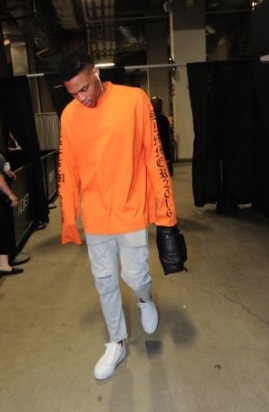 Evaluation: Just look at how pissed off Russell looks in this picture. He’s like a miserable little kid with a “Shit, I have to wear these crappy ass hand-me-downs that are way too damn big for me” look on his face. Look how long those goddamn sleeves are. That can’t be purposeful. Somebody definitely thought this shirt was going to Kevin Durant and not Russell Westbrook.

Drink Counter: At least the pants and shoes Russ picked for this outfit wouldn’t be a bitch for me to wear. The shirt is a real problem though. If you’re going out drinking, it’s critical that you have the use of your hands at all times and this shirt seemingly restricts that specific bodily feature. Plus, a big pet peeve of mine is looking like an idiot because your shirt doesn’t fit right. I would be in my own head all night wearing a shirt like that. The best way get out of my head would be to skip right over Jagerbomb shots and go right to the Collin Stucko Special … Jagerbombs on the Rocks. Five or six of those bad boys and I wouldn’t care one tiny bit if I were wearing short shorts, a big hat, shoes that are too small or this goofy long-sleeved shirt. 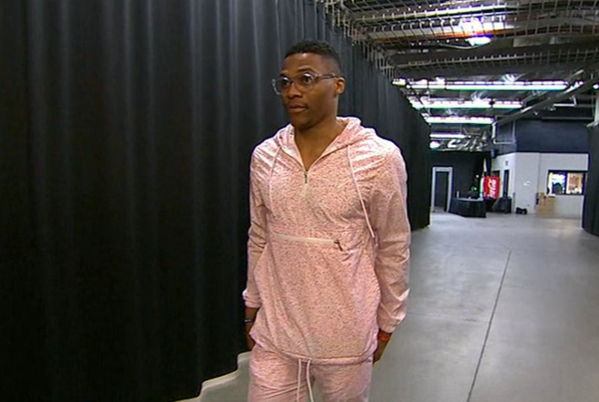 Image Courtesy of Next Impulse Sports

Evaluation: I don’t think I’ve ever seen an outfit look comfier than this one does. Where do I buy these pajamas? Are they on the JC Penney’s website or do I need to go somewhere a little more high-end to find them?

Drink Counter: When I was in high school I routinely wore my pajamas right out of bed to school, so this wouldn’t be a huge stretch for me. Wearing PJ’s out to a bar though … it’s a totally different ball-game (though, at this point in my life, having a long-term girlfriend and all, wearing pajamas to a bar sounds more appealing than ever because I have literally nobody to impress there) I’d probably need a two or three Kahlua and Cream’s before I went out. And the good news is if I changed my mind and decided to skip going out and just go night-nights, then the Kahlua and Cream’s basically serve as alcoholic chocolate milks, and chocolate milk before bed is always a great life decision. 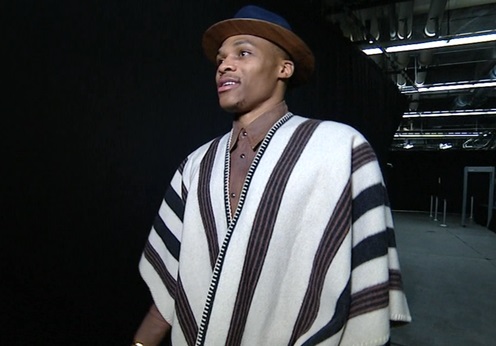 Evaluation: So the fedora is on point (When I was in Nassua, Bahamas I tried on 248 fedoras because I wanted to buy a fedora in the Bahamas, because apparently, in my mind, Nassau was the fedora capital of the world … I couldn’t find a single damn one that fit my head, but I still bought one because I’m a dummy). I’m really confused by what Russ is wearing on the upper half of his body. What do we call that? Is it a cape? A cloak? A poncho? A blanket? A throw rug? A towel? Let’s run with poncho.

Drink Counter: We call my cousin Phil “Poncho”, so this one is a dedication to him. A few years back he introduced me to a delicious alcoholic concoction that we’ve named “Splash” which combines Bacardi Limon and Monster Rehab. After half a dozen strong “Splashes” I’d be ready to wear that Beetlejuice Poncho with pride. And I’ll forever be on the lookout for a fedora that fits my oversize dome as well as that fedora fits Russ. Just know that if you’re in the Bahamas and you have a larger than average head, you aren’t going to find a fedora there.

WARNING: Don’t EVER mix Bacardi Limon and Monster Rehab. I had a few too many “Splashes” in Miami on Spring Break two years ago and I think I shaved four and half years off my life expectancy because of it. Evaluation: This is by far my favorite Russell Westbrook outfit you’ve seen here today. It resembles actual human clothing, and he pulls it off gloriously. I once wore a white tuxedo to my Senior prom and I’ve probably never looked cooler than right then. Russ is wearing a white shirt, white pants, white shoes, a nice watch and a gold chain, PLUS a jean jacket. Good God. Russ got someone pregnant the night he was wearing this.

Drink Counter: I’d be knocking back shot after shot of Rumple Minze just so I felt as cool as a fucking glacier when I went out, because that’s exactly what I’d look like … a literal fucking glacier.