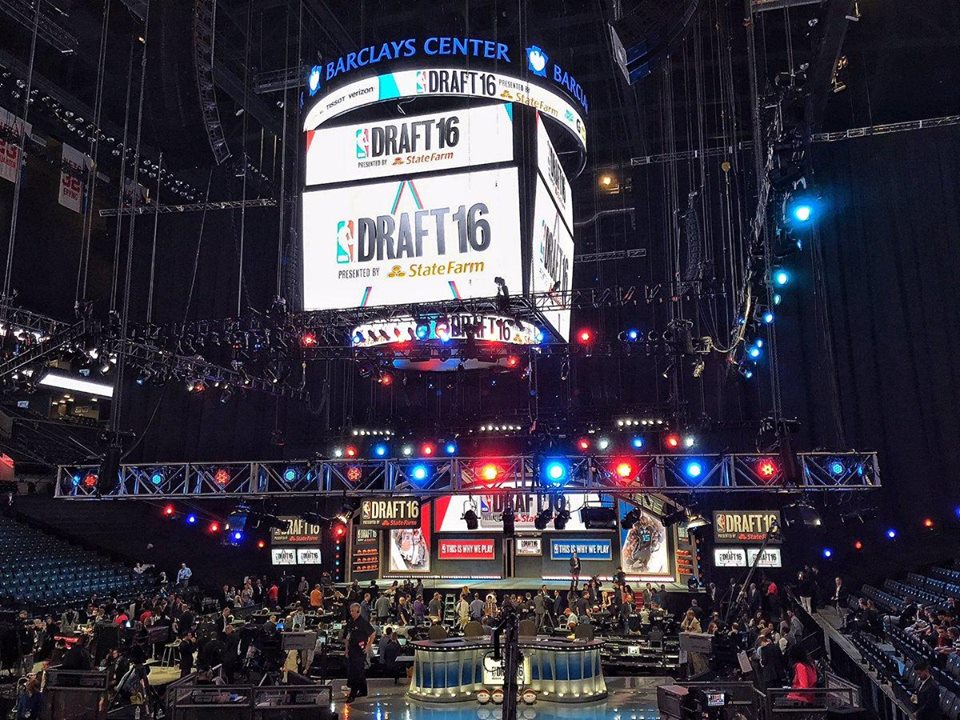 Image Courtesy of NBA on ESPN/Facebook

Fun fact: Two years ago today I was asked by the editors at The BMF to write a Winners and Losers of the NBA Draft column. It would be the second column I ever wrote for Baller Mind Frame. I didn’t write a Winners and Losers of the NBA Draft column. I decide to remix the original idea and discuss the winners only. Here was my rationale for doing so, aside from the fact that the 2014 NBA Draft was being touted as one of the most loaded in NBA history and it was genuinely difficult in the moment to identify a team that didn’t appear to improve their position in the league: it’s nearly impossible to know what to expect from any of these prospects at the time of the pick. It’s not reasonable to think that every pick will work out well, but you don’t usually consider the worst case scenario for each selection. From a fan’s perspective, you contemplate the ceiling of the pick, and the likely reality of the pick, and that’s it. And that’s fine. It’s my belief that in a situation like this, where there are rarely clear-cut losers, it’s more beneficial to be an optimist than a pessimist.

Last night, three minutes before it started, I accepted the call to once again recap the NBA Draft, and once again I’m more focused on the teams, players and inventors (just wait) that came out on top. But before we get to the many winners, let’s tackle the five biggest, and most easily identifiable, losers of the draft.

The Hawks turned Jeff Teague into Taurean Prince, and in a week Al Horford might turn into a gaping hole at Center in the Hawks starting line-up if he decides to leave in Free Agency. The Hawks have been perennial winners in this sort of early-summer column the last few years; just not the case this year.

This isn’t a full-blown catastrophe for the Celtics, especially since there is a belief among people who know a lot about these the foreign prospects that Boston drafted (Guershon Yubusele and Ante Zizic) will eventually materialize into playable pros. With that said, there’s no way that Celts fans could be pleased with how things went down. Boston had 49 picks in this draft (approximately) and a treasure trove of assets on their roster, and they ended up reaching for Jaylen Brown with the 3rd pick and they failed to turn any possible package of picks and players into a superstar or pseudo-superstar.

This is the kind of tweet you send out before you take the Bar Exam, or when a loved one is in the hospital, or if you’re about to compete in the World’s Strongest Man contest. Boogie Cousins sent this out after the Kings drafted a Greek center 35 picks too early. #FreeBoogie

Just a complete and total disaster of a trade for Orlando. Even if Serge Ibaka was locked into a long-term deal, the Thunder still won this trade. But here’s the kicker: Ibaka is a free agent next summer, and there will be plenty of contenders with cap space that will be willing to throw a lot of money at a seven footer than can shoot and protect the rim. Unless Ibaka is a huge fan of Walter Elias Disney, then I don’t see this being anything more than a one year rental for the Magic.

The biggest loser of the night. The 76ers did him dirty, and nobody can tell me otherwise. Whether or not “The Process” was fully a Hinkie idea or not doesn’t matter anymore; the Sixers purposely and unapologetically sucked for three years so that they could stockpile assets and eventually cash in once things fell into place. Hinkie took the brunt of the criticism throughout this process, urged fans to remain patient, and then just months before it was time for the Sixers to cash in, they ran Hinkie out of town. Shrewd.

Essentially, they’re getting Ben Simmons, Joel Embiid and Dario Saric in the blink of an eye, and they still have a move to make (I still think either Jahlil Okafor or Nerlens Noel will be moved) and they have cap space. You see that last “and”? It’s in bold and it’s italicized. I would buy 76ers stock, and bet the over on their win total next year if you’re a Vegas type of guy.

I heard five different comparisons for Bender last night: Kristaps Porzingis, Nikoloz Tskitishvili, Draymond Green, Andrea Bargnani and Silly Putty. I have literally no idea what to expect from him next year or over the course of the next fifteen years, but I’m downright giddy to find out.

I did a quick Google search on the creator of the Bow Tie, and it looks like 17th Century Croatian Mercenaries get the credit for sparking this fashion trend; a fashion trend that was incredibly popular among 2016 NBA Draftees. So, props to the Croats.

The University of Michigan product was selected much higher than anyone expected (mainly because of nagging foot and leg injuries), and he had the dopest jacket of anyone in the Draft. I’ve tackled NBA fashion once before for BMF, so needless to say I’m extremely qualified to crown LeVert as the best dressed player at the Draft.

As soon as Kentucky inevitably gets busted for a whole bunch of rules violations Coach Cal has a nice in with the Phoenix Suns. There are five Kentucky guards on the Suns roster right now: Eric Bledsoe, Brandon Knight, Archie Goodwin, Devin Booker and Tyler Ulis, who the Suns stole in the 2nd Round. I love it.

I don’t care what anybody says … the Thon Maker pick was tremendous, and I’m not just saying that because the Bucks are going to have a million miles of wingspan on the floor at all times. It didn’t totally make sense to me that the YouTube sensation was slated by many to be a late 1st Round Pick when the consensus agreed that the “sure-things” in the draft were gone after the 8th or 9th pick. Why not start drafting for ceiling at that point? Why ignore what made Porzingis such an intriguing prospect just a year ago? Why stress about whether Thon Maker was 18-years-old or 25-years-old? Have you seen how long this motherfucker is? Don’t you see that he already has an NBA jumper?

In a less sexy (or polarizing) move, the Bucks also got Malcolm Brogdon in the 2nd Round, who is right there with Ulis as the biggest steals in the Draft. I need someone to talk me out of Milwaukee winning 50 games next year. Seriously, start bugging me about it now.

I’m conflicted about Kris Dunn; on one hand, he cried when he was picked, and any guy who is that overcome with emotion when he finally finds out that he’s going to be a pro is a guy I can get behind. On the other hand, he finished his post-pick interview talking about his Gucci shoes. On the third hand (yep, I’m bringing in a third hand here) the Wolves drafted the best all-around player outside of the consensus top two in this draft, which means they now have a legitimate backcourt (Dunn and Andrew Wiggins) and the best young big guy in the NBA (Karl-Anthony Towns) playing for a coach who will get the most out of all of them, particularly on the defensive end, even if he runs them into the ground in the process.

I’m probably in the minority here, but I think there’s a 20 percent chance that ten years down the road we’ll look at Buddy Hield as the best pick in the 2016 Draft. He possesses NBA level shooting (as a spot-up shooter and off the dribble) and explosiveness, and only Minnesota would have been a better situation for Buddy right out of the gate. In New Orleans he’s paired with a big that needs to be double-teamed every time he touches the ball, and that means he should get quite a few good looks on the perimeter.

If the Celtics had the draft that the Nuggets just had we’d be calling Danny Ainge a genius and declaring Boston one of the big winners of the 2016 Draft. Juan Hernangomez could be a nice stretch four somewhere down the line, but adding Jamal Murray and Malik Beasley (two NBA caliber shooters) to a core that features two 21-year-old international Centers (Nikola Jokic and Jusuf Nurkic) and Emmanuel Mudiay was a great step towards building a young team with some quality pieces in the Mile High City.

This is a Serbian basketball team and their uniforms are Pink and Apple Green … how fucking amazing is that? Did you guys see those uni’s Timothe Luwawu-Cabarrot highlights? I want to know the name of the Serbian Pimp who picked that color scheme and designed those uniforms. I’m gonna learn how to speak Serbian just so when I congratulate him on those choices he’ll know precisely what I’m saying.

All things considered, I really don’t think the last two days have been too terrible for the Chicago Bulls. They turned Derrick Rose into Robin Lopez, Jose Calderon and Jerian Grant (the best piece in that deal) and with the 14th pick they grabbed Denzel Valentine, who should contribute so long as his knees are more reliable than Brandon Roy‘s. The Bulls needed a close-to-complete overhaul, and this was a great start. I wouldn’t move Jimmy Butler just yet. Remember, the cap continues to rise this summer and next summer, and Chicago is still an attractive market. If you move Butler, you’re getting rid of a top twenty player in the league and leaving yourself without a proven stud that can help when it comes time to attract free agents that are looking for situations where they can win right away.

The biggest winner of the night and they didn’t even have a 1st Round pick coming into the night. Somehow, Sam Presti Jedi mind-tricked the Orlando Magic into giving up Victor Oladipo (the number two pick from three years ago), Ersan Ilyasova (a throw-in, but someone who is good enough to be the 9th best guy on a title contender) and the 11th pick in this Draft, which turned out to be Domantas Sabonis (my favorite big guy in the entire draft) for Serge Ibaka.

Now sure, it’s not like OKC fleeced Orlando into trading for a bum. Ibaka has value. He’s a seven footer than can protect the rim and hit open jump shots, and he’s only 26-years-old. The problem here is that Ibaka only has a year left on his deal and Orlando has to bank on him sticking around for longer than 12 months if they ever want this deal to look like anything but a one-sided robbery. I’m dubious that he will.

Here’s the kicker: Kevin Durant is a free agent this year. And if he decides to leave Oklahoma City we’ll soon forget about this trade. The NBA is goofy like that.