When it comes to the buddy comedy genre, there’s possibly no one better than Shane Black to pen and direct the flick. He’s the man that wrote Lethal Weapon, and created Kiss, Kiss, Bang Bang. Black’s writing is as crisp and intelligently sarcastic as ever, as he masterfully allows us to root for the losers. Jack Healy and Holland March become fully developed characters through the course of some wild adventures in 1977 Los Angeles, including a run-in with mermaid strippers, peculiar thugs, and a possible government conspiracy.

From the snazzy, colorful wardrobe to the vintage feel of each scene, the film looks like pop art. The vibrant settings of the film match the wild and heinous characters that overshadow the plot. Sometimes certain details of the crazy story are missed because the characters are just too entertaining; however, it all works together well in the end. Nearly every line is quotable, and delivered by an awesome pair of gentlemen with tremendous onscreen chemistry. 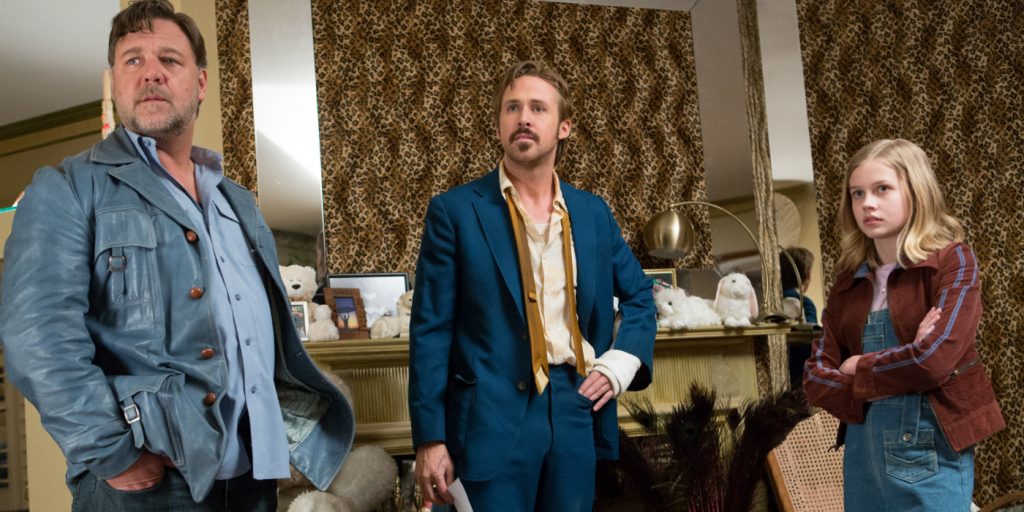 Russell Crowe plays Jack Healy, a tough guy for hire with a heart of gold. He’s a bit plump these days, but definitely rough around the edges, and he shines as he stains his brass knuckles with blood. We feel sorry for Healy because he comes off as such a fair man in a crumbling world, making him easily likable. However, Healy is at his best when interacting with Holland March, his partner in anti-crime.

Ryan Gosling as Holland March, an alcoholic private eye, is one of his best roles to date. Mr. March is married to alcohol, yet underneath all the filth and screw-ups, he’s a good man with solid detective skills, when he’s not completely hammered. Gosling shows off his talent in physical comedy, and his ability to make a wacky character relative, even with just moments of dramatic connection.

Besides the two leading men, who make one of the best duos in the last decade, Angourie Rice also shines. Rice plays Holland’s daughter, Holly, and does so with such a righteous and intrepid approach that she becomes the extra gem of the film.

Shane Black has perfected his template for making his brand of film with The Nice Guys, and we’re all now eagerly waiting for a sequel (direct or spiritual successor). Beneath the smog of entertainment, The Nice Guys pays tribute to the do-right men in the world that have seemingly gone extinct or are possibly dormant. The film proves that The Nice Guys don’t always finish last.