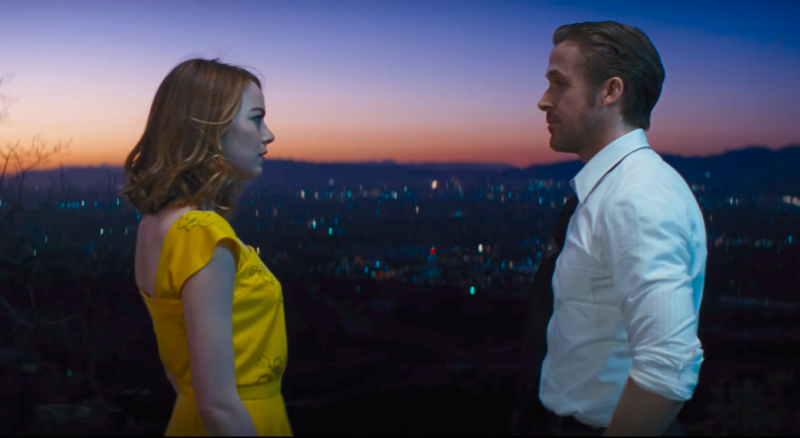 The musical was dying in the world of cinema until Damien Chazelle’s rebirth of the genre through La La Land. The film tells the story of Mia, a struggling actress trying to get her big break, and Sebastian, a talented jazz pianist trying to pursue his goal of opening a jazz club. They find each other through chance encounters, and fall in love. The film has all the vintage accents of classic Golden Age musicals with a story about love and passion that’s relative to anyone that’s ever tried to follow their dreams. This sweeping, romantic musical stars Ryan Gosling, Emma Stone, and John Legend.

Damien Chazelle writes and directs the hell out of this film. Every song is an invitation into the feelings of the characters, and every performance is given realistic context to make it that much more meaningful. When the characters break out in song and dance, it’s not corny because it’s too sincere to be, which makes it a captivating experience.

This film is pure magic, beautifully shot with the city of Los Angeles filtered through the eyes of a dreamer. For example, there’s a scene at the Griffith Observatory that feels like a mesmerizing painting come to life, as the characters ascend into the stars while they fall for each other. The film expertly takes us through the realistic successes and failures of Mia and Sebastian’s relationship, and has one of the best endings this year with a musical number that encapsulates the power of a song that stems from life experiences. The entire relationship is captured in every single note of that song. The two leads are absolutely perfect for the inspiring script, bringing the characters to life in memorable ways.

Ryan Gosling shows us that he is an actor of commendable range, playing the bold, unyielding Sebastian, a jazz pianist passionate about his craft and its history. Gosling sings with a reassuring voice, and is nimble on his feet with the dance numbers, tapping away with charm. Most importantly, his chemistry with Emma Stone is electric. Gosling feels honest in his every word and step about jazz and about Mia, the struggling actress played by Stone.

Mia has gone through numerous rejections over several years in trying to make it as an actress, and is on her way down the drain until she is sparked by Sebastian’s intrepidness to make his dreams a reality. Stone has a beautiful voice with the dancing shoes to match, and along with Gosling, is hilarious. They take us through an honest look at a relationship where they support each other to do what they’re passionate about.

If you love something enough, the act of doing it is the ultimate expression of truth, regardless of what this social-media-worshipping world thinks, and it should be valued for as long as you can breath. La La Land is inspiration to stay faithful to what you’re passionate about, as well as to be someone’s Mia or Sebastian to help others stay the course where so many sell their dreams away for dollars.