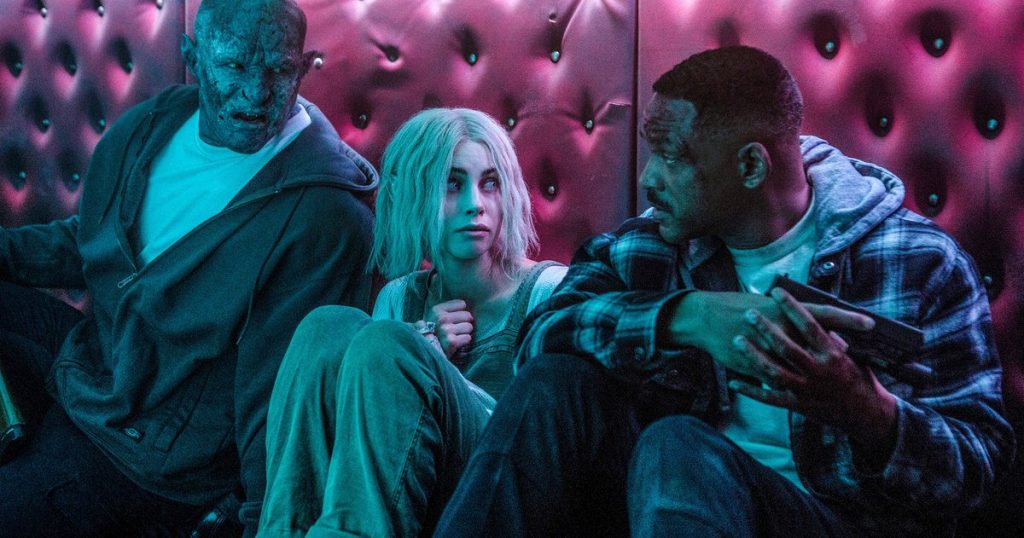 When magic hits the mean streets of Los Angeles, the buddy-cop genre gets a new twist. Written by Max Landis and directed by David Ayer, Bright is a new take on a classic formula. A human cop named Daryl Ward is forced to work with an orc cop named Nick Jakoby, and they run into a magical wand that everyone is after, including a group of powerful elves. The cast is filled with talented actors, including Will Smith, Joel Edgerton, Noomi Rapace, and Lucy Fry.

Mix fantasy, crime drama, a buddy cop movie, and social commentary together and you pretty much have Bright. It boldly mixes different elements, and on paper seems daring enough to work, but it simply doesn’t. David Ayer doesn’t know how to balance everything, and we’re left with an odd film.

The story isn’t hard to follow, but it’s all over the place. Sometimes there’s random expository dialogue to make sure the audience is still on track with the plot, but the characters aren’t built well enough for us to care much. Ayer is great at tackling the life of cops and thugs, but he’s bitten off more than he can chew here because of the extra layers. Even the dialogue seems off, as there are odd placements for the F-bomb where it doesn’t seem natural. There are some jokes that will get a chuckle, but nothing past that. The humor in the film misses more than it hits. It feels like the beginning of a TV series, and not an actual movie.

In terms of action, this film does okay. There isn’t anything that feels fresh about what they do, but they try to make it gritty and thrilling. Since the story isn’t engaging and the reveals are predictable, there’s no real weight when the bullets and spells go flying. Ayer is far from his prime form in films like End of Watch or Fury.

The performances are solid, but nothing amazing. We get what we expect from Will Smith and Joel Edgerton. Edgerton does pretty well under all the prosthetics, and Smith plays a veteran cop with ease, but the two don’t click. They’re not supposed to like each other, but there has to be something there to project them as an engaging duo. The chemistry of the two leads isn’t very strong, so it’s hard to invest in whatever situation they’re in. Nick, the Orc, played by Edgerton, is easier relate to because he’s the rookie cop that isn’t accepted on either side of the fence. The elves look amazing, especially Noomi Rapace and Lucy Fry, but they aren’t given much character development. Ultimately, their roles are wasted.

Bright is a fresh idea that was executed poorly. Many people love the fantasy genre, hard-nosed cop films, and magic. It’s possible that there is a movie in the future that will mix those elements together well, but Bright isn’t that flick.