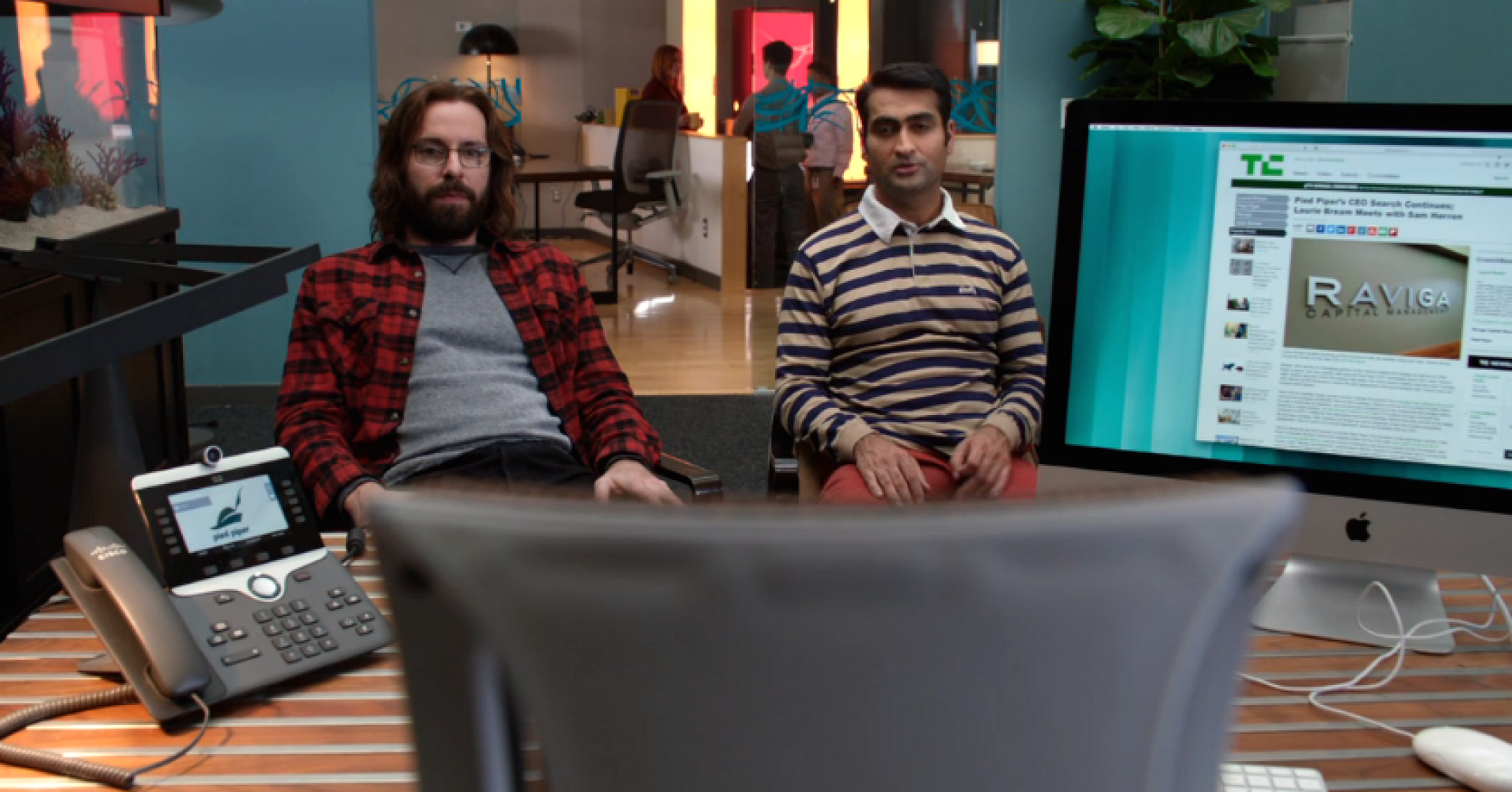 Let’s get this straight: Richard Hendricks saying “my male ego has nothing to do with this” was the funniest thing that’s ever happened on Silicon Valley. This season has been all about tearing apart Richard as a hero– thankfully, without getting over-the-top meta like many sitcoms these days tend to after the first couple seasons. Moments like Richard’s phone call with Laurie Bream perfectly question why we’re even rooting for him.

Part of the reason this scene– and the episode in general– worked so well was the character of Laurie. While Carla Walton more explicitly existed as a vehicle to talk about sexism, with extremely mixed results, Laurie’s always been written with a subtler touch. This episode (written by Megan Amram) really allowed us to see all the ways in which Laurie has always represented a contrast to Richard’s male ego. He’s offended at the very idea of having to look presentable for one interview, while Laurie has never had the freedom the male characters we see do to show up to work disheveled every day. We know from episode 2.2 that she spends time reading up on how to dress in different business situations specifically to navigate male egos. While Richard expects to be a CEO at age 26, Laurie didn’t become managing partner at Raviga until much later in life. It’s also highly implied that her career was held back by seeming cold, while Peter Gregory was able to build his own company despite being cold and awkward in comparable ways to Laurie. In the season 3 premiere, when Laurie advised Richard to be happy that Pied Piper is fully funded and that he still gets to be CTO, this wasn’t a successful person smugly looking down at him, it was someone who’s always known they’d have to be patient and work harder than everyone else for less talking to someone who has been conditioned to expect success with relative ease. All these aspects of Laurie have always been there, but seeing her reaction to him insisting his male ego has nothing to do with this really brought it all together.

The episode continued to play off the dynamic so perfectly set up during Richard and Laurie’s phone call. In the episode’s big set piece, Richard talks to a reporter named C.J. Cantwell. He thinks that she’s the PR person that Laurie has insisted he prep with. Richard is, of course, pissed at the very idea he might have to prep for an interview and he goes on a rant about this. The whole rant is great, but the fact that he calls Laurie “Laurietron 3000” really stood out to me. Richard acts like it’s a personal failing on Laurie’s part that she’s not able to emotionally coddle him. He declares that she’s incapable of admitting when she’s made am mistake and this is brilliantly intercut with Laurie telling Monica Hall that she’s realized she made a mistake and would like to install Richard as CEO.

This whole season has been about questioning why we should even root for Richard to succeed. The answers this question provides is simple: because the people writing his story are really, really good at telling a story.

Regardless of whether you think Richard deserves to be CEO of Pied Piper, hearing Laurie say that she’ll be installing him in the position as long as he doesn’t screw up intercut with him ranting to a reporter was viscerally painful. After this massive mistake on his part, he asks C.J. what he could do to keep her from running the story. She says the only way he could do this is to find her a better story.

The episode’s structure organically manages to have Big Head happen to be at the house while Richard is spiraling and trying to fix his mistake and, equally organically, Big Head brings up Gavin scraping negative mentions of Nucleus from the Internet. This pay off works incredibly well, creating an exciting moment of happiness that things are looking up– again, regardless of whether you believe Richard deserves to succeed.

Like the season 3 premiere, this episode really calls attention to the strange duality of watching this show. You can be fully aware that Richard isn’t a true underdog and that someone like Laurie has a more compelling story to tell, but the fact remains that Silicon Valley does a better job than almost any show around of constructing a story exciting enough for you to get invested.

The subplot with Erlich Bachman starting a company with Big Head felt a little off to me. Erlich being an outright bully taking advantage of someone felt out of character to me. It’s not that he’s not willing to get tough with someone to get what he wants, but I feel that more than anything Erlich wants respect and he sees himself as a truly intelligent entrepreneur. He seemed very aware of the fact that he’s just pushing Big Head into giving him money, which almost seems like an admission that he’s not the shrewd businessman he sees himself as. It’s a pretty subtle line to walk, but I just didn’t buy Erlich’s actions in this episode.

The third plotline with Jared Dunn, Bertram Gilfoyle and Dinesh Chugtai accidentally selling a hard drive with Pied Piper’s IP on it was a simple plot that worked well. The dynamic between these three has always been really strong– they have a nice pragmatism that is in direct contrast with the plots driven by Erlich and Richard. While the main plots of this show are driven largely by emotion and ego, Jared, Gilfoyle and Dinesh all share a nice focus on just fixing the problem at hand. Instead of this plot turning into a back and forth about who’s to blame, Gilfoyle admits guilt in the form of looking slightly ashamed while shrugging at Dinesh, then does some light breaking and entering to destroy some property. The plot also included some quality jokes, like Jared asking if Dinesh has ever seen a naked dead body. Kumail Nanjiani perfectly delivered Dinesh’s response, “No… No. No!”