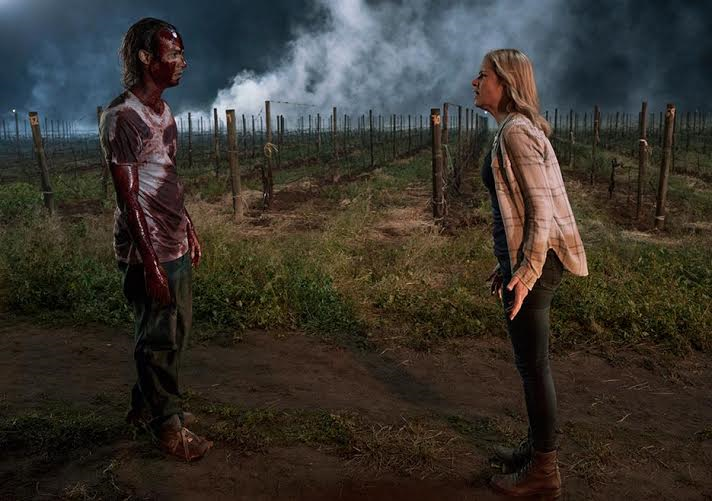 Fear the Walking Dead aired its mid season finale this week, and I honestly was not that impressed. Now, this could be since I just recently watched Game of Thrones and they aired what is probably the best episode of the series so far. Although it is unfair to compare them, I can’t help it and the inevitable result is that Fear the Walking Dead suffered accordingly.

Another reason I wasn’t a fan of this episode is because they are ruining all of my favorite characters. I’ll start this little rant with Travis. He used to have so much potential to be a bad-ass, and the writers of the show are slowly but surely taking that away.  He leaves the group to go after Chris, his bat shit crazy son who honestly should just be left to the zombies. However, it is his son, so I understand the need to go after him. I don’t, however, understand his unwillingness to believe that Chris is too far gone to be saved. Now Travis is taking him off on some random trek alone, because that is clearly the best solution. I forgot to mention that he left to find Chris without any shoes and absolutely destroyed his feet in the process. The Travis I know wouldn’t have been that dumb.

The next character that they are ruining just happens to be my favorite. Nick has consistently been the best character on the show, but the last couple of episodes he has been absolutely ridiculous. He buys into Celia’s backwards ass idea that the zombies are still people and shouldn’t be killed. He jumps onto this bandwagon with almost no persuasion and it just wasn’t that believable for his character. He is supposedly a survivor, but he definitely isn’t acting like one. Look what happened to Celia. Maddie showed her what real survivors do when required. Now Nick is off to god knows where covered in zombie guts and all by himself. I’m sure he will find his way back to his family at some point, but I just don’t like this story-arch for him.

Along with Chris, Daniel has become certifiably insane, and they justify it with some random flashbacks to his childhood where it appears he was some sort of child soldier. I just don’t need this kind of backstory for a character like Daniel, especially when they just end up killing him at the end of the episode anyway. Well, I guess we don’t actually see him die, but all of the flames and his visions of his dead wife were pretty self explanatory. Poor Ofelia is an orphan now, but that isn’t necessarily a bad thing. Really all of the best characters are orphans, look at Harry Potter, or Annie.

My other problem with this episode, as well as the last, was the pacing. They just tried to fit too much into a short amount of time. They literally go from the boat, to the compound, and proceed to burn the compound to the ground in a matter of two episodes. It just felt too rushed for me to deeply care about what was going on.

I hope that Fear the Walking Dead gets itself back on track after it returns from its little hiatus because I still like the show and I want it to succeed. It can obviously never compare to The Walking Dead (or Game of Thrones for that matter), but it still has potential to be great television. AMC has some work to do, but there is still time to get Fear the Walking Dead in gear.