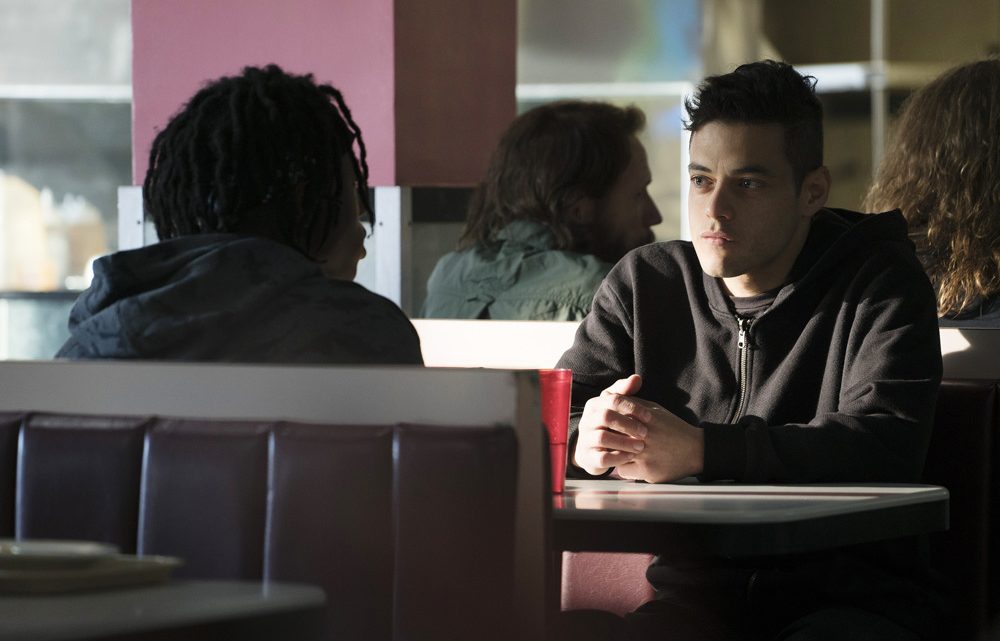 Mr. Robot is the most timely and relevant show currently airing. Its debut season developed a significant following and won critical acclaim, both of which were deserved aspects. I’m not going to delve into why or how since your interest in reading this article probably means you’re a fan of the show, hence my decision to jump right into the goods. We basically have two episodes jammed into one which is a welcomed situation given the time off between fresh material.

Season 2 begins with Elliot in seclusion after fsociety’s major hacking shakeup. He still talks to his father Mr. Robot, has reconvened with his therapist, and remains torn between saving the world or letting it burn. This hour-and-a-half episode doesn’t start off all that strongly with about 20 minutes of groundwork/catching up from Season 1’s ending. The show only picks up once Gideon meets with Elliot, threatening to expose the world class hacker’s true identity. This back and forth intensifies Elliot’s oncoming madness and loosens his already strenuous grip on sanity.

And within this component, the strongest factor of Mr. Robot has returned – the relationship between Elliot and his father. Christian Slater plays an aggressive and committed character who is considerably more outspoken than his son. Even with fsociety garnering international attention and internet security speeches from Barack Obama, Elliot stays unsatisfied. Darlene seems the same as the first current scene of her that hits the air features a messy cry. “We are in a war,” Darlene states, calculated and unmoving as ever, revealing how much more in touch with her senses she is than her brother. As comrades celebrate what occurred in Season 1, she plots the next move.

A subtext of Mr. Robot is the idea of how much society truly cares about meaningful issues. As corporations strengthen their grip on the masses within USA’s show, a group of vigilante hackers are attempting to even the score, yet the majority of citizens don’t seem up on all the intricate details. Some support corporate greed, others are passionate about fsociety’s anarchy, but which group knows why? This question lives near the heart of Mr. Robot – the fight goes on, but few understand the battle’s specifics.

I can’t be mad at Season 2’s decision to include multiple Seinfeld references (courtesy of Joey Badass), fantastic music, and limited commercial breaks. These details all contribute to the unique vibe that helped make Mr. Robot a surprising success last season. Phil Collins singing “Take Me Home” as an E Corp hot shot burns money and attempts to find the source of his company’s threat is a brilliant scene that stands as the episode’s most dramatic point.

A side note is that I binged Mr. Robot over a 24-hour period during Season 1. I pumped through each episode on back-to-back days (but nevertheless a 24-hour stretch, shameless, I know) so adjusting to watching one episode weekly will be a gigantic change. The binge has altered our television expectations and viewing techniques, although perhaps the methodical approach will allow me to take in the heightened details of Mr. Robot more efficiently.

That said, it feels somewhat like Elliot isn’t in the Season 2 debut enough. fsociety versus E Corp is the central war of the series, but naturally, the audience cares more about Elliot than his hacking group as a whole. That combines with this episode dealing with the political and economic ramifications of Season 1’s massive hack while Season 1 ended with, well, the massive hack. Point being – the aftermath of a major event is never equal to witnessing the actual event (in the TV universe).

A scene I could’ve done without was Tyrell’s wife being slapped during a rough sex scene… Without Tyrell. His whereabouts aren’t clarified during the Season 2 premiere, but it’s clear his wife isn’t exactly torn up. The scene does contribute to how freaking weird Mr. Robot can feel in given situations. Nothing’s weirded than when Craig Robinson (Ray) appears out of nowhere after Elliot’s friend tosses a basketball away from a pickup game! Okay, normally I’m super up on new castings for a beloved show, but I didn’t closely follow Mr. Robot‘s developments in this area. His attempts toward serious acting and profound moments don’t exactly hit, but his presence is a fascinating surprise that I’m down with.

Elliot attempts to “stick to the regimen” since that’s his primary way of having Slater’s character take over his psyche. While commendable in its effort, I doubt Elliot will be able to maintain self control for more than a couple of episodes.

Mr. Robot stretches its wings with maximum length when Elliot and fsociety are hacking – having Elliot refrain from hacking simply goes against the creative soul of the show. For now, however, the return of a tremendous hit and the promise of upcoming episodes is enough to meet my satisfaction. Mr. Robot is a rare television gem even with its intermittent Season 2 debut flaws, and I look forward to covering the whole sophomore run through Baller Mind Frame/Pop Culture Spin. Ride with me as we dive into Elliot’s mind…

Oh, you thought I’d forget? One of the closing moments of Mr. Robot is Gideon being shot in the neck while sitting at a bar. Poor Gideon. An easy to like character with a streak of bad luck. Then there’s Tyrell’s wife getting a missed call from an unknown number. Who is on that other line? And Elliot somehow appearing both mindless and focused at a church group before receiving a call from, you guessed it, Tyrell. Yes, I’m officially excited.