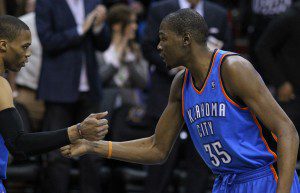 Russell Westbrook is taking time not just to figure out his next steps, but also to lick his own wounds. Reports have come out suggesting Westbrook’s style of play influenced Kevin Durant to leave, though Durant publicly denied that in Las Vegas recently. The two have not spoken since Durant’s decision. Those close to Westbrook say he’s both angry and hurt not only by Durant’s decision to leave but also because Durant didn’t even call to tell him personally. Westbrook wasn’t prepared to be in this position — three weeks ago, like everyone else, he thought Durant was coming back. And he had to learn the hard way he wasn’t. ESPN