William Sadler in The Hollow

William Sadler is a seasoned actor that you can always count on to give an organic, engaging performance. He’s been in over 150 productions, including Tales from the Crypt: Demon Knight, The Green Mile, Iron Man 3, and The Shawshank Redemption. Sadler has squared off against Bruce Willis, explored three of Stephen King’s cinematic worlds, and even filled in the robe of the Grim Reaper.

Sadler’s latest project is The Hollow, directed by Miles Doleac, which chronicles the murder of a U.S. Congressman’s daughter in a small Mississippi town. Mr. Sadler took some time to talk to The BMF’s very own, Pop Culture Spin, about his career in acting, and his upcoming film.

Pop Culture Spin: Let’s start with how you got into acting. How did it happen? Was there anyone in particular that inspired you to give it a shot?

William Sadler: I got into acting in high school. I was doing stand-up comedy; I played the banjo and told jokes. I was Banjo Bill Sadler and I did it all around Buffalo. It was going fine, and then one day I had an English teacher named Dan Larkin who came up to me and said, “Why don’t you try out for the senior play?” I tried out for the senior play and I got the lead. It was Harvey, and I loved it. Then he said, “Why don’t you try out for the community theater play that we’re doing?” And that was another amazing experience. It was a Pulitzer Prize-winning drama. This Pulitzer-Prize winning drama was just devastating. It was called The Subject Was Roses by Frank Gilroy. I auditioned for it and I got the lead in that and then I was hooked.

I just wanted to know everything there was to know about the craft of acting. I studied at SUNY Geneseo for four years, then got a Master of Fine Arts in Acting at Cornell. I got a scholarship to go to Cornell for two years. Then I came to New York and started doing theater. I finally settled in New York and did theater for 11 years, met my wife, lived in East Village and did nothing but theater until 86’. And then I did my first movie (Project X). That got me out into Los Angeles. I tried to move back to NY, but Los Angeles was calling.

PCS: You have given so many great performances in a variety of movies. Out of all the characters you’ve played, what are some of your personal favorites?

Sadler: Two that jump out at me are Heywood in Shawshank Redemption, he was fun to play, and The Grim Reaper in Bill and Ted’s Bogus Journey; maybe the most fun I’ve had in a movie. I got to be silly again. They didn’t just want me to kill people. The job was to be funny, and so I let myself go. 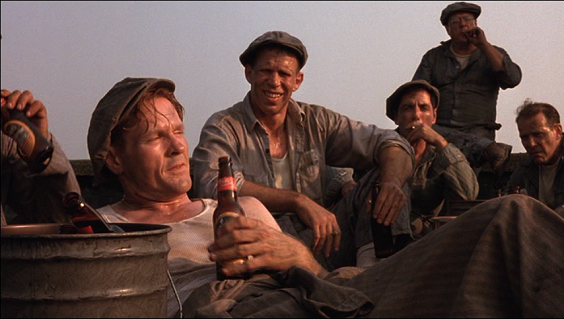 William Sadler in The Shawshank Redemption

PCS: The Hollow has a great cast, and you’ve worked with some amazing actors throughout your career. Who in particular have you enjoyed sharing the screen with?

Sadler: There’s been a lot of really wonderful folks that I’ve been fortunate enough to work with, but the kind of people that stand out are Morgan Freeman, James Whitmore, I loved working with Billy Zane in Demon Knight. In The Blacklist, I thought James Spader was phenomenal, and really fun to work with. It’s sort of like you’re a tennis player, you’re going to bat the ball back and forth, you’re going to volley with this other actor. James Spader is like playing with McEnroe. You have to bring your A game, and everybody rises to the occasion.

PCS: Tell us about The Hollow and the character that you play: Sheriff Beau McKinney.

Sadler: He’s a sheriff in this little, tiny Mississippi town. There’s a triple homicide at the beginning, and because one of the people who’s killed is the daughter of a U.S. Congressman, the FBI is all over it. Suddenly, this national spotlight is put on this quiet, little Mississippi town where nothing ever happens. The police department in this little town is corrupt as hell, everybody’s on the take, everybody’s selling drugs or looking the other way. There’s all sorts of things that you don’t want the spotlight on, except for my character, who is not on the take! He got by, kept his mouth shut, and now he’s just a year or so away from retirement and he wants to get the hell out of this place in one piece without going to prison.

It has a film noir feel, it’s very dark. The whole thing has this gritty Mississippi feel, which I thought Miles did beautifully. He captured the seedy underbelly of this small town, where everybody looks like one thing and nobody is that. It’s an interesting drama, and it’s largely character-driven by the two FBI agents who are having an affair. One of them is an alcoholic, wrestling with his addiction and this job. He’s trying to figure out what to do with his life to keep it from going down the toilet, while they’re trying to solve this case.

PCS: Have you worked with Director Miles Doleac previously?

Sadler: The Hollow is the second film I’ve done with Miles Doleac. I did a film before that called The Historian, which is a love triangle set in a university history department between the head of the department, a young professor, and a young graduate student. I had a terrific time with the role. He wrote it, directed it, and starred in it himself, opposite me. We had a great time working on it. It won some awards. Long Island Film Festival gave me Best Actor for it. I liked the relationship, and I liked his energy. I liked his ability to collaborate.

PCS: What attracted you to the script for The Hollow? How does an actor go about the process of choosing a role to pursue?

Sadler: Some of it is opportunistic. I had the existing relationship with Miles. I’ve always liked those noir, Raymond Chandler type of movies. There’s an appeal to that. I like that genre, and I don’t think I’ve ever done one. It reminded me a little bit of a movie I did with Dennis Hopper years ago called The Hot Spot, which was about a sleepy little Texas town where everybody is sleeping with everybody else. You scratch the surface, and underneath there’s kinks you can’t imagine. It (The Hollow) had a little bit of that feel. Hopper did a great job with that film. That was, I think my second movie or something. It was very, very early on and he was really great, he was a mentor in some ways. He helped me make the transition to film from stage. Great guy.

PCS: What’s Miles like as a director and how has he evolved from his first feature film?

Sadler: He’s a fast learner. The things I was critical of him in The Historian he fixed in the second movie. I’ve done it myself, I’ve directed and acted in the same piece; it’s really, really difficult to hold on to your character, turn it on, turn it off, so you can step back behind the camera and make decisions. When you’re directing something like that, everyone on the set has questions for you. Every single person on the set is bombarding you with questions. The business of running that ship is very different from stepping around in front of the camera and getting into character. It was really fun to watch him do that. I thought he did a fairly admirable job of wearing those two hats, especially since we shot the whole thing in about 20 days. It was an insanely ambitious schedule. I also like the fact that he appreciates suggestions. If I have a thought, I don’t feel like I have to bite my tongue. If I can see a different way of solving the problem I’m not afraid to suggest it to him.

PCS: You have quite a few upcoming projects. Is Bill and Ted 3 in the works and if so, will you be playing The Grim Reaper again?

Sadler: I keep hearing rumors about Bill and Ted 3 as well, and more than just rumors, there are a lot of people at work trying to make it happen. And yes, I would love to play the Reaper again. It was great fun to do, and I would do it again. I don’t know where exactly in the process they are at the moment. I keep hearing from various folks that it’s coming, and I keep saying, “well, let me know!” It really would be fun to see where Bill and Ted are, they’re not in San Dimas High School anymore, they’re like 60. It’d be great fun to see if they still play air guitar! And what’s Death doing these days? And what kind of games would they play now? Would it be Nintendo or Xbox? Super Mario? I’m showing my age!

PCS: Thank you again for taking the time to do this!

The Hollow comes out on October 7. Check out the trailer here: