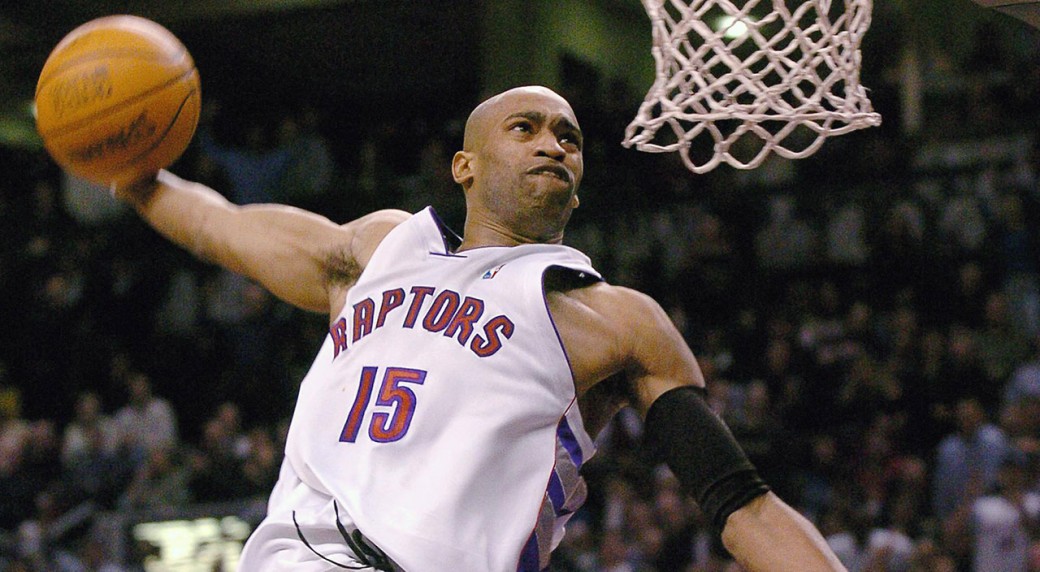 “I was fortunate to have the talent … you get spoiled when you’re able to do a lot of things. You see that you don’t have to work at it.”

I’m sure you won’t find this hard to believe, but those two sentences were not spoken by the same person. The first quote comes from a five-time NBA champion and one of the ten greatest basketball players to ever step on an NBA floor; a maniacally competitive dude who played through countless injuries, even ones he really didn’t have any business trying to play through. He lived and breathed the game of basketball.

The second quote comes from Vince Carter. It goes without saying, but Vince Carter is not Kobe Bryant.

Vince’s resume is more difficult to understand than any other players on this list. On one hand, if you look at the raw numbers it would be difficult to argue against the fact that Vince had an incredibly successful career. He’s played for nearly two decades and he was a quality starter for over half of them. He played in eight All-Star games, more than guys like Pau Gasol, Tracy McGrady, Kevin Durant and Tony Parker, all of whom will be appearing on this list in the near future. Only five players (Kobe, Dirk Nowitzki, LeBron James, Paul Pierce and Tim Duncan) scored more points between the years 2000 and 2016 than Vince Carter has.

And yet, Vince barely cracked the Top 25.

One could argue that I’m penalizing Vince for reasons that have nothing to do with being a great basketball player. I’d disagree, and I’d remind you to check out my criteria before moving forward. With that said, I’m going to go right down the line on the criteria and evaluate whether or not Vince gets a check mark in each category.

Vince was the alpha dog in Toronto and co-alpha dog in New Jersey alongside Jason Kidd, and neither the Raptors or the Nets made it past the 2nd Round while Vince was there. Is that wholly Vince Carter’s fault? Absolutely not, though it is probably an indication that he didn’t really move the needle as much as you ideally would want a “superstar” to.

The first defining crunch-time Vince Carter moment: Game 7 of the ’01 Eastern Conference Semi-Finals against Philadelphia when he missed the potential game and series winning jumper as time expired. For what it’s worth, this was a series that Toronto was plenty good enough to win; the difference in the series, in my opinion, was Allen Iverson wanted it way more than Vince did. If you go back and re-watch the games it’s something you don’t even need to pay close attention to to notice. Vince just wasn’t wired the same way A.I. was. Maybe that shot goes down if Vince hadn’t gone to his graduation ceremony at the University of North Carolina earlier in the day.

The second defining crunch-time Vince Carter moment: Game 2 of the ’10 Eastern Conference Finals against Boston when he missed two free throws with under one minute to go, which could have cut Boston’s lead to one. Boston, of course, went on to win the game and the series, shutting the door on Vince’s last chance to have an NBA Finals moment.

Vince has missed 10+ games in only four of his 17 seasons in the ’00’s. Even though he has a reputation of being a fragile bitch (more on this coming up) he has remained effective for quite some time. His eight-season peak is longer than most guys on this list, and even as he’s gotten older, he’s developed into a nice veteran role player off the bench.

We covered this already. But one thing that hasn’t been mentioned that should be mentioned, yet isn’t all that important in the grand scheme of things … Vince Carter saved the Slam Dunk Contest in 2000. If Vince didn’t bring the house down in Oakland in 2000, I’m not sure Zach LaVine and Aaron Gordon would have had the opportunity to do so in Toronto in 2016. This is probably Vince’s greatest contribution to basketball.

Vince had a ton of talent, but not enough to be able to coast through games without it being noticeable or damaging. Here’s the best way to look at it; Vince’s cousin Tracy McGrady had a tendency to lay off the gas pedal a little too much just like Vince did, but T-Mac was much more naturally skilled and physically talented than Vince was, so it didn’t look as bad as when Vince was checked out. It’s either that, or T-Mac was just far more likable than Vince was so we didn’t care as much when he did it. 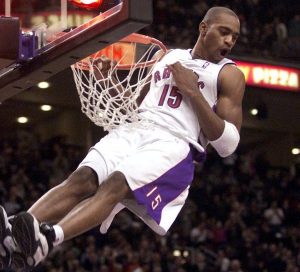 Power at his Peak

Here’s where the All-NBA teams, a much different measuring stick than the All-Star Game appearances, come into play. Vince only made two All-NBA teams, which means for only a two-year window (his second and third seasons) he was considered one of the fifteen best players, or one of the five or six best wings, in the NBA. From 2001 on he wasn’t better than or thought more highly of than Kobe, T-Mac or Paul Pierce. For Vince, the body of work is greater than what he was, and what he was able to accomplish, while at his peak.

Eh, it’s not great. It’s been improved over the last five years as Vince has become an impactful role player and a good locker room guy, but still, the bad taste he left in everyone’s mouth in Toronto as he was on his way out will probably never go away. He milked injuries, mailed in entire games, didn’t care about playing defense, didn’t ever really seem to fully give a shit and then admitted that he stopped trying near the end of his days as a Raptor (there were even accusations that while he was still a member of the Raptors he tipped off Seattle SuperSonics players of the plays the Raptors were running).

Even when things were great we were always left wanting more from Vince. He put plenty of guys on posters but he didn’t drive to the basket and finish through contact when it mattered. He was an effective scorer from the perimeter (Vince is sixth all-time in three-pointers made) but settled for jumpers in the biggest moments in games. There was always much more sizzle than there was steak.

How does he stand out?

Vince will be remembered for quitting on the Raptors, never fully getting there with the Nets, putting on one of the greatest All-Star Saturday Night shows ever and jumping over Frederic Weis during the 2000 Summer Olympics. The Dunk of Death (or Le Dunk de la Mort in French) is actually a great microcosm for Vince’s entire career.

On the surface, Le Dunk de la Mort will forever remain one of the marquee moments in the history of USA Men’s Olympic Basketball. In reality, the 2000 Olympic Team was the first that showed any sort of vulnerability in international competition that featured pro players. Just four years later Team USA barely grabbed the Bronze Medal at the ’04 Summer Games in Athens. The 2000 USA Basketball Team won the Gold Medal, but Vince’s dunk was fool’s gold.

On the surface, it always looked better than it really was. People will look at Vince’s resume, the body of work, and they’ll look at the highlights of the ’00 Dunk Contest and his posterizations of Weis, Alonzo Mourning, and handfuls of others, and the shootout with Iverson in the ’01 Playoffs, and they’ll remember him fondly. If you dig deeper, you’ll find that there was far too much behind the scenes bullshit and way too many anecdotes about Vince not caring like a superstar should. It was all fool’s gold.