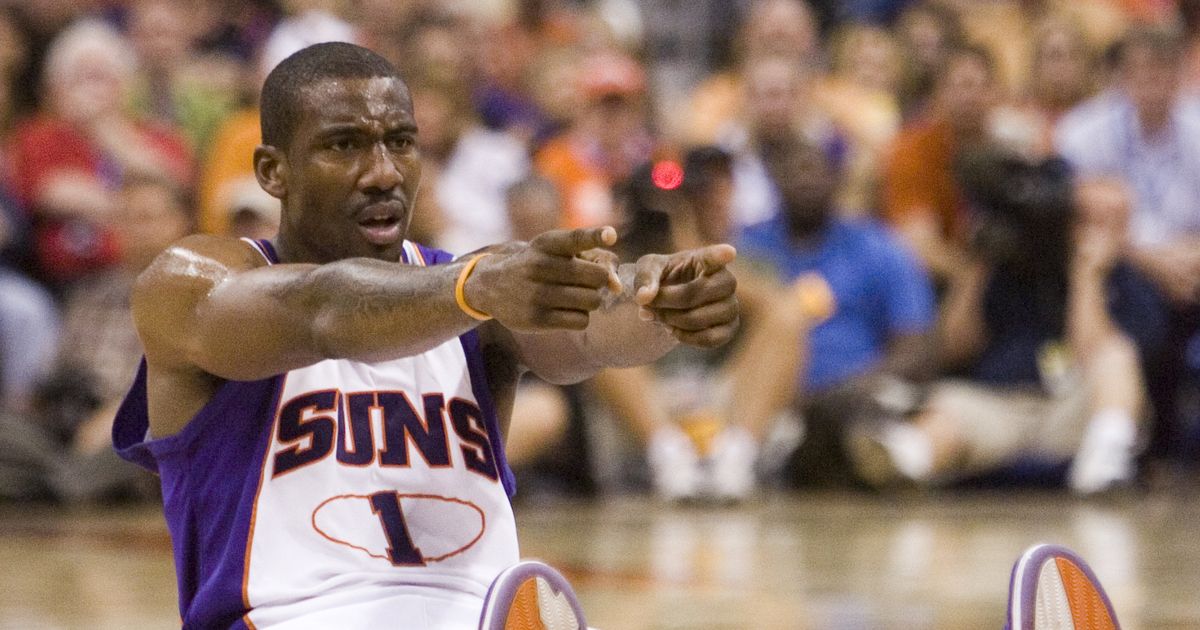 If I were to tell you the story of Amar’e Stoudemire‘s career, it would sound awfully familiar … Stoudemire had all the talent in the world, the skills to be a Top 10 player on this list, but his career was undercut because of injuries or other factors that were practically out of his control. It’s a story that applies to an unfortunately high number of other players on this list. Rather than expanding on this sad story for the next thousand or so words, I’d rather tell you a different story. A story that is slightly more uplifting. I want to tell you a story about one specific basketball game.

You’re probably thinking, “Wait a second Sonny, I thought this countdown was looking at a massive sample size. What are you doing focusing on just one game!?” Ultimately, Amar’e’s placement on the list wasn’t solely decided by one performance. Here’s the thing you need to remember about this lengthy process I’ve dealt with for the last five years; sometimes you come across a minor detail that sticks out in a major way and you just have to run with it because you’re convinced it’s interesting, or at the very least, it gives you the opportunity to write something that doesn’t sound the same as every other individual player write-up you’ve written does.

More precisely, the next thing I did was watch Game 5 of the 2005 Western Conference Finals; a contest between the San Antonio Spurs and Phoenix Suns. Now you need to remember, I’ve watched A LOT of basketball over the course of my twenty-four-and-a-half years on Earth, and over the last nine months or so I’ve been on overload. Throughout my life there are a few handfuls of games that are truly memorable for personal reasons (every noteworthy LeBron James game), plus there are games that are memorable for reasons that have everything to do with the quality/stakes of the game (The Derek Fisher Game in 2004, Game 7 of the 2005 NBA Finals, Game 7 of the 2010 NBA Finals, essentially every game in the Celtics/Bulls 1st Round series in 2011, the Clippers insane comeback against the Grizzlies in the 1st Round in 2012, Warriors/Thunder Game 6 and 7 in 2016, etc.), or games that stand out for individual performances (Kobe’s 81-point game, Kobe’s 60-point performance in his finale, Kevin Love‘s 31-31 game, Stephen Curry‘s entire 2016 season, LeBron staving off elimination against the Celtics in Game 6 of the 2012 Eastern Conference Finals, Russell Westbrook‘s broken face evisceration of the 76ers, etc.).

Here’s the moral of the story: I couldn’t even venture a guess as to how many basketball games I’ve watched in the last fifteen years, and an inordinate number of games are etched in my mind for a variety of reasons. When I came across that Spurs/Suns game, I had no recollection of watching it. None. I don’t know how I missed it. Sure, I was only 13 years old and it was on a school night, but I’m almost certain I wouldn’t have missed that game. I’m pretty sure I wouldn’t have fallen asleep before it ended. Regardless, it baffles me that I have no memory of it, mainly because Amar’e Stoudemire’s performance in that game was arguably the best one I saw over the last nine months of research.

The basketball world already knew who Amar’e Stoudemire, age-21, was by the time the 2005 postseason rolled around, but this was his coming out party. Stoudemire barely knew how to play basketball at this point — the addition of Steve Nash before the 2004-05 season certainly helped his progression — but Amar’e was still raw. His mid-range J would become slightly more consistent and he would eventually look a little more fluid and comfortable around the basket. All that is just fluff though when you consider Amar’e was a one-of-a-kind physical specimen and presence when he was in his prime, and yes, this was the peak of Amar’e’s prime.

On a slight aside, it’s a sad to think that at the tender age of 21 years old, Amar’e Stoudemire was more prolific than he ever would be again on a basketball floor. Even if he regained 90 percent of his athleticism after microfracture knee surgery in the fall of 2005, that missing 10 percent meant a lot. Post-knee surgery Amar’e was still an athletic force and a MVP caliber basketball player for the next half a decade that followed, but that missing 10 percent was evident if you really remembered what he looked like as a 21-year-old in his true prime. 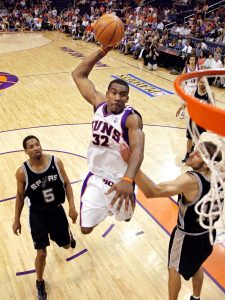 It’s easier to describe prime Amar’e Stoudemire by comparing him to catastrophic weather events than by using typical basketball jargon. Powerful and frightening, yet swift and magnificent. He was a tidal wave coming down the lane … a crack of thunder each time he threw down a dunk … a bolt of lightning gliding up and down the floor … a tornado going to work in the post. He was utterly destructive if you stood in his path, majestic to watch if you were looking on from a distance.

Never was Amar’e more devastating than during the ’05 Playoffs, and in particular, the final game of Phoenix’s postseason run. Going head-to-head against a two-time MVP and the best interior defender of the 21st Century (no, not Nazr Mohammed), Amar’e gave the Spurs everything they could handle; he averaged 37 points and 10 boards per game throughout the series and capped it off with a 42-point, 16-rebound gem in Game 5.

It’s cliche, but the numbers really don’t do Amar’e justice in this particular instance. With Phoenix on the verge of elimination in Game 5, Amar’e was the only Sun with any sort of sense of urgency. He was the only guy who wanted any part of the ball. In the 4th quarter alone Amar’e was 8-for-14 from the field, attacking Tim Duncan each and every possession, while the rest of the Suns’ combined to shoot 3-for-8 overall. Let’s rewind … saying that Amar’e was attacking Tim Duncan is an understatement.

Stoudemire took Duncan to the woodshed more than once in Game 5. He dragged TD out of the paint, rained mid-range jumpers over him and blew by him with surprising ease. He grabbed multiple offensive rebounds and finished over and through Duncan at the rim. He clearly outplayed the best big man in the world, and it was like he actively sought TD out and looked at every opportunity to score on him like it could be a launching off point for a monumental career. And it should have been. Despite losing the game, this should have been the launching point of one of the career of one of the greatest power forwards to ever play in the NBA. The cookie didn’t crumble that way. Now that Amar’e has retired from the NBA and decided to take his talents to Israel, his Hall of Fame worthiness is up for debate. For multiple reasons this seems silly to me.

First of all, Amar’e had a six season stretch where he was one of the fifteen best players in the NBA. Five of those came after he had knee surgery. It’s indisputable that Steve Nash had a positive impact on the career of Amar’e; unless he found his way to New Orleans in 2005 and played the next five years with Chris Paul, we never would have known the extent of the sort of damage Amar’e could do as the roll-man in a pick-and-roll heavy offense. But even after Amar’e left Phoenix in 2010, his one truly memorable season in New York proved that Amar’e could handle a heavy burden on his own. His knees couldn’t hold up long-term and his on-court relationship with newly acquired All-Star Carmelo Anthony was never ideal, but for four months Amar’e Stoudemire, New York Knick, was the funnest story in the NBA.

Second, I have to go back to that Game 5. Watching it now, eleven years later and knowing everything that happened over the course of the next decade (the messy Suns break-up, the transcendent half of a season in New York, the sad stops in Dallas and Miami), it’s still bewildering that Amar’e didn’t have a prolonged rule over the league. He was that damn good. And I have to imagine that if I did watch it at the time, 13-year-old Sonny would have been thinking the same thing.