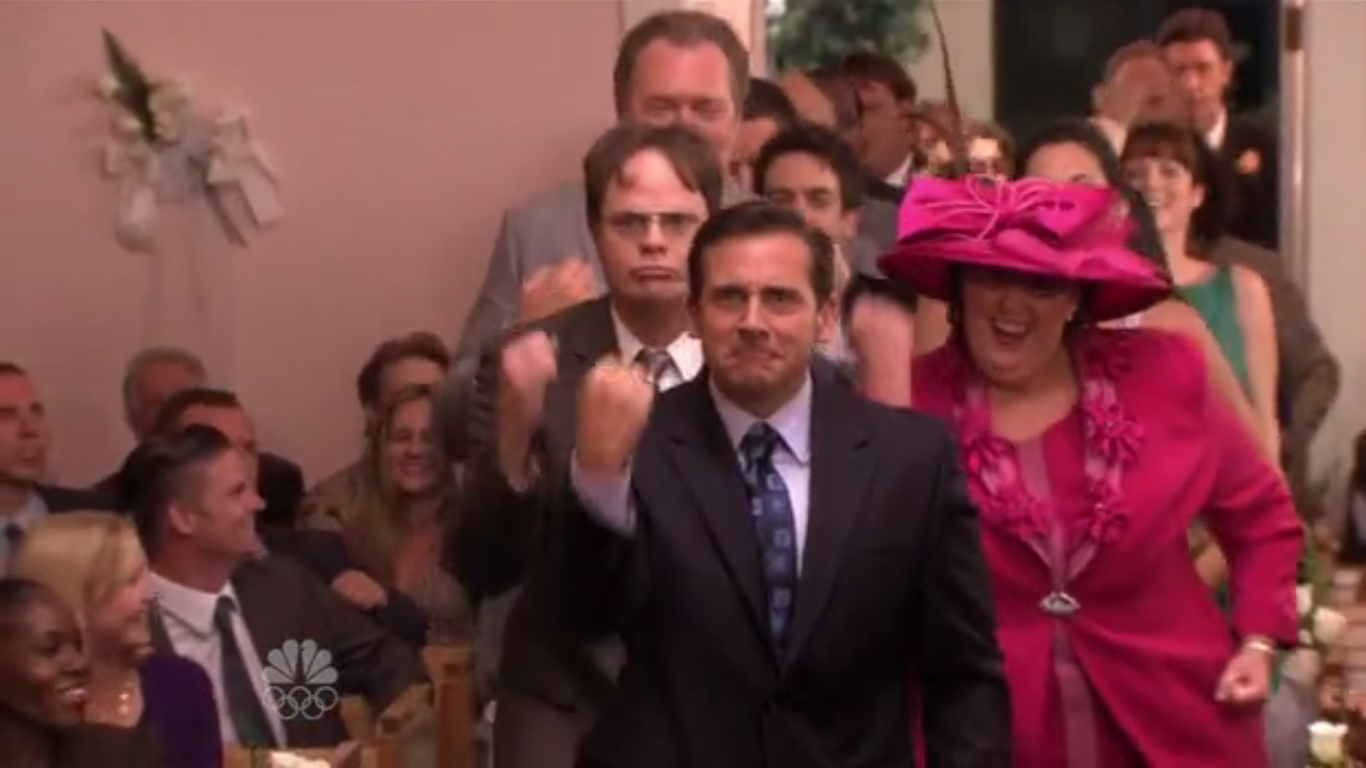 Jim and Pam are undeniably the best part of The Office, as well as life itself. Their love story, a culmination of years of flirting and missed opportunity, makes them the perfect couple. It’s literally impossible to watch the episode where they get married and not weep like a tiny baby. So we (Sonny, Jeanie, and Dalton) took it upon ourselves to watch the scene way too many times in a row in the name of science. We wanted to determine which of the people that danced down the aisle to Forever stole the show away from the bride and groom. We decided to have a mock fantasy draft in which we would each draft four dancers (which meant, despite some argument, Jim and Pam were excluded) and make our case as to why our team was the best. The draft went as follows:

With all due respect to my good friend Jeanie and regular friend Dalton, I don’t think there should be any dispute as to who has drafted the best squad of performers in this scene; and remember, that’s what we’re judging this on. As much as Jeanie wanted it to be, this isn’t Dancing With The Office Stars. It’s a determining who won this tremendously memorable and emotional and funny scene. The biggest winner, aside from non-dancing participants Jim and Pam, is Michael Scott, the Regional Manager at Dunder Mifflin’s Scranton branch. Nobody in the church, Jim and Pam included, was happier than Michael Scott was. It was indisputably his idea to do this in the first place and he thoroughly enjoyed every single second of it. Again, I won this contest when I drafted Michael 1st overall.

Amazingly, I was able to add incredible depth to my roster in the later rounds. With my second pick I grabbed seldom-used complementary character Creed Bratton. Creed got maybe two lines an episode but they counted each time. In basketball terms he’d be like a player who averaged ten minutes per game off the bench but is absolutely capable of lighting up the scoreboard when he’s out there. Per 36 minutes he’d be averaging something like 29 points per game. Creed’s inclusion in this scene is brief, but his crotch grab is iconic and vulgar.

With my last two picks I opted to go with Kevin Malone, wearing a ridiculous toupee on his head and two tissue boxes on his feet, making a fool of himself as he tried to keep up with co-worker Oscar Martinez, and Isabel, one of Pam’s bridesmaids. Even though Isabel wasn’t a regular cast member on The Office, I felt like she was the steal of the draft in Round 4. How can’t you be impressed by the fact that she took a violent kick right to the chops and didn’t even drop to a knee. She even continued dancing later on in the scene. Guys, Dwight Schrute is a purple belt. He kicked Isabel square in the mush and Isabel ate it like she was a long-lost sibling of UFC’s Diaz brothers.

With my first pick I took none other than Dwight K. Schrute. Everything the man touches turns to gold. He is arguably the best salesman in the office, he runs a successful beet farm/bed & breakfast AND he has those moves like Jagger. Not only does he get the music started for this scene, which is the most important job in the wedding, but he also has the choreography skills of a dancing God. I mean look at him and Isabel. Dwight clearly came up with their dance and executed it flawlessly. Isabel obviously screwed up and was in the wrong place, which led to her taking a Schrute kick to the face. Let’s talk about that kick too. Like you said, Sonny, Dwight is a purple belt and it shows. He made Leonidas proud with that kick.

While Dwight was a clear choice for my first pick, I took a true underdog with my next one. Andy Bernard went down the aisle using a walker, and still managed to make it look good. Not only can the man dance, but he also made it down the aisle with A TORN SCROTUM. That’s some serious effort right there, and in my book, effort counts just as much as anything else. He proves that he’ll endure just about anything to show off his dancing skills. If this were indeed the NBA, my boy Andy would win “Comeback Player of the Year.” Also, did you know he graduated from Cornell?

My third pick is my true ace in the hole, my trump card, if you will (ew, not that Trump). Jim’s brother Pete is the MVP of this scene. The man throws out a flawless Michael Jackson dance combination. It may be quick, but it has it where it counts (AND THAT IS WHAT’S IMPORTANT). If you use Michael Jackson in a dance competition, you win the competition; it is as easy as that.

My final pick was the great Bob Vance: Vance Refrigeration. Keep in mind that Bob Vance is generally pretty reserved. Sure, privately he and Phyllis basically re-write the Kama Sutra, but he isn’t a flashy guy. Based on his very inappropriate ass-slapping of Phyllis down the aisle, I’m led to assume he slammed half a bottle of whiskey right before he came out. Anyone who has the balls to down a bunch of whiskey before they dance down the aisle at his wife’s coworker’s wedding is a winner to me.

This may not be a dance competition but it is about the dancing. And nobody is taking this dance as seriously as these four people (except maybe Michael, but his dance moves are subpar in comparison). I got my top four picks, which is awesome because – having never done a fantasy draft before – I was super nervous the entire time.

I knew Erin was a good choice because as soon as I picked her Dalton called me an asshole. Stealing Erin away from Dalton would have been reason enough to pick her, but the actual reason I picked her was twofold: 1. She dances the same way I dance around the house (just ask Dalton) and 2. She’s taking this dance so seriously that she gives zero fucks about the fact that everyone gets a glimpse of her ass. That’s dedication to your craft.

Stanley was an obvious second pick because, despite usually hating all things including fun, Stanley is super into this. Look at his smile. Stanley is having the time of his life, and it shows in his dancing. He’s giving it his all and, remember, he has a heart condition. His dance moves are a little reminiscent of Phyllis’, who we’ll get to in a bit, but he still kills it. I wouldn’t be surprised to learn he pre-gamed with Bob Vance: Vance Refrigeration.

Oscar, like Stanley, is usually too cool to partake in the rest of the office’s antics. Except for when dancing is involved. Man loves to dance. I can just see Oscar practicing his dance in a mirror at home until he got it perfect, and then going to work and teaching Kevin in the abandoned Café Disco. And you just know that he gave Kevin a very stern talking to after he butchered his beautiful choreography.

Last but not least is Phyllis. She says one episode that she won Bob over by waiting for him in his office wearing nothing but kitty cat ears. I don’t know sports but I do know that back in her day Phyllis would definitely have celebrated a dunk (she played basketball, not football) with some experimental twerking. Her horsey dance is not only innovative but also way raunchier than Creed’s crotch grab, which was too on the nose to truly be shocking.