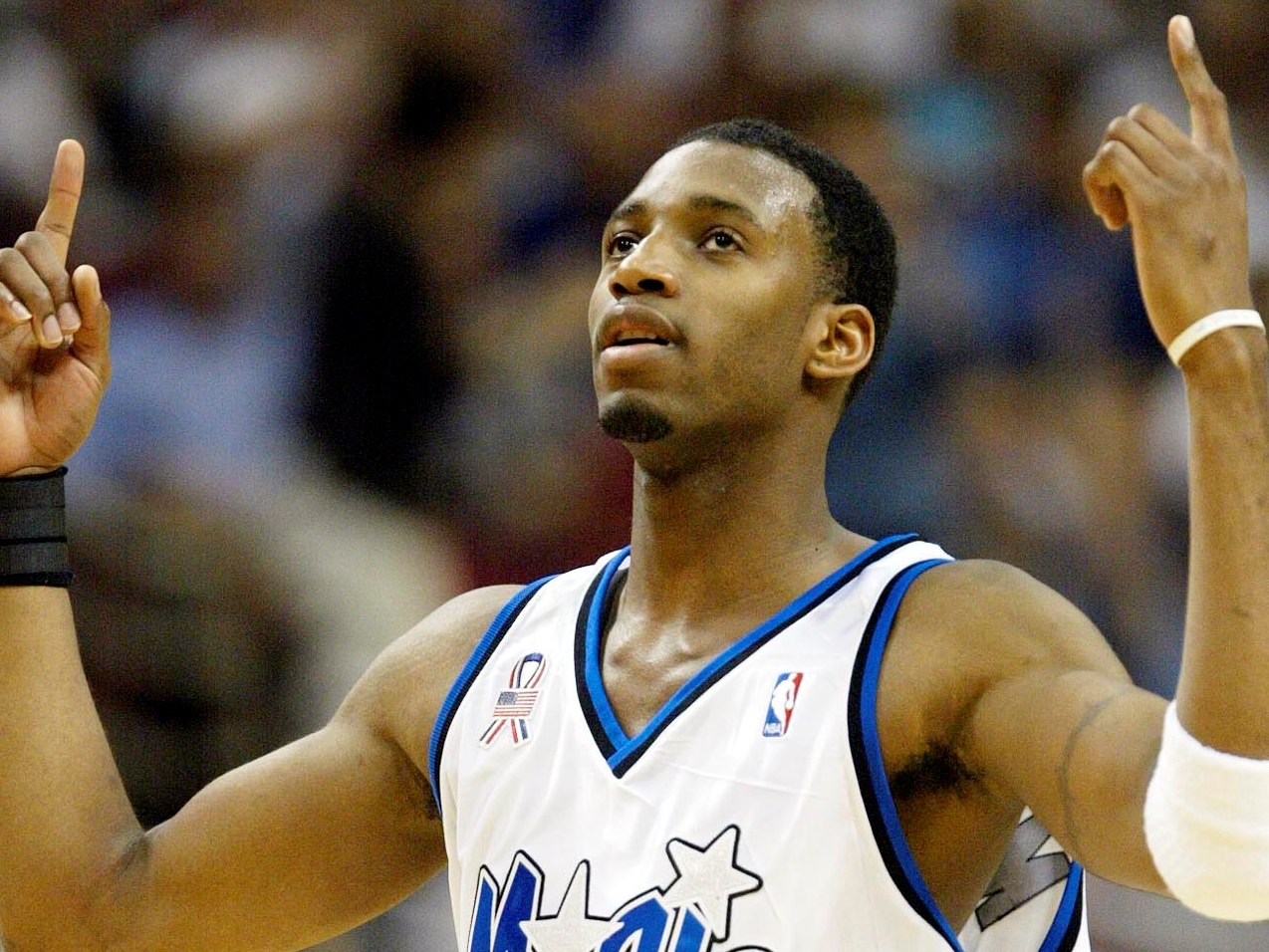 Once upon a time I was a Tracy McGrady fan. That’s not to say I dislike Tracy McGrady now. As you will soon find out, I have nothing but appreciation for T-Mac and everything he did in the NBA. I’m still a fan. I don’t know if my ranking of McGrady will be a reflection of it or not, but I think fans have probably underrated McGrady for a variety of reasons that can probably be boiled down to two main criticisms (first, he reached his peak earlier than most guys do, and flamed out younger and more quickly than a lot of the guys ahead of him on this list did, and second, he didn’t make it out of the 1st Round of the Playoffs until he was floundering at the end of San Antonio’s bench in the 2013 Playoffs). Back to the main point, perhaps a better way to word the opening sentence would have been, Once upon a time, Tracy McGrady was my favorite NBA player.

It’s awfully easy to understand why nine-year-old me would have been drawn to Tracy McGrady. The rationale behind a nine-year-old’s decision of who they choose to pick for their favorite team or player is pretty simplistic; if they aren’t following the lead of a parent, they’re usually picking based on a combination of who is fun to watch and who is successful (sometimes those two things go hand-in-hand). McGrady didn’t have a boat load of success in Toronto, but once his Orlando tenure began there were few players, if any, that were more entertaining on a basketball floor than Tracy McGrady.

The things I enjoyed and really paid attention to as a nine-year-old basketball fan are different than what I look out for when watching I’m watching basketball now, fifteen years later. The fact that T-Mac was a brilliant scorer, a one-of-a-kind athlete and a truly violent in-game dunker was really all it took to catch my eye back then (some of the other vital skills McGrady possessed that made him so great went largely unnoticed back then). All that mattered was that T-Mac was a threat to go for forty every single night and absolutely nobody was safe if McGrady was gliding toward the rack.

Those two anecdotes will forever make up a major portion of T-Mac’s legacy, and that’s fine so long as more is eventually considered too. McGrady should be remembered as a breathtaking scorer and fearless finisher at the rim, and for as great as he was in each of those categories, at various times throughout my research process I felt like I had actually managed to forget about just how great he was. And I knew if I had underrated McGrady in the two areas where he’s most fondly remembered, I was probably missing out on a lot more than I rightfully should. So rather than move forward in traditional fashion column fashion, I want to bring attention to some of the points I felt were most important and noteworthy.

The mid-season 22 game winning streak the 2007-08 Houston Rockets ripped off remains one of the most puzzling regular season occurrences of the 21st century. It’s the fourth longest regular season winning streak in NBA history. I understand why it happened; 15 of those 22 games were played in Houston, and only 10 of 22 games were against Playoff teams. But I still don’t totally get it. The Shaq/Kobe Lakers never had a 22 game winning streak (their longest was 19 games). The Duncan era Spurs didn’t either (19 games). Neither did the Seven Seconds or Less Phoenix Suns (16 games), the Nowitzki era Mavericks (16 games), the Big Three Celtics (19 games). Even if you look prior to the year 2000, MJ’s Bulls (18 games), Magic’s Lakers (16 games) and Bird’s Celtics (18 games) never won 22 straight.

And yet, a team led by post-peak Tracy McGrady, Yao Ming (who missed the final ten wins in that streak), Shane Battier (also involved in Miami’s 27-game win streak in 2013), and Rafer Alston (formerly Skip To My Lou from the And 1 Mixtape Tour) didn’t lose a game during a stretch of time that extends from before the Super Bowl to after the NCAA Tournament begins. I don’t understand.

Just four seasons earlier, McGrady was the best player on a team that lost 19 consecutive games after winning their first game of the season. Again, I understand why it happened; 14 of those 19 games were played against Playoff teams and, well, just look at that Magic roster. It’s a dumpster fire! But still, your credibility has to take a hit if your team loses 19 consecutive games. Whether it’s fair or not, that’s just the way it goes. If you’re a truly great player you find ways to elevate your teammates (no matter how uninspiring they are) and yourself (T-Mac averaged only 24 points per game during the losing streak … the rest of the season he was at 29 points per game).

In fairness, we need to remember that once T-Mac reached his prime his best teammates were the semi-frequently injured Yao Ming, the always injured Grant Hill, Mike Miller, post-prime Dikembe Mutombo, Luis Scola, Rafer Alston, Shane Battier, Drew Gooden and Juwan Howard. I ain’t shittin’ ya, that’s the list. Of course, this could have been avoided if McGrady didn’t decide to leave Toronto during the summer of 2000. He could have spent the next few years playing alongside his cousin Vince Carter and a bunch of hungry vets like Charles Oakley, Mark Jackson, Dell Curry and Antonio Davis, and they probably would have been Eastern Conference championships.

Tracy McGrady was a great passer

There’s an asterisk next to this one; McGrady had a tendency to play with tunnel-vision from time to time, go one-on-three, jack up shots over multiple defenders and overtly ignore his teammates (you know, the same kind of stuff Kobe did for massive portions of his career). When you consider the players T-Mac was saddled with during his prime it makes a little more sense; McGrady attacking a double team had a better chance of getting a bucket than someone like Keith Bogans ever did.

With that said though, McGrady was a deceptively good passer, both cerebral and skilled. You know how LeBron makes passing so easy because he’s so big, so smart and has an understanding of how his actions can bend a defense, and how those actions can get guys open shots? McGrady had that to a degree. He drew so much attention that even some of his most uninspiring teammates could get open shots. You saw this a lot when McGrady was posting up … a second defender would fly toward McGrady, the rest of the defense would shift, and T-Mac would rifle one of those cross-court darts to an open shooter. It’s exactly how you’re supposed to do it, but the ease with which McGrady did it was what stood out. Shit, McGrady even found a way to pass to himself on a semi-consistent basis. 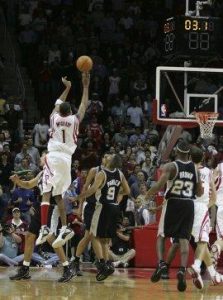 I hate using numbers, and numbers only, to drill a point home, but unless you really remember watching T-Mac in 02-03 or are inclined to do a YouTube deep dive of his 02-03 season, bashing you over the head with stats is the best way to illustrate how fricking good McGrady was as a 23-year old.

I bring this up because it raises an interesting question … if you Kobe and T-Mac had swapped places in 1997, what happens? By all accounts, T-Mac was the only perimeter in the early 00’s that was as talented and as blessed with jaw-dropping athleticism as Kobe was, and throughout my research I found this to be absolutely true. Would Kobe have left Toronto just as quickly as T-Mac did? Would there have been as much turmoil in Los Angeles now that Kobe was out of the picture? Would T-Mac have eventually left Los Angeles? Who would be remembered more fondly?

The answers to those four questions:

-Kobe absolutely would have left Toronto just as quickly as McGrady did. Shit, he tried to force his way out of Los Angeles. You really think he would’ve been cool playing in Canada for the duration of his career while Vince Carter mailed in one of every five games he played? I don’t think so.

-I say yes, T-Mac would have eventually left LA. After all, he left his cousin behind in Toronto, so why wouldn’t he take his talents elsewhere? This raises another interesting question … if T-Mac took Kobe’s place in 1997, would the Lakers have ever traded Shaq? My head is starting to hurt.

-I still say that Kobe would be remembered more fondly. Maybe I’m being clouded by the reality of the situation … a reality that includes Kobe winning three titles with Shaq and T-Mac never playing more than seven games in a postseason. Kobe was just an extraordinarily different breed of competitor, where T-Mac was, with all due respect, a very ordinary sort of competitor.

The ease with which McGrady did just about everything on a basketball court was so impressive and so technically sound … it just happened to be both a blessing and a curse. T-Mac played like he knew he had all of the physical tools it took to excel, and he used that as an excuse to coast. The only time you knew that you’d see his expression change was when he had just put someone on a poster.  It’s hard to say that a guy wasn’t wired like an alpha dog when he led the league in scoring twice and for seven straight seasons took at least 20 shots per game, but in retrospect it felt like that. He was selective in changing gears or showing any sort of fire. He wasn’t wired like Kobe or Westbrook or any other guy who you could imagine routinely saying to himself “I’m gonna absolutely murder these motherfuckers tonight!” before a game.

T-Mac was smooth and talented and marvelous to watch. He’s indisputably memorable and still, to this day, one of my favorite players. He should be a first ballot Hall of Famer and one of the first players any NBA fan remembers from the early 00’s. And in some weird way that doesn’t completely make sense, that means more than his Playoff successes, or lack thereof.