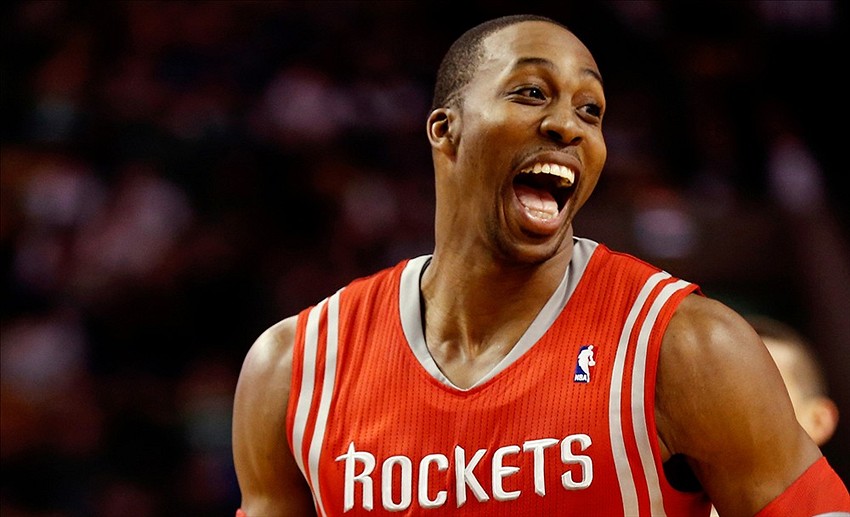 Those are Bill Simmons’ words, not mine. He wrote that in 2011 in his annual Trade Value column. I’m not sure if all of that holds up just five years later.

For reasons that aren’t solely Dwight Howard’s fault the overall perception of who he is as both a person and as a basketball player have changed in this last half of a decade, and as a result, you could make the case that this means Dwight Howard is no longer properly rated (and let me clear something up; it’s not all Dwight Howard’s fault, but he’s certainly given many fans plenty of reasons to consider him a bonafide dick-head). Today I’ll take it upon myself to sort through this mess and figure out whether or not Dwight Howard is still properly rated. Of course, that’s much easier said than done since it’s nothing more than a matter of opinion. However, I happen to know that my Dwight Howard opinions are both very informed and passionate, so maybe I’m qualified to discuss this subject.

It’s a complicated legacy to examine. On one hand, we can all agree that Dwight Howard was, for a five season stretch, one of the five best basketball players in the world. The group of players who can make that sort of claim is probably smaller than most people would realize. In that five season peak Dwight was the league’s premier rebounder and shot blocker. He was the league’s most devastating roll-man and finisher at the rim; a runaway freight train chiseled from stone barreling down the lane ready to pulverize any poor soul standing in between the rim and the human stone-chiseled freight train. It was a breath-taking sight to behold.

The incredible feats of athleticism, both offensively and defensively, are what have made Dwight bearable, and sometimes even fun to watch. No player in the top 20 was less fun to watch, and ultimately, that’s what has hurt Dwight more historically than anything else. Yes, I’m aware he’s still in the league and there is still time for his legacy to change over time, but this is a sad version of Dwight Howard … sure, he’s still jovial and he smiles a ton, but the decline of Dwight Howard, the athlete, is terribly sad.

It wouldn’t be a hot take to say that Dwight Howard, at any point in his career, wasn’t an aesthetically pleasing player to watch. Even when he still possessed freaky athleticism and was dabbling in wearing superhero capes in Slam Dunk contests, his big personality and highlight plays at the rim weren’t enough to get anyone pumped for the Orlando Magic to come through town. I know this first-hand. I’ve been fortunate enough to see a lot of great players in person, and if you’ve been to NBA games before, and really care about what’s happening out there, you know that seeing guys in person gives you a much different perspective than watching them on the television does.

I’ve seen LeBron James more times than I can remember off the top of my head. Every single time it’s felt like a life-changing experience. I got to see Kobe in his peak as a scorer, one of those years when he was playing with Smush Parker and Kwame Brown, and it was incredible. Last year I was lucky enough to see Stephen Curry in Miami, on a night when he scored 40 and hit a go-ahead three-pointer over the octopus arms of Hassan Whiteside. Additionally, I’ve had the chance to watch Dwyane Wade (at his peak in ’06), Dirk Nowitzki (post peak, but watching a lanky seven foot German dude drill triples in warm-ups with ridiculous ease is a sight to behold), Karl Malone and John Stockton (post peak), the ’13 Spurs (in Game 2 of the NBA Finals), and Chris Paul (hampered for the game with a hamstring injury, but he carried himself like a General and the officials he bitched at throughout the game were his subordinates) among many Hall of Fame caliber players. I’ve also seen Dwight Howard play in person. It sucked.

Keep in mind, I got a chance to see Dwight Howard during the 2010-11 season. This was the season when, more than any other time in his career, he put everything together in the regular season. With all due respect to Derrick Rose, Dwight should have won the MVP. If there was any time in his career that Dwight Howard should have been fun to watch, it was that season. He wasn’t fun.

The most remarkable thing about peak Dwight was his appearance. He really does look like he was chiseled from stone. I’ve never seen a human being look so perfect while standing still. He was immaculate. Once he started playing basketball he gradually appeared less impressive. He wasn’t fluid unless he was two feet away from the basket. It was a bummer.

I suspect that many basketball fans have had this realization over time. We wanted more from Dwight Howard. We wanted him to be funner to watch play, fun enough that we could smile as big watching him as he does when he’s playing. We wanted Dwight to develop a killer post-up game like Kevin McHale or a reliable mid-range jumper like KG. We wanted him to impose his will on teams like prime Shaq did when he was motivated. He didn’t do any of that.

We wanted Dwight to be something that he wasn’t, and when he didn’t become what he wanted him to be we were bothered by it, took offense to it and criticized him instead of appreciating him for what he was. I’m just as guilty of this as anyone else. I once wrote that Dwight was the Rich Man’s Dikembe Mutombo, and I said that as if it were an insult. Just because Dwight wasn’t the second coming of Hakeem Olajuwon it tainted my perception of who he was as a player. That’s wrong. He was a better post player in his prime than he gets credit for. It wasn’t pretty, but peak Dwight worked hard for position in the post, bullied defenders on the block, got to the spots he wanted and scored at a high rate. He knew where his bread was buttered.

More than anything else, Dwight just never had the kind of opportunity he should have had to thrive as an offensive weapon. Whether that’s his fault, or his teammates fault, or Stan Van Gundy’s fault, I’m not sure. I just know it’s unacceptable that Dwight never finished a season in the top 40 in field goal attempts per game. Even though his post game lacked polish there’s no excuse why he should have barely been getting ten shots per game (in that five season stretch where Dwight was the best big in the league, he got 12 shots per game). Peak Dwight was too quick and agile for bigger defenders and much too strong for smaller guys. The 66-win ’09 Cavaliers found this out the hard way. Dwight killed them so badly that a double-team was a must, and the Magic had the shooters on the perimeter to ride Dwight to the NBA Finals. 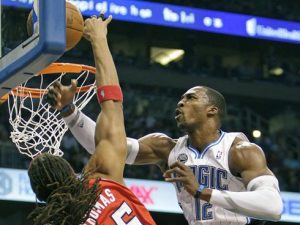 This could have just as easily been the case at any point from 2009 through 2012. If you surrounded Dwight with four shooters you could win 55 games and compete for a title. Dwight, LeBron and Chris Paul were the marquee turn chicken shit into chicken salad guys in the league in that span. If at any point during his peak the Magic were able to get their hands on an elite point guard it would have changed things in a big way. There just was never quite enough there for the Magic to get over the hump again.

And then Dwight hurt his back, and as I said before, things got sad. His post-up arsenal (or lack thereof) was more depressing than ever before because he couldn’t explode in the rim like he used to. There was no longer a guarantee that he’d make three plays a game that nobody else in the league could make. He wasn’t rotating as quickly defensively or holding his own hedging on screen’s like he did while he was in perfect health. Suddenly, Dwight was just another guy. Even though he was tremendously ordinary in so many ways when he was at his absolute best, Dwight Howard was never just another guy.

Dwight’s game may not have aged well, but I like to think that his legacy hopefully will. He’s taken quite a few hits the past few years (the end of his Orlando tenure, his miserable Lakers year, the ugly break-up with the Houston Rockets) and he’s been surpassed by young big men like Anthony Davis and Karl-Anthony Towns, guys who are doing all of those things we wanted young Dwight to eventually do. Here’s the thing though … if Davis or Towns end up with the same sort of resume that Dwight Howard did then they’ll be in good shape historically. For nearly a decade Dwight was the most reliable big guy in the game. He stayed healthy and was a guaranteed double-double. You knew you were getting otherworldly defense and enough relatively primitive offense that you had a chance in every single game. That’s pretty damn good.

With all of that said, I have no idea if this means Dwight Howard is overrated, underrated, or properly rated. I suppose it’s not all that important anyway. We’ll forever remember Dwight as the first best big man in a new era of basketball where it’s not necessary for bigs to own a treasure chest of post moves. Where you rate him among the guys who came before him is irrelevant. The game changed too much between Dwight’s peak and Shaq’s peak (not to mention all of the great big guys who came before Shaq). Equally irrelevant is where Dwight stands among guys who can space the floor and protect the rim effectively. As ordinary as Dwight may have seemed, he was one of a kind. As long as we can all recognize that, we’re doing well enough.