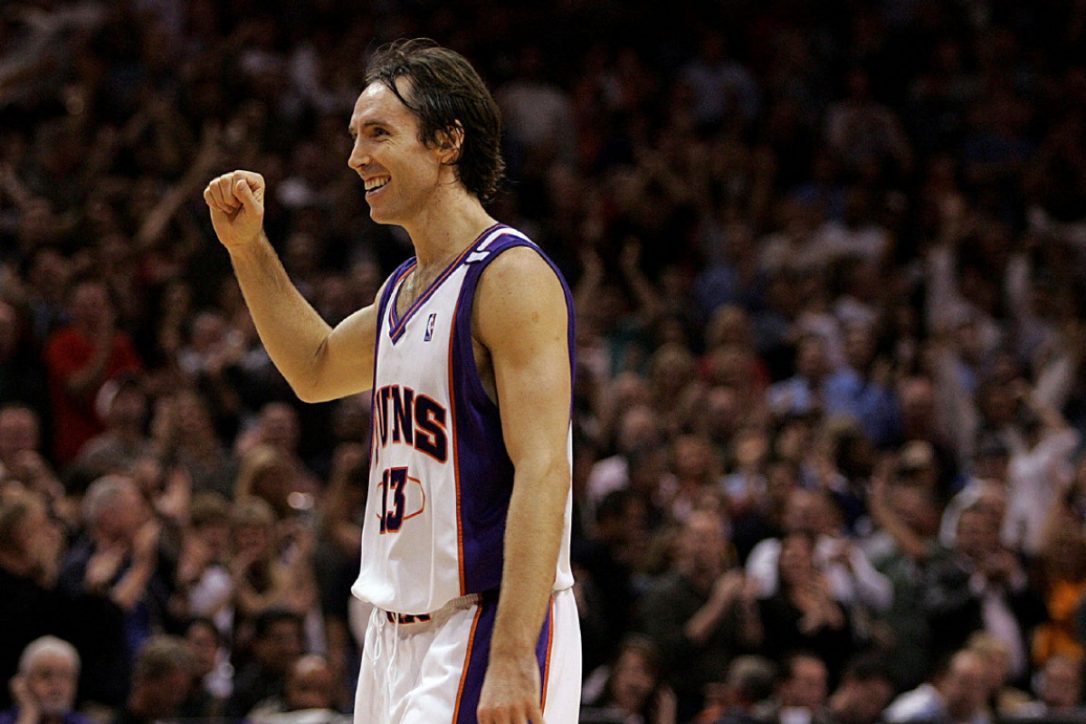 This is not my own personal belief, and of course, any rational person would know that a statement like that is embarrassingly irrational, not only because it would be a nearly impossible task to say that any one individual ruined (or improved) the sport of basketball simply because there have been so many contributions to the sport throughout it’s history, but also because a statement like that is largely untrue.

This is all besides the point that I’m trying to make. These “fans” that laud an era of basketball that exists alongside the Presidency of Bill Clinton and the relevancy of pop culture fads like Beanie Babies, Napster, ER, funny Adam Sandler movies, and going to Blockbuster to rent funny Adam Sandler movies would likely point the finger of blame at Steve Nash, because Nash, Mike D’Antoni, and the rest of the Seven Seconds or Less Phoenix Suns changed the landscape of the NBA.

That statement is not debatable. When Steve Nash signed with the Phoenix Suns 12 years ago, it represented a seismic shift in the way that basketball would be played and thought about over the course of the decade that followed. A league that had historically favored size over everything else was downsizing in favor of players who could do more than just be large. The plodding, grind-it-out, iso-heavy offenses that populated the league from the mid-1990’s through the mid-2000’s would eventually be shown the door as offenses that put a premium on floor spacing, passing, perimeter shooting and pace proved to be a much more effective means of putting the ball in the basket.

Now sure, this Pace and Space movement was bound to occur sooner or later. It was just the next logical step in the evolution of basketball. If all of the pieces didn’t come together in Phoenix then they more than likely would have come together somewhere else sometime within the next half-decade that followed, and they would be credited as the innovators of modern NBA offense, much like the Suns are. But here’s what I know for sure: no other team could have had the success that the Suns did … unless they lucked out and signed Steve Nash after the Dallas Mavericks let him walk in the Summer of 2004.

I’m sure it goes without saying, but I went back and watched A LOT of NBA games from 2000 through 2016 over the last year or so. I probably watched more of the Seven Seconds or Less Phoenix Suns than I did any other team. I didn’t consciously do this; it wasn’t a decision I made beforehand … it just happened. If you’re too young to remember them, or if you just need a fix of beautiful basketball, go ahead and fire up a YouTube search for any Suns game from 2004 through 2007. You’ll get drawn in. You’ll want to start watching them more and more.

I mention this because I came to realize and appreciate that this machine ran so smoothly because Steve Nash was undoubtedly the perfect point guard for it. That’s not to say Nash was a “perfect” player or that there weren’t warts to his game. He couldn’t defend anyone; the Suns routinely had to hide him on their opponents worst perimeter player on the floor, and more often than not that player would become the focal point of the offense once Nash got the assignment. On his best day he was nothing more than an underwhelmingly average defender, not even in the same category as a guy like Stephen Curry, let alone a defensive menace like Chris Paul.

Nash’s defensive foibles don’t disqualify him from the ranks of elite point guards. Had Nash ever played on an elite defensive team in his prime he could have been hid defensively, a fair trade off considering his presence essentially grandfathered any team he played on into the yearly discussion of the league’s elite offenses. That was the case in Dallas before he went to Phoenix, and it was the case in Phoenix after the Seven Seconds or Less team was disbanded. From 2002 through 2010 a Steve Nash led offense never finished lower than second in the league in Offensive Rating (points per 100 possessions). Even in Dallas, when the Mavericks were occasionally flirting with playing absurdly big (Dirk Nowitzki, Raef LaFrentz and Shawn Bradley were at times featured in the same starting line-up), Nash ran the show and shit worked out.

In Phoenix Nash was able to realize his basketball destiny. Paired with a innovative head coach and surrounded by a nearly perfect cast of co-stars and role players, Nash facilitated one of the most influential and efficient offenses in NBA history. Not only did the numbers back that up, the eye test did too. You were were tuning into something a little more than just basketball whenever you were watching Steve Nash play. Here are the three things that stood out watching him more than anything else:

Nash wasn’t overly flashy or even remotely arrogant, but you can’t say that he was just accidentally entertaining. There was certainly a degree of showmanship to Nash’s game. The way he’d run the break and dish no-looks. The way he collapse the defense and kick it out to shooters on the perimeter with a behind the back pass. The way he’d dribble circles around defenders until they inevitably broke down and gave up an easy look. The way he’d toss all kinds of crooked arm, borderline no-look shots up at the rim in traffic over bigger defenders. Nash was equal parts fundamental and flamboyant. Until Stephen Curry came along, there really wasn’t anyone slightly comparable to Steve Nash since Pete Maravich was in the league.

This goes beyond the rudimentary skill of passing a spherical inflated ball to another human being. Nash’s unselfishness not only benefited his teams, it permeated the franchises he played for. He brought out the best in each and every teammate he crossed paths with, and not just because he made it a habit of getting everyone easy buckets. Nash’s selflessness was contagious, infecting dudes to the point where they were making extra passes and playing basketball the way it should be played even if it wasn’t in their wiring before they had were in Nash’s presence. If you’re making a Mount Rushmore of Stars from the 2000’s that role players would have wanted to play with, the first three picks are Steve Nash, LeBron James and Tim Duncan, in some order. There’s no other way around it. Nash changed the culture in Phoenix. Very few guys ever have been talented enough AND transcendent enough as teammates to have that sort of impact on a franchise. 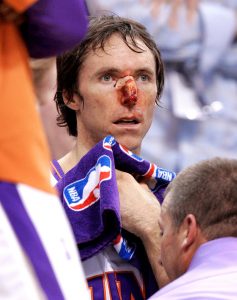 The portion of Nash’s game that will forever be underrated, mainly because of the way he looked (his slight build, floppy hair, skin color and occasionally busted up face made him look like a cross between a pro soccer player and the lead singer of an Indy Rock band) and the way played defense (again, not a lick of defense). People forget that Nash was totally fearless and a low-key bad ass on the floor. His contribution to the way offenses operate today will never be forgotten … but collectively we’ve forgotten about Nash colliding with Tony Parker and playing on while the bridge of his nose was gushing blood. We’ve forgotten about the time Earl Watson caught Nash with an elbow, and rather than laying on the floor in a heap of his own blood, Nash got up and bitched at the refs because they didn’t call Watson for a foul. Or how about in during the 2010 Playoffs when Derek Fisher broke Nash’s nose late in the game, and as Nash was walking to the free throw line he put his nose back into place.

The best example of Nash’s competitiveness: when he went back to Dallas during the 2005 Playoffs and imposed his will on his former team. The Mavericks let Nash walk because of his age (31), bad back and because they overlooked the direction the league was heading. Mark Cuban gave Erick Dampier a massive contract and the Mavericks missed out on the opportunity to do something similar to what the Suns did, with Nash running the show and Dirk putting up stupid numbers playing small-ball center. Nash later admitted it was personal in that ’05 series, but it was overtly obvious at the time. He put together a 39-9-12 performance in the deciding Game 6, in Dallas, with a particularly vengeful eff-you edge.

So back to the original point … Steve Nash didn’t ruin basketball. If anything, he improved the direction it was going. Nash was sublime stylistically and he was a legit gamer who played through pain and with a chip on his shoulder, and while we would have loved to see him shoot more, play better D or make a Finals (though, the Finals thing can’t be pinned solely on Nash … he was saddled with cheap management and caught horrible injury luck; Joe Johnson in 2005 and Amar’e Stoudemire in 2006), what he did bring to the table is more than most others have, and more than anyone could have expected from a four-year point guard from Santa Clara.