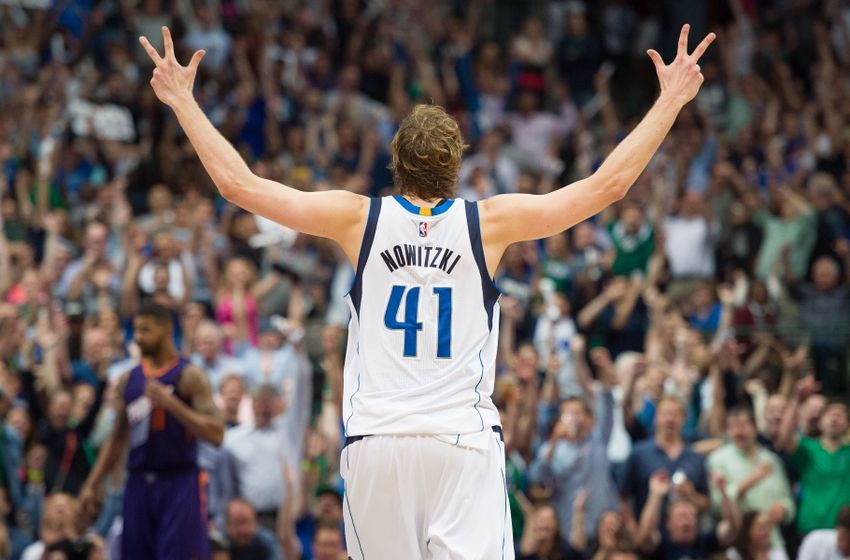 Earlier this year Kareem Abdul-Jabbar made headlines when he claimed that Dirk Nowitzki was a “one-trick pony” who hadn’t had a dominant career. I don’t want to make a joke about senility, so I’ll just assume that this was one of many instances where a notable player from the past feels inclined, for whatever reason, to cut down or criticize one current player or an entire new crop of players. I’ll never understand why grumpy old-timers are so compelled to minimize today’s players (my best guesses: they’re jealous of the big contracts, the endorsements and the overall notoriety … or they’re just senile), especially on issues when they are pretty clearly in the wrong.

Now sure, an assertion that Dirk Nowitzki is not dominant does depend greatly on one person’s definition of “dominance” compared to someone else’s. Was Dirk Nowitzki dominant? I think so, but was he as dominant as Shaquille O’Neal at his peak? No, definitely not! Was Dexter a great TV show? Of course, but was it as great as Breaking Bad? No way! You see where I’m going with this? Yes, It’s all a matter of opinion and definition, but sometimes it’s not worth fighting the battle when there is a clear and logical avenue to defend the opposition. In this case, no one was arguing Dirk’s dominance over anyone else’s. Jabbar simply took a question about Dirk’s trademark one-legged fall-away jumper and started taking jabs at his legacy.

By nearly any calculation, Dirk is roughly one of the twenty best basketball players to ever live; more talented, memorable, and yes, dominant than just about anyone that has been ballin’ in the last quarter-century. It’s almost impossible to dispute it. He certainly wasn’t a perfect player … you could poke holes in his defense (average at best, though he’s rarely caught out of position off the ball) and rebounding (uninspiring compared to other great bigs of his era like Duncan, KG and Shaq, but for his career he averaged only 1.5 fewer rebounds per 100 possessions than Mr. Jabbar, who knocked Dirk for not being a quality rebounder). But focusing on what Dirk hasn’t done well makes me feel like a former pro who peaked in 1993, and I don’t like that feeling. That’s an icky feeling.

Instead we should be celebrating Dirk as the most accomplished international basketball player ever (I’m not counting Hakeem Olajuwon, Tim Duncan or Steve Nash, even though they were born internationally, since they played college basketball in the United States). He’s far and away the best shooting big man to ever live, as he leads all seven-footers in three-pointers, free throws made and free throw percentage by a considerable margin. It should also be mentioned that Dirk’s jumper is a visual masterpiece. It’s the cinematography in The Revenant. It’s Julia Roberts in Pretty Woman. It’s utterly perfect. Watching Dirk in person, in his 16th season, shoot jumpers during warm-ups before a game and drill every single one remains one of the most captivating sequences I’ve ever experienced in an NBA arena.

Aside from being a sharp-shooter, young Dirk was also a sneaky good athlete. He spent a large portion of his time on the perimeter facing the basket, beating lumbering defenders off the dribble with a quicker first step than he was ever given credit for. Some of his savvier coaches even used him as a pick and roll ball-handler well before we saw big men used like that. In that way, Dirk was a player who was well before his time. He’d put bigger defenders in spots where they weren’t remotely comfortable defending and got himself some tasty mismatches with smaller players that he could abuse on the elbows. Today, young Dirk would be the ideal small-ball center. Amazingly, only twice in the last sixteen seasons has Dirk played more Center than Power Forward.

But what makes Dirk so special is not simply a picture-perfect shooting stroke and a jumper that he could bury over the contest of any elite defender in the league … it’s the tireless work he’s put in over time to stay in phenomenal shape and remain an impactful star well into his thirties. It’s the way he’s adapted over the last seventeen seasons; the aforementioned one-legged fall-away extended Dirk’s career the same way it did with my pick-up basketball career. At his peak Dirk could take a beating around the basket and keep coming; he was consistently around seven or eight free throws per game, always hit damn near 90 percent of them and never showed signs of cowering away from physical play.

As an older, aging vet Dirk stopped driving as much as he did when his legs were fresher. His game became more cerebral and he was a little more selective as a scorer. He developed an increasingly killer low post game, drilling turnaround after turnaround over anyone and getting fools to jump at shot fakes. He also still has enough zip and guile to drag bigger guys out on the perimeter, get them off-balance or in the air and find himself a desirable look at the basket. Rather than beating slower defenders down the floor on the break and getting lay-ups and dunks, an older Nowitzki started relying on a usually back-breaking trailing three that he’d cap off with the unorthodox thumb/index/middle finger three-point celebration. Must be a German thing.

My favorite portion of Nowitzki’s legacy: the incredible resiliency he’s shown time after time throughout his career. Think about all of the hits or near hits Dirk has taken over the last seventeen seasons:

In the ’04 offseason he lost a transcendent Point Guard (Nash) in free agency that would have made his life as a basketball player somewhere between ten and twenty percent easier moving forward … Dirk responded with a 26-10-3 campaign the following year and carried Dallas to 58 wins.

Dallas was on the verge of blowing a 3-1 series lead against San Antonio in the ’06 Playoffs … Dirk came through with a 37-15 performance in Game 7 on the road, which included a game-saving “And 1” late in the 4th quarter. In the next Round he destroyed Nash and the Suns to reach the NBA Finals.

Despite a 2-0 series lead, the Mavericks lost in the ’06 NBA Finals to the Miami Heat … Dirk responded the next season by leading a not-nearly-as-impressive-as-you-remember Mavericks team to 67 wins and winning the NBA MVP Award. Seriously, look at that Mavericks roster and think about whether they’d even secure home court advantage for one round in the Playoffs in 2016. I’m not so sure they would. 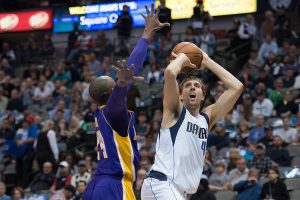 The Mavericks became the first 1-seed to lose a best of seven 1st Round series to an 8-seed in the ’07 Playoffs … Four years later, after everyone had written him off and claimed he was past his prime and couldn’t get the job done in big moments on the biggest stage, Nowitzki laid waste to who crossed his path on his way to an NBA Championship over the favored Miami Heat. It wasn’t a casual show of dominance either; On 54-73-94 shooting splits, Dirk and the Mavs swept the two-time defending NBA Champion Los Angeles Lakers. Dirk averaged 32 points per game (including a pantheon-worthy 48 point explosion in Game 1) against Oklahoma City in the Conference Finals. In the Finals against Miami Dirk made every clutch play imaginable and outgunned LeBron, Wade and Bosh in a truly surprising Finals upset.

How many other guys could have dealt with all of that on-court devastation and bounced back so spectacularly multiple years later? How many guys could have continued to be so brutally efficient in crunch time and consistently brilliant from season to season? How many guys could take those kind of hits and come back the following season and lead his team to yet another season of title contention? Are there a dozen other guys who have displayed that sort of fortitude? Dirk kept coming.

Excluding the occasional snarl or exaggerated fist pump, Nowitzki has remained a methodical basketball machine who has gone about his business at a higher level than nearly any seven-footer has so late in their career. In that way Dirk is actually comparable to Kareem, a similarly durable star who remained effective in the twilight of his career. Kareem lost a step over time and wasn’t nearly as dominant when he was 35 years old as he was when he was 25, but he was still getting crunch-time touches in the NBA Finals in his 19th season and you better believe he came through. Given the state of the league and the Dallas Mavericks in particular, it’s hard to imagine Dirk getting the chance to come through in a situation like this again, but wouldn’t you still trust the big German, heading into year 19, to deliver for the Mavs yet again in a big moment? I know I would, and if that doesn’t qualify Dirk as “dominant” then I don’t know what does.