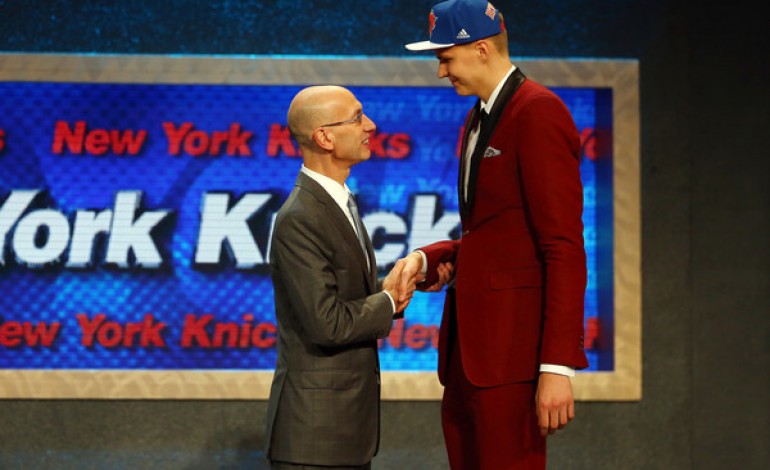 screen capture courtesy of the NBA/YouTube.

The saddest thing in life is wasted talent. That was the revelation Calogero had in A Bronx Tale and it could be the way we remember Kristaps Porzingis. The 7-foot-3 Latvian has restored hope to a hopeless fan base. He has proven that he is more than a put-back specialist. He has proven that he can be the centerpiece of something special. It’s no secret the team has developed little to no talent since 2000 and have more often than not been the laughingstock of the league in that time.

KP’s arrival seemed like a disaster at first, but ended up being the biggest moment for the franchise since the Carmelo Anthony trade. Coming into this season expectations for the retooled Knicks were high because of Porzingis. Since the season has tipped off those expectations have fallen because the Knicks are not utilizing him properly.

Through seven games the Knicks are 3-4. In all three of their wins Porzingis has scored at least 20 points. When Porzingis has not scored at least 20 points the Knicks are 0-3 getting blown out in each contest, losing by an average of 20 points. If you look at his numbers to start of the season in a vacuum they are even more impressive. Per 100 possessions Porzingis is averaging 29.7 points, 10.4 rebounds, 2.2 blocks while shooting 48.9-percent from the field, and 44.7-percent from three. His rebounds and blocks are down from his rookie season, but there is no denying the offensive improvement.

Unless a former Kentucky big man, Rudy Gobert, or Joel Embiid are on the floor Porzingis always has the mismatch. He’s too fast for the centers and too tall for the power forwards. He can put the ball on the floor, cut off the ball, or raise up from anywhere on the floor. His spike in three-point percentage—up 11-percent from his rookie year—has made him even more deadly with only a handful of guys possessing the ability to alter the shot. Knicks head coach Jeff Hornacek knows this and has already said they need to do a much better job getting Porzingis the ball.

“There were several times where he’s in the area on a smaller guy and we’re not necessarily looking for him,” Hornacek said following a blowout loss to the Rockets. “We’re looking for the next thing. We’ve got to find that mismatch, throw it up there, let him gather the ball and make a play on that.”

Prior to Hornacek saying that Derrick Rose had assisted on one–you read that right, one– Porzingis basket this season. Since that blowout loss to the Rockets where Porzingis had four shot attempts the Knicks have made a concerted effort to get their unicorn the ball early and often. It has resulted in three straight games with at least 20 points and a 2-1 record.

This is not to say Porzingis can do no wrong. He still has ways to go as a rim protector and still commits too many foolish fouls. But it’s clear Knicks have a major weapon on their roster that has not even scratched the surface of his potential and they have the right coach to get him to that potential. If Hornacek gets the freedom to run his own offense the rising star’s growth will happen much faster.

It has to drive Phil Jackson nuts is that his best player thrives when the team is not running the triangle. Porzingis certainly has the skill to play the triangle much like Usain Bolt has the skill to run longer racers. But when you have a sprinter you let him sprint. Same goes for basketball, Porzingis’ hoops destiny is a stretch five who becomes a nightmare on the pick-and-roll.

His game against the Bulls should be the blueprint for the rest of the season. If you noticed almost all of Porzingis’ points were off pick-and-pops, pick-and-rolls, and trailers. These looks don’t happen as often in the triangle where everyone has a set place to go. It’s perfectly fine for the Knicks to run elements of the triangle as it possess great principles despite the system itself being out of date. As for the standard offense the Knicks have to play faster, leaning on  pick-and-rolls especially when Porzingis is at the five.

Joakim Noah was paid a lot of money to be the center for the four years, but it’s obvious the team wasted $72 million. It’s nothing against Noah more so than a subtle push by Jackson to put more triangle pieces in the lineup. Porzingis is solid with Noah on the floor thanks to Noah’s passing acumen, but moving Melo to the four and Porzingis to the five is a more lethal lineup.

Hornacek flirted with this in the fourth quarter, moving Porzingis up to the five, Melo to the four and Lance Thomas playing the three. This made pick-and-rolls considerably harder to defend. Whether it was Rose and Porzingis or Melo and Porzingis there was mismatch on the switch or an open shot while the defender tried to get over the screen. Had the Knicks gone to that lineup while they were still winning their game maybe they win.

The good news for Knicks fans is that Hornacek knows what he has and knows how to use it. He’s said it in press conferences and most likely in the locker room–get Porzingis the ball. The bad news is Phil Jackson’s meddling may not keep Hornacek on the bench. If Rambis takes back over then fear the worst. But that’s to worry about another time. For now the Knicks should be excited about Porzingis and even more excited that they finally have a coach that knows how to use him. Let’s just hope everyone else realizes this and falls in line.