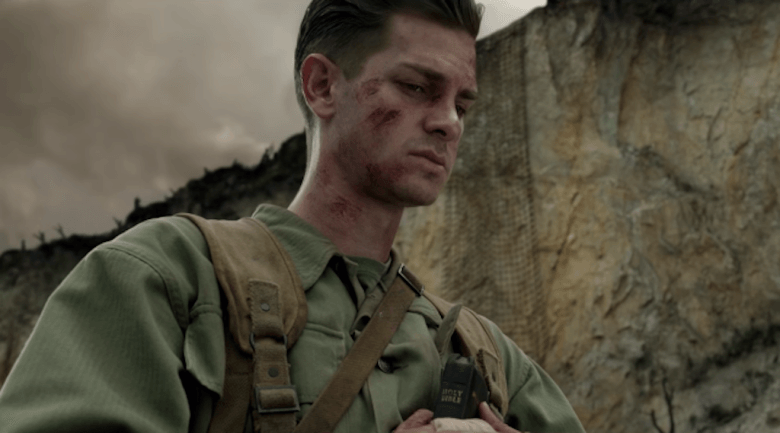 War can bring out the worst in people, but Hacksaw Ridge is a film mainly about war bringing out the best in one man. Mel Gibson returns to the director’s chair for the first time in a decade to bring us a film about WWII American Army Medic Desmond Doss, a man who received the Medal of Honor without firing a single shot. Gibson rounds up an intriguing cast, which includes Andrew Garfield, Hugo Weaving, Vince Vaughn, Sam Worthington, and Luke Bracey.

It’s been 10 years since Gibson’s last directorial effort, Apocalypto, and he hasn’t lost a step. Gibson balances a character piece, love story, and war film with great command of his craft.  The battle scenes in Hacksaw Ridge are among the best in war film history. They are raw, bloody pieces where you can almost feel the rats nibbling at the corpses covered in maggots, and smell the burnt skin. There are some parts that come off as repetitive or slow, especially with fighting for the right to not carry a gun into war as a conscientious objector; however, it’s necessary. Gibson knows how to build tension, and also knows when to pull back and admire a scene. He allows the characters to grow in relation to one another so that we are fully invested in where they are going to end up.

Andrew Garfield gives one of his best performances playing Desmond Doss, a religious man that joins the army for the sole purpose of saving lives, not taking them. Garfield plays the do-right man with conviction. If a lesser talent took on the part, and a mediocre director was behind the camera, Doss might have come off as cheesy. Garfield portrays the man well, becoming an undeniable inspiration through example. Footage of the real Desmond Doss comes up at the end of the film, and it’s evident that Garfield did his homework.

There are also some really solid supporting performances, most notably from Hugo Weaving and Vince Vaughn. Hugo Weaving plays Tom Doss, Desmond’s alcoholic father who is a deeply troubled war veteran. Tom is a shell of himself that turns to violence in dealing with his family, and Weaving portrays him as villainous, but never a villain. Vince Vaughn also does a terrific job as the wise-cracking Drill Sgt. Howell. Vaughn delivers some hilarious lines, but still manages to sustain dramatic weight.

Hacksaw Ridge is a film about having the courage to stand up for what you believe in and do the impossible. Desmond Doss refused to carry a gun, and hustled his heart out to save 75 lives at Hacksaw Ridge. This film is a worthy portrayal of a heroic man that should be remembered, especially in times when people don’t believe there are many left.