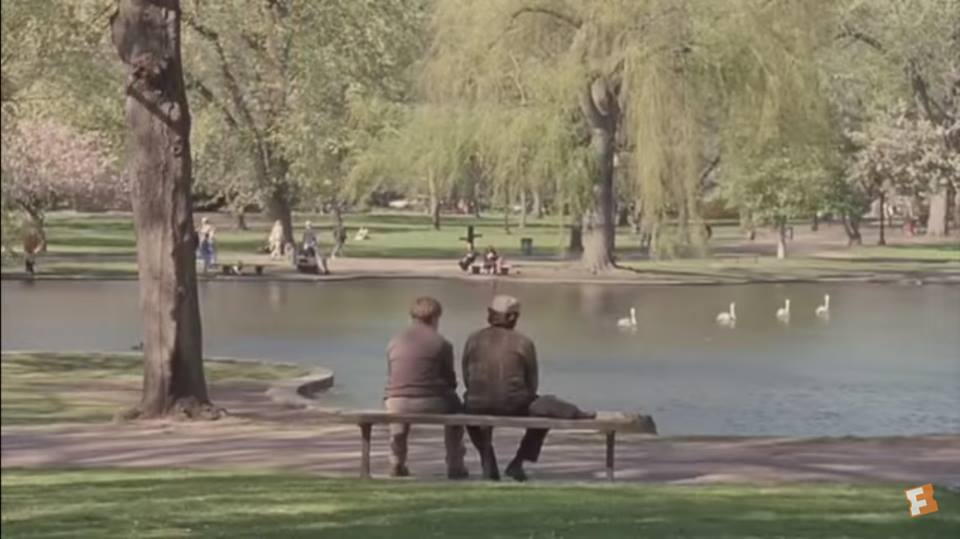 I recently noticed that there are a lot of great movie scenes that take place on park benches. This makes sense because anytime you have a scene outside, and your characters need to sit down, they would obviously do so on a bench. If it weren’t for park benches, we would have a lot of mediocre scenes with people sitting around in the dirt. Maybe it’s just me, but I’d find it hard to take an emotional scene seriously if the characters were just sitting cross-legged on the ground like they’re an attentive kindergartner.

I’ve decided to figure out which bench scene is the best of all time. I’ll accomplish this by coming up with some categories each scene can be scored in, and then tallying up the scores to see which scene reigns supreme.

The first category will be “Visual Appeal” which will cover the setting, cinematography, and (go figure) just how visually appealing the scene is as a whole. Next will be the “Overall Importance” category which will look at how much of an impact the bench scene has on the overall story of its movie. The final category will be “Ease of Access” and will cover how easy it would be for me to find and sit on that scene’s bench if I were so inclined. Each category will be scored out of 5 and scenes can earn a bonus point if they contain a particularly emotional monologue. I’m a big fan of monologues, especially when goose-bump inducing.

There was some criteria the movies had to meet to be considered for this post as well. First, I had to have seen the movie, and second the movie’s bench scene had to have a significant amount of dialogue. Sure, a lot of movies, probably every movie not set in space or Middle-Earth, contains a bench. I only considered ones where the characters had a meaningful or lengthy conversation on their bench. Without further ado, let’s get to scoring.

Forrest’s bench being situated at a bus stop does detract a little from the visual appeal of the scene. Sure there is a semi-pretty park behind him, but what is in front of him? It could be a grimy bus stop with a homeless man right across the street begging for change. Maybe the homeless guy has a pet rat named Cecil, who knows? The unkown of it all brings the visual appeal down.

Forrest Gump is essentially a movie about his life story, and because he tells his whole life story to strangers while sitting on his bench, I’m going to score it pretty high on overall importance.

For me, it would be pretty hard to sit on the actual bench featured in the scene. This is because it is located in Savanna, Georgia and Georgia might be my least favorite state. I’ve had only bad experiences there and would very much like to never visit again.

If you’ve never seen Men in Black… Actually, I won’t finish that because everybody has seen Men in Black. Will Smith and Tommy Lee Jones are fantastic as alien fighting government agents, but we have to remember that Kay had to convince Jay (who was very apprehensive, for good reason) to join the agency. Kay does this convincing on a park bench in New York City.

It’s New York City, so the scene is obviously very visually appealing. The first shot we get is the skyline of the city, and the background is some more large buildings surrounding the park their bench is located in. Nothing adds to the aesthetic of a scene like some large buildings, am I right? I am also partial to Jay’s Michael Jackson-esque red jacket, and its contrast to Kay’s black suit.

Eventually Kay does convince Jay to join up with the Men in Black, and this is very, very important. If it wasn’t for this scene the movie would just be called Man in Black and that is much less fun.

The Big Apple is, true to its name, a big place. Without any visual cues I can only imagine how difficult it would be to find the actual bench from the movie, unless it is labeled as a Pokestop or something.

Kay’s monologue in this scene is deep and shatters Jay’s worldview, so it will definitely earn a bonus point there.

In a world full of uncertainties, one inarguable fact is that Good Will Hunting is the perfect movie. You could disagree with me, but you’d be wrong and deep down you’d know I’m right. The real question, however, is whether or not Good Will Hunting has the best bench scene of any movie. I’ll do my best to set all bias aside while making my analysis.

Boston is a beautiful city, and also contains some beautiful parks. This scene in Good Will Hunting happens to be set on a bench in one of those beautiful parks. Said bench is right on the pond’s edge, there are swans swimming happily in that pond, and there are a lot of fun colors in the trees surrounding Will and Sean. I also like this scene because we don’t get any shots of the city in the background. It feels like they are on their own in a secluded park in some small town. This scene isn’t perfect though (a scene must contain Ben Affleck to be considered truly perfect). Aside from the first few seconds, it is mostly just close up shots of Matt Damon and Robin Williams’ faces. While normally I don’t mind staring into the beautiful eyes of Matt Damon, they don’t take full advantage of the gorgeous surrounding scenery. That alone keeps the scene from getting a perfect score.

Will is kind of a douche throughout 70% of Good Will Hunting. While he does have some rock solid reasons for being extremely defensive, it doesn’t change the fact that he was fairly insufferable. The resolution of the movie comes about when Sean finally breaks through with him and Will can finally start to let people in. This scene on the bench is pivotal to Sean laying the groundwork for the eventual breakthrough. For that reason I would definitely consider this bench scene important to the rest of the movie.

The best part of the bench in this scene is that it is fairly easy to locate. I have actually sat on the bench myself, so it’s going to get a perfect score in “ease of access” by default. I know it’s just a boring bench, but something about sitting on a prop from my favorite movie gave me the warm and fuzzies inside. 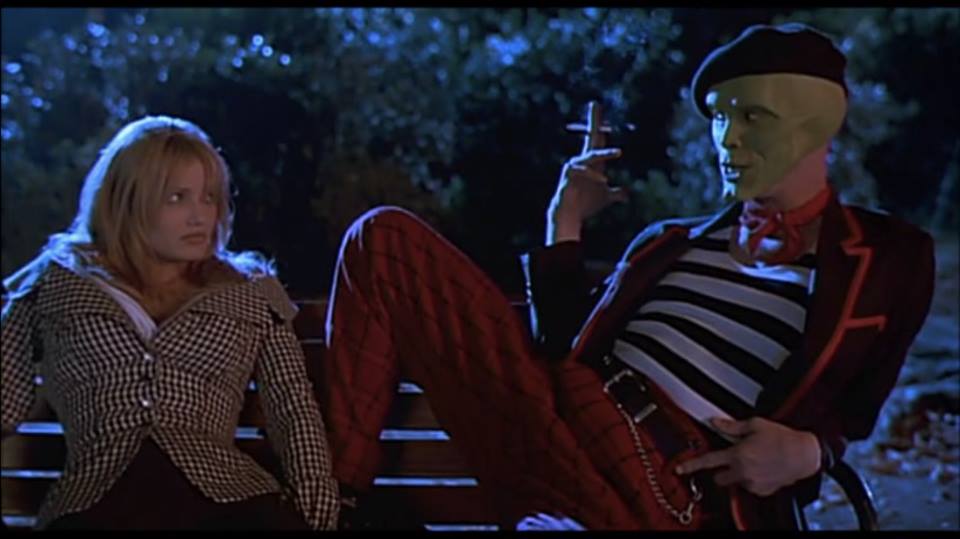 Watching this scene from The Mask made me realize just how much movies have changed since the 90’s, and truthfully, not for the better. Overall, The Mask is a fantastic comedy, but I can’t see it succeeding in today’s Hollywood. It wasn’t a remake, and was only loosely based on some other source (comic book) material. Can you imagine a random movie about a guy who goes psycho while wearing a green mask coming out now? It was unique, which can’t be said about most movies being produced today. All comedies today have the same feel, and that goes for every other genre as well. There just isn’t enough creativity going around. All that being said, The Mask does not have the best bench scene.

The scene was clearly filmed on a set, which takes away from its score. Also, it is not even a particularly aesthetically pleasing set either. It’s kind of dark and there isn’t a lot of detail. They clearly didn’t put much effort into design. Being a movie set would make it a tad bit hard for me to sit on this bench as well.

The lack of design effort is probably attributed to the fact that the scene isn’t particularly important. Stanley Ipkiss doesn’t have the confidence to talk to a gorgeous woman by himself, so he transforms into The Mask for an extra boost of confidence. Unfortunately, The Mask just spends the scene being creepy and boarder line sexually assaulting Cameron Diaz’s character. So, not only is the scene unimportant, but it contains hints of sexual assault, which will take away points from anything being scored in any competition.

The Fault in Our Stars 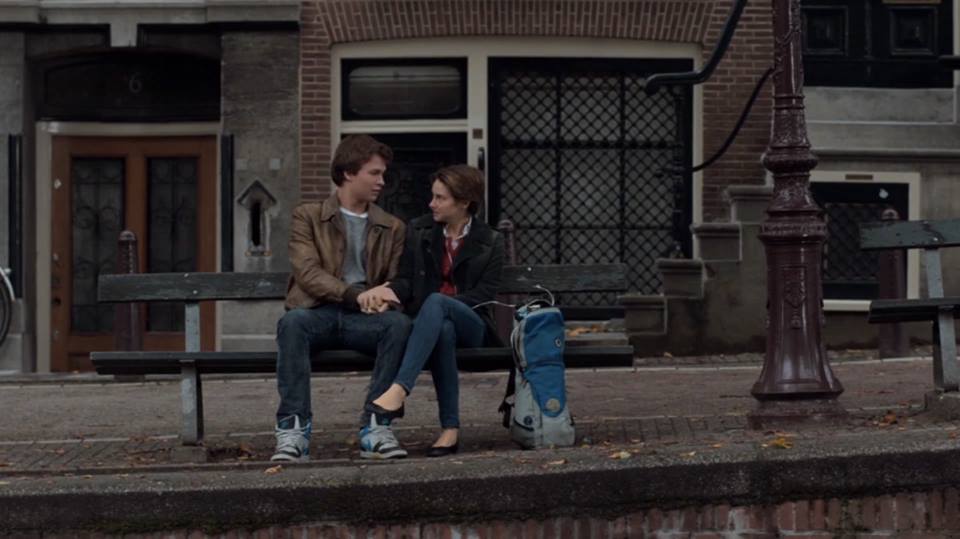 John Green books, especially The Fault in Our Stars, are a guilty pleasure of mine. I guess I’m just a big fan of sobbing into my pillow and pretending I have something in my eye when my girlfriend asks what my problem is. The film based on the book is just as heart-wrenching, and thankfully, contains a significant scene on a bench.

This scene is set in Amsterdam, which is very high on my list of places I’d like to visit (the same list that Georgia is at the rock-bottom of). Amsterdam is stunning and one of the coolest looking cities in the world. The Fault in Our Stars showcases this city very well in its bench scene and only increased my desire to visit. If a scene can be visually pleasing enough for me to want conquer my extreme fear of flying to visit that place, it has to score exceptionally well.

Ansel Elgort does a great job of making me sad in this scene, but its overall importance to the story? Meh. The meat of The Fault in Our Stars comes from Gus and Hazel meeting and falling in love and taking a trip together. Although finding out Gus is dying rather quickly turned me into, basically, a small child who just learned Santa isn’t real, it wasn’t vastly important to the story as a whole.

Do you know what my favorite part about this bench is, though? It’s that someone stole it. That’s right, someone loved The Fault in Our Stars so much that they stole the bench. That’s not even the best part. It took police about a month to realize it was even missing. Granted, they probably have better things to do than keep a running inventory on benches in the city, it’s still amusing. The fact that nobody knows where the bench disappeared to would make it just about impossible for me to sit on it in real life.

The Fault in Our Stars -8

The answer to “What is the best movie bench scene of all time?” Good Will Hunting