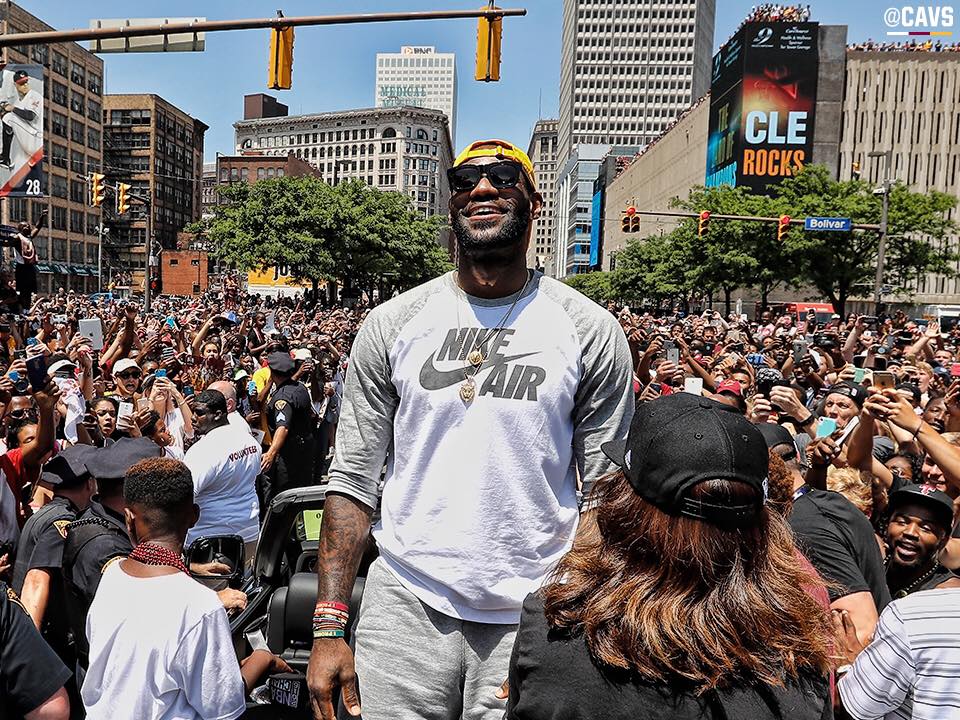 Anyone who is annually plugged into any and all happenings in the world of professional basketball can’t be too surprised by this pick. Hate it or love it, in the same calendar year where three true NBA icons retired, a new CBA was signed, the single-season record for wins was broken, the first unanimous MVP was crowned and the NBA Finals broke post-MJ television ratings records, the pick for the 2016 Winner in the NBA was easily LeBron James, However, prior to June 13th, 2016, the date of Game 5 of the NBA Finals, it would have been difficult to justify the selection of King James as the 2016 Winner in the NBA.

Now sure, there is an avenue where LeBron could have received the “honor” of being named Hardwood and Hollywood’s 2016 Winner in the NBA even if he didn’t deliver the city of Cleveland their first professional sports championship in over half of a century. If LeBron’s 2016 Finals performance was the cherry on top of a delicious sundae that is his illustrious on-court career, what he did off the floor in 2016 is like throwing a hot, gooey brownie on top of that Sundae. Now that’s a perfectly delicious dessert.

Whether you agree or disagree with the various positions LeBron James has taken on a variety of relevant social issues, it has to be mentioned that in a time where any number of social media platforms give athletes and celebrities the opportunity to voice their take on really anything they want, not nearly enough larger than life figures step up to the plate to do so. It’s a time when the words and actions of professional athletes and people in the spotlight means more than they ever have before because they are indeed so accessible, both purposely and by accident. LeBron has managed to step up and use his voice in a way that very few athletes ever have.

For 15 years we’ve expected LeBron James to become the next Michael Jordan. Regardless of if you have been cheering him on over this last decade and a half or applauding each of his failures, the chase has been something everyone is aware of to some degree. Whether LeBron can reach that level, or catch that ghost, is still up for debate. Here’s what we know though … nobody has kept up the pace on this chase like LeBron has. His accomplishments are well-documented. His game to game ceiling is just as high as MJ’s. His longevity over time and resilience to remain the league’s alpha dog despite nearly constant media scrutiny and a steady stream of young up-and-comers is unparalleled. Yet, when his career is all said and done I imagine that the masses will still refer to MJ as the GOAT.

One area where LeBron has already surpassed MJ is off the floor influence. The greatest and only detriment to the legacy of Michael Jordan is that his resume off the court doesn’t come close to touching what he did on the floor. We’ll remember his fearlessness in speaking his mind on issues most athletes typically don’t go near, his willingness to be a steady voice of reason in tense times throughout a polarizing Presidential Election, his very sincere and heartfelt message he shared with Chris Paul, Carmelo Anthony, and Dwyane Wade at the ESPY’s, and his commitment to finding ways to improve a community that he grew up in.

All the off floor stuff will help LeBron’s legacy age long after he retires from the NBA. He will eventually be forgiven for “The Decision,” the Welcoming Party, and every other perceived and legitimate act of arrogance and entitlement he’s dealt with along the way, and he rightfully should be forgiven. LeBron James entered the public eye when he was only 16 years old, and since then we’ve seen a teenager facing astronomical expectations mature into a man who has come damn close to meeting or exceeding all of them, all while avoiding any major character-crippling public mishaps. Never any familial issues or legal troubles. Go ahead and say that he will never be MJ, but because his philanthropy and activism are unmatched by any athlete in his era, he could end up being our generations Jim Brown, Muhammad Ali or Bill Russell.

With all of that said, we shouldn’t be too quick to forget about what LeBron and the Cavaliers were able to do on those three nights in June. Detractors will point to Andrew Bogut‘s injury and Draymond Green‘s (deserved) suspension for Game 5 and suggest that those two incidents somehow minimize what the Cavaliers accomplished. Cleveland had to win two games at Oracle Arena, the rowdiest arena in the league. They had to beat a 73-win team three times in a row in a one week span. They had to topple the league’s defending two-time MVP, who was one half of the greatest shooting backcourt in NBA history. They had to come back from a 3-1 deficit in the NBA Finals … a feat that no team has ever accomplished.

In his sixth straight Finals appearance (seventh overall), LeBron was the driving force, the heartbeat and the best player on a Cavaliers team that was facing nearly impossible odds. He had help in that Finals series — Kyrie Irving was the second best player in the series. He clearly outplayed Stephen Curry and he drove dagger three-pointer into the collective heart of the Golden State Warriors with 53 seconds left in Game 7. Kevin Love was a punchline for the majority of the Finals, but somehow managed to play the best defensive possession of his immediately after Kyrie hit that go-ahead three-pointer — but nobody else could match what LeBron brought to the table.

In those final three games of the 2016 NBA Finals LeBron averaged 36 points, 12 rebounds and 10 assists per game. He shot 51 percent from the field and 42 percent from behind the arc against a team that held him to sub 40 percent shooting the year prior in the NBA Finals. He scored 41 points in Games 5 and 6 and answered with a bucket every time the Warriors threatened with a run in those two games. He finished the Dubs off with a Game 7 triple-double and a play that would turn out to be the marquee highlight of a career that has SO DAMN MANY marquee highlights … the chasedown block of Andre Iguodala with under two minutes left in a tie game.

LeBron’s greatest contribution during the Finals may have come, again, off the floor. The evolution of his game over time that has been the most fun to watch hasn’t been his improved low-post mechanics or a more consistent perimeter jumper or a greater concern with playing defense. Over time we’ve seen LeBron become the perfect kind of leader in today’s NBA. As he said when he announced his return to Cleveland in July 2014, “I get a thrill out of bringing a group together and helping them reach a place they didn’t know they could go.”

He’s a tireless worker in the offseason and is maniacally devoted to keeping his body in peak condition as he enters the twilight of his career. He’s more conscious of what it takes for his team to be able to grind through an eight-month marathon than any other current star is. He’s fully aware of the kind of nurturing or push each of his teammates needs. And after the Cavs fell into a 3-1 hole in the Finals, LeBron sent a group text to the rest of his teammates that set the tone for the next three games:

LeBron delivered on that promise to his teammates; he got the Cavaliers home for a Game 6. Just days later a lifelong dream came true. The native son of Northeast Ohio had to take his talents to South Beach to learn how to win an NBA Championship. He came home and took a group that had virtually no Playoff experience to the NBA Finals. In their second season together the Cavaliers brought the city of Cleveland a title for the first time since Jim Brown was running all over the NFL.

The Kid from Akron is now something like a folk hero in Northeast Ohio. I had been to Cleveland before LeBron James was drafted by the Cavaliers and I visited even more times afterwards. Cleveland, pre-LeBron, was nothing like the city Cleveland became after LeBron arrived. He not only changed the culture of a sports franchise (twice), he improved the quality and the collective mindset of an entire city. He made Cleveland the City of Champions and gave the people who called Cleveland home a reason to believe. He turned a dream into a reality and he made us all Witnesses.