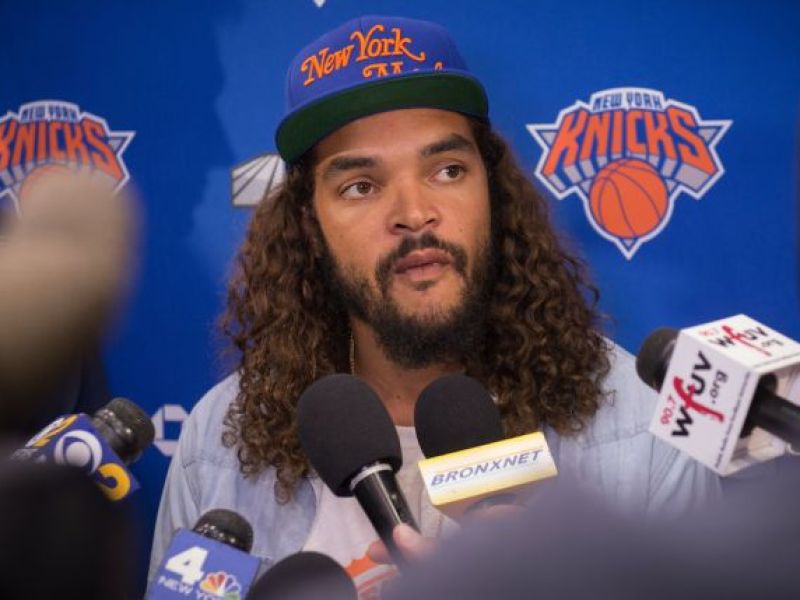 A few weeks ago I wrote about maximizing Joakim Noah despite his clear decline. It did not take long for me to eat those words. Heading into this week the Knicks were 14-10 with a share of third place in the Eastern Conference. At full health they are still are far cry from contenders to the Cavaliers’ throne, but at the bare minimum they are a playoff team. According to BBall Breakdown the Knicks are the only team in the league with a winning record despite their starting unit having a negative net rating. The source of that negative rating can be traced to one player. Phil Jackson’s $72 million man, Joakim Noah.

To say Noah has been bad would be a gross understatement. Per 100 possessions this season Noah is averaging 10.3 points, 18 rebounds, 6.1 assists, and 1.9 blocks while shooting 47-percent from the field . Not too bad for a center right? Well throw in the fact that he is dead last in the league in free throw percentage at 30-percent and sports one of the worst offensive games in the league today by far. Noah’s ineptitude has been highlighted by the absence of his longtime friend and teammate Derrick Rose who has been dealing with back spasms all week. With no Rose the Knicks have needed extra minutes and points from everyone, especially their richest free agent. Noah has responded with 8 points, 6 points and 2 points in his last three games. At a certain point the ability to grab rebounds does not save a player from being a bust everywhere else especially when his replacements are playing considerably better.

Kyle O’Quinn has been playing like a man that was given $72 million this offseason. One of the league’s better bargains ($4 million per year for two more seasons), O’Quinn does everything Noah can do just way better. This season O’Quinn is averaging 20.3 points, 17.4 rebounds, 4 assists, and 3.8 blocks while shooting 57-percent from the field per 100 possessions. When he is on the court the Knicks have a noticeably tougher presence. Noah is often seen getting bullied–most notably by Mr. Twitter Fingers, Enes Kanter early in the season–while O’Quinn has been the bully. On offense O’Quinn’s passing has been on par with Noah’s which is saying a lot given Noah’s passing prowess. Carmelo Anthony has developed a nice ESP with O’Quinn, hooking up with the big man countless times on this alley top play:

In the three games O’Quinn started in place of Noah the Knicks are 4-0. His best performance came against the latter part of a back-to-back against the Timberwolves in which O’Quinn scored 20 points, pulled down 14 rebounds, and added two blocks to carry the Knicks to victory.

In addition to O’Quinn the Knicks’ other bargain big man, rookie Willy Hernangomez, has also played better than Noah. The rookie from Spain does have his lapses on defense, but it’s clear that him and his former Sevilla teammate Porzingis are the front court of the future for the Knicks. Hernangomez already possess an impressive post game on offense and has no problem getting physical. Against the Hawks earlier in the season Hernangomez frustrated Dwight Howard and held his ground in a Knicks win. In his last game he played a season-high 28 minutes and contributed 17 points and 10 rebounds. So far this season the rookie is averaging 21.1 points, 17.8 rebounds, 3.1 assists, and 2 blocks while shooting 57-percent from the field per 100 possessions.

The writing is in the stat sheet and even more clear on the court. Head coach Jeff Hornacek knows it too. After the loss in Denver on Saturday night he said this:

“We’re not getting off to great starts. It’s not all on Jo. We’re just trying to find a combination to get us going. We like his energy and what he can do that way.t’s hard to tell because Derrick hasn’t been in there. There is some concern with starts we’re getting off to, even with Derrick. We’re giving up a lot of points in the first quarter, so I don’t think we’re at that point [for] panic time there. It’s something to keep our eye on.’’

There is still time for Noah to turn it around, but how much can realistically change? He’s been a considerable downgrade to Robin Lopez in every department except passing. When the Knicks have lost most of the games it has been because of slow starts in the first quarter. They rank 25th in the league surrendering 27.7 points in the first quarter of games. On offense it’s usually four on five so teams can leave Noah alone until he is three feet from the basket. If he were able to catch lobs like DeAndre Jordan that’d be okay, but he can barely raise up for a jump ball.

Hornacek says the slow starts are not all on Noah, but anyone with a pair of eyes can see that. The true source of the problem with Noah is that he was signed the assumption the team would be running the triangle. This was before Hornacek wisely changed course for a quicker paced offense featuring pick-and-rolls leaving Noah in no man’s land. The Knicks were able to dump the triangle mercifully and now it may be time to dump that last remnant of that archaic system.