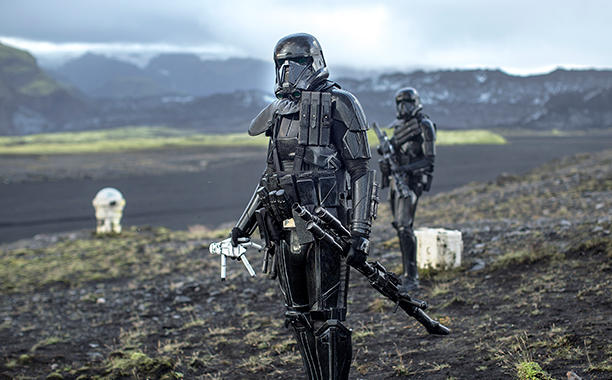 The Star Wars series is filled with Jedis and Sith Lords of unworldly power, but Rogue One brings us a story of people that find power in hope. Gareth Edwards directs Rogue One, the first Star Wars spin-off, and is joined by a capable cast, including Felicity Jones, Forest Whitaker, Donnie Yen, and Alan Tudyk.

Gareth Edwards does a fine job in the director’s seat. The script is solid, especially for a story that we already know the gist of. The audience knows the ending, yet it’s still a riveting affair. It’s packed with callbacks and details that tie in with Episode IV very well, and yes, it’s a stand-alone movie, but it’s dependent on Episode IV to work completely. It adds a whole new layer to the film that started it all, and is a nice change of pace from what we’ve been given in the Star Wars universe so far.

The film really bounces you around to different places without holding too much interest in the first act, as it introduces characters, and then things start to warm-up by the second act. By the third act, we’re at the bridge to Epsiode IV, and the action shines in all its gritty glory. There’s even one scene in particular with Darth Vader that is absolutely perfect, and makes up for the underwhelming bit of a fully suited up Vader we got in Revenge of the Sith.

There are plenty of scenes where plot details are being discussed, and it seems like a lot of exposition at times. Character development takes a backseat for the most part, and although Jyn Erso, who is the lead character, gets flashbacks, we still don’t really know too much about her to care enough. Each character didn’t need a straight forward backstory, but a few moments where the characters are fleshed out a bit more through natural dialogue or mannerisms would’ve helped. We can’t fully invest in the well-being of the characters, but we are invested in the cause, and their role in assisting the main characters in the original trilogy.

Felicity Jones and Alan Tudyk in Rogue One

Felicity Jones gives a committed performance in her role as Jyn Erso, a spirited rebel who’s father is Galen Erso, played by Mads Mikkelsen, a brilliant scientist who makes a significant contribution in the creation of the Death Star. Jones is courageous and bold as Erso, yet also handles the emotional side of the character very well. The film juggles many characters, but there are a few standouts. Donnie Yen playing the blind, Force-sensitive Chirrut Imwe is very entertaining, along with Wen Jiang as his friend, Baze Malbus. Diego Luna as Captain Cassian Andor also does well in his role as a gutsy rebel, and so does Riz Ahmed as Bodhi, a defected Imperial pilot.

The standout of the film is definitely Alan Tudyk as the reprogrammed Imperial droid, K-2S0. K-2S0 has the best lines in the film, and oddly enough, is the character most viewers will care about the most. He has no filter, making for great humor, and still manages to pull off some heroic scenes as well. James Earl Jones is back to voice the iconic Darth Vader, and Spencer Wilding is in the black suit to act out the mannerisms. I won’t say much, but I will say this: the Darth Vader we see in this film reverts him from a plush doll back to the most menacing villain in the galaxy. After the prequels, we all really needed this reminder.

At its best, Rogue One shows us that the power of determined people working together towards the same idea worth fighting for can triumph over evil, even if it’s as imposing as the Empire. Rogue One definitely cracks the top five in rankings of the Star Wars films. “I am one with the Force, and the Force is with me.” Rogue One shows us that the Force is relative past the silver-screen; it is whatever you believe in that allows you to persevere.