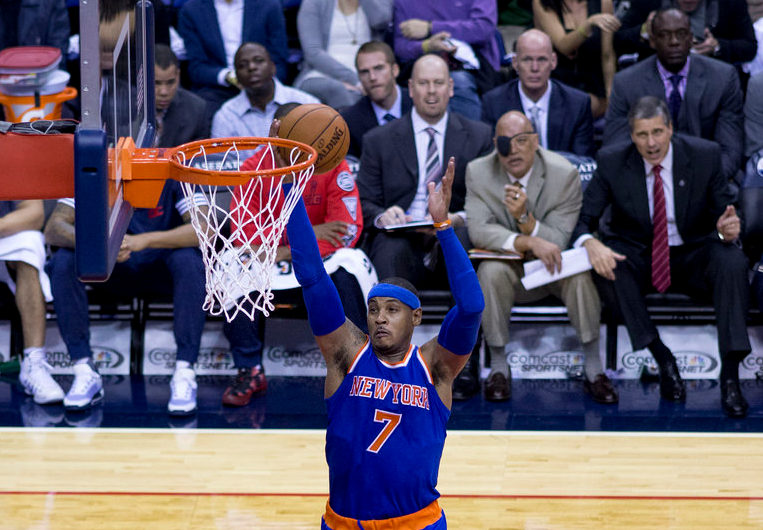 2017 has gotten off to a ‘Knicks’ start and anyone familiar with the team knows that’s a bad thing. Following a promising early December run where they peaked at third in the Eastern Conference, the team has nosedived back down the standings to tenth place with 16-18 record. They are currently on a five game losing streak with no sign of turning it around. It is not too late to turn it around and what better time than the start of the year. Let’s assume this is all a hangover from 2016. The new year has just started so there is still time to change. Here are some resolutions the team can make to turn it around.

James Dolan has been surprisingly dormant this season. He has not meddled to the best of our knowledge and for that we should be thankful. His most newsworthy moment came this week, but that had to do with the Rockettes, not the Knicks.

It is never easy to fire friends, but then again it is idiotic to work with friends unless that friend is a genius in his or her field. Rambis will never be considered a genius in anything other than losing. As the defensive coordinator he has watched his unit continuously leave shooters wide open and slashers get the the rack like they have EZ-Pass. Jackson has made mostly solid roster moves (except you know who for $72 million) and can still make things right on the coaching staff if he finally cuts his old pal loose.

What does Steve Mills do exactly? Is he a glorified yes man? If he is not how about acting like a GM for once and tell your boss the Zen Master to fire his buddy.

One thing that has become clear to me and I think a lot of the smarter Knicks fans is that Jeff Hornacek is the right coach. Tom Thibodeau would have been great, but Hornacek is not a bad consolation to say the least. He knows what offense to run to best utilize the team’s sole asset, Kristaps Porzingis, and is not afraid to call his team out for not playing defense. If given full control I believe he can be a coach that leads them into the playoffs, but getting full control in MSG is easier said than done.

Carmelo Anthony is not going anywhere. He wants to remain in New York and that is a good thing. Such few star players actually want to play for the Knicks these days so for that Carmelo should never be fully hated in NYC. Since he has no plans of leaving town how about he tries a new course of action and buy into his head coach. Carmelo has developed a reputation of butting heads with his coaches. It is clear that he made a mistake in not trusting Mike D’Antoni and he cannot afford to make the same mistake twice. Hornacek is good basketball mind that knows what he is doing on offense. Whether Melo likes it or not the team now goes as far as Porzingis takes them. It’s time to cut the ego tripping and going off script like this:

Melo calls his own number…

Jeff Hornacek (upper left hand corner of the video) seems annoyed and turns his back and walks away… pic.twitter.com/TOSDqb2CPV

Kristaps Porzingis is in an uncomfortable situation. He has to know that he is the best player on the team at this point, but seems to be a company guy meaning he will not step on Melo’s toes. Even if he knows he should be shooting the last shot Porzingis seems to defer to his captain and the results have varied. With him out of the lineup the past two games the Knicks have been tragic on defense and lackluster on offense. Porzingis’ mere presence on the floor opens up lanes for Derrick Rose and gives Melo room to operate. Once he returns to action he has to look to take over games whenever he has the ball in his hands.

It started out all too well for Derrick Rose in New York. He was playing within the offense and rediscovering that D. Rose mojo. Then it all went to his head. Rose has been good from an individual perspective, but that has not translated to wins. Against the Hawks we saw the return of Rose’s hero ball antics, not getting Porzingis (who was the hottest player on the floor for the Knicks at the end of regulation and overtime) the ball for the final shot, instead settling for that mundane floater and turning the ball over. Maybe it has already been made clear to him by management that he will not be a Knick past this season which has triggered this return to ball hogging. Whatever the problem is someone in that locker room needs to tell Rose that this is not Chicago and this will never be his team.

Say what you want about the contract or abysmal play at least Joakim Noah gives a shit. That’s more than you can say about a lot of players the Knicks foolishly overpaid. He is a train wreck on offense, average on defense, but he does have a knack for rebounding. In his last four game he has pulled down double-digit boards in three of them. Given that one of Porzingis’ weak spots is his rebounding Noah fits nicely. What can make life easier for Noah and the team is if he can start knocking down his free throws. He is currently shooting 44-percent from the line which has allowed teams to implement “Hack-A-Noah” down the stretch, putting any momentum to a halt. Unlike his defense which will never come back because of his deteriorating body, free throws improve with practice.

Courtney Lee–Set the tone on defense

When Lee signed with the Knicks it would be with the expectation that he would be the top perimeter defender. Lee has been solid on offense operating as a spot up shooter that can put the ball on the floor, but so far his defense has been nothing special. He hasn’t been terrible, but guards are not exactly afraid of going against the Knicks. That probably has more to do with the lack of defensive effort by Melo and Rose, but unfortunately they will never be held responsible for that.

Of the three big names brought in this offseason Brandon Jennings has worked out the best. He has taken on the sixth man role nicely and when he’s right that second unit is a difference maker. But just like fellow newcomer Rose sometimes Jennings like to play hero ball. He has always been a good ‘bad shot shooter’ so the step-back three with 20 seconds left on the shot clock go in at times, but most of the time is a terrible decision. There are some games where Jennings takes too many of these, but others where he takes none at all and plays the role of facilitator. That is the Jennings the Knicks need to win and the Jennings Knicks fans would welcome back with open arms next season and beyond.

Kyle O’Quinn–Keep the energy up

Kyle O’Quinn’s best stretch as a Knick came in early December during the team’s best run of the season. O’Quinn was coming off the bench with ample supply of energy that had a chain reaction on the team. He was cleaning the glass, protecting the rim, and filling his role on offense. He has still outplayed Noah considerably and if price tags were not so heavily associated with playing time O’Quinn would have taken over a starter two weeks ago. He still remains on the bench and recently that energy hasn’t been there. For the Knicks to win KO is going to have to bring that same energy that gets The Garden riled up.

Why is it that the throw ins in big trades always seem to perform the best? Justin Holiday’s name was rarely mentioned in the Rose trade, but he has made sure you know who he is. Nicknamed “Fireman”, Holiday is by far the Knicks best perimeter defender on the roster and has developed a decent offensive game hitting corner threes and midrange jumpers. While many Knicks fans want Rose gone as soon as possible it would be nice to see Holiday stick around.

Lance Thomas–Get back to being scrappy

Last season Lance Thomas was doing what Holiday is doing this year, the dirty work. Thomas earned every dollar of his new deal, but this season he has not made much of a difference. The rotation looked much better with Thomas out. Mindaugas Kuzminskas was given more court time which gave the team a boost on offensive and Holiday was able to carve out a nice chunk of minutes at the wing. So far Thomas has been looking to shoot the three which is cool as long as he continues to hit at a 40-percent clip, but this team needs more guys to do the dirty work and Thomas fits that bill.

It is hard to imagine a better bargain than Kyle O’Quinn’s $4 million per year deal, but Hernangomez has his teammate beat. The rookie big man is locked up through 2020 at an annual cap hit under $1.5 million. One third of the way through his rookie campaign it is obvious his offensive game is mature for his age. The main thing keeping him off the floor is his defense. As any young player is prone to do Hernangomez sometimes struggles with rotations specifically on drives to the basket. He has no issue banging down low which is a great thing for the Knicks, now he just has to learn how to harness that physicality properly.

The best lineup the Knicks have trotted out this season has featured an International look with Porzingis, Hernangomez, and Mindaugas Kuzminskas as the front line. It did not take long for The Garden crowd to serenade him with Kuz and become a fan favorite. When he has been in during key moments he has played well for the most part. He hit big threes in the fourth quarter against the Timberwolves and Trail Blazers. Where Kuz gets in trouble is taking stupid shots and fouling when he doesn’t have to. Lance Thomas’ return has reduced his role significantly, but strong play in the minutes he is given can go a long way to returning to a more prominent role.

Sasha Vujacic is what he is. Assuming he is the veteran presence that is mentoring the European youngsters get accustomed to the league Vujacic is doing a stellar job. The more time he helps Porzingis, Hernangomez, and Kuz adjust and the less time he spends on the actual court the better the Knicks will be.

Marshall Plumlee–Keep getting them checks

It’s unlikely Marshall Plumlee will ever play meaningful minutes for the Knicks this season, but he can surely keep getting those checks!

Look I know it seems like this nightmare will never end, but we can’t give up now. It is only a matter of time until this team pulls it around. Plus, what other options do we have? The Nets? The Lakers? Just ride this thing out and remember how happy Cubs fans were when their lovable losers finally won.