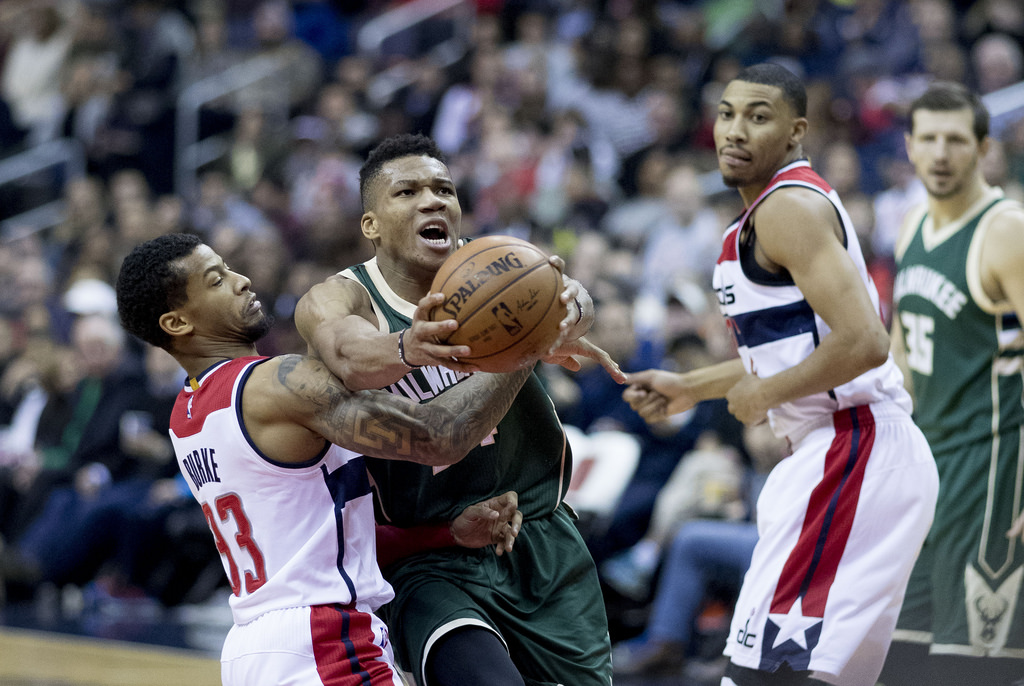 For the past six years the Eastern Conference has been run under a dictatorship. Once LeBron James outlasted his greatest rivals the Boston Celtics–lead by Paul Pierce, Kevin Garnett, and Ray Allen–all roads to a Finals appearance from the East went through him. Carmelo Anthony had the skills to give LeBron a run for his money, but the same could never be said for any iteration of the Knicks teams he has been on (even now with Kristaps Porzingis). Jimmy Butler fought alongside Derrick Rose to no avail in Chicago. Dwyane Wade was LeBron’s wingman for a majority of his run and without him he is a worthy opponent, but not much of a threat. Paul George arguably had the greatest success against LeBron only to fall short in consecutive Eastern Conference finals before falling back down the ranks.

This season more than ever it looks like LeBron’s team will again represent the East in the NBA Finals. No player or team has a realistic chance of dethroning the defending champs this season. But one thing we have learned it that someone is finally capable of taking down the King. Since Giannis Antetokounmpo entered the league he has been called a Greek Freak, Unicorn, and other variations of something we have not seen before. You can add Kryptonite to the endless list of nicknames.

Giannis has harnessed the unlimited potential he flashed through his first three seasons and used that to ascend to the most dominant player this side of Oklahoma City. Every year a player makes the “superstar leap” which is sports talk for the intersection of player expectations and actual output. Giannis has made that leap this year and then some. He leads the Bucks in every statistical category and ranks fourth in the league in PER with a rating of 28.90.

In case you are not impressed take a look at this Tweet that contains an excerpt from Rotoworld Season Pass:

He’s always popped off the screen during a Bucks game–but that had more to do with the quality of players on the roster or lack thereof. A solid measuring stick for a player’s talent is watching how the other team reacts when he is on the floor. Giannis is impossible to ignore. Every night there seems to be a clip of him violating the competition in some fashion. Even Russell Westbrook is not safe.

One other measurement I like to use for superstars is how they perform in MSG. For as long as I have been watching basketball every star player looks to have their signature game in The Garden. This week Giannis crushed that test going off for 27 points, 13 rebounds, 4 assists, 3 blocks, 1 steal, and the game-winner.

His play in addition to his budding star sidekick, Jabari Parker, has the Bucks ahead of schedule in their rebuild. Giannis’ early arrival may have caught some of us by surprise, perhaps even LeBron.

When you watch Giannis now it triggers flashbacks of 2006 LeBron. We’ve already documented how freakish LeBron is, so let’s talk about the Greek Freak. At 6’11 with a 7’3 wingspan he is the tallest point guard ever. This can all be credited to Bucks head coach Jason Kidd who decided to put this 6’11 monster at point guard. Who better than a top five point guard to mold a player with a sponge for a brain and a frame that can do anything it pleases on a basketball court. We will never see another Giannis just like we will never see another LeBron.

Here is LeBron at 22 vs. Giannis at 22 per 100 possessions via Basketball-Reference:

There is still a lot of basketball left this season so Giannis’ numbers could fluctuate a bit, but judging from what we have already seen this stat line will hold or get better.

The one key advantage 2016 Giannis has that 2006 LeBron never had is someone in close proximity to chase. There were a handful of good teams in the Eastern Conference at the time, but there was no single player to chase or one elite team to hunt down. Dwyane Wade’s Heat were not the same without Shaq. The Celtics had yet to form the big three and the Pistons were at the tail end of their best years. Kobe was the only legitimate rival but he was in the West. Giannis does not have that problem. He has a King to chase right in the division.

When the Bucks and Cavs met for the first time this season we got our first taste of the forthcoming clash of these hoops titans. For the first time I saw a LeBron James-led team get physically dominated. It’s one thing to watch the Warriors light it up from three and another to watch a 6’11 Kraken storming down the floor. Giannis attacked the Cavs wire to wire. He glided into the paint whenever he pleased. Any pass thrown in his vicinity was gobbled up and in transition he is developing a super Eurostep that could rival a Manu Ginobili’s as the slowest yet unstoppable open court move in basketball. He looked like he wanted that crown.

LeBron took notice and even threw a slight at his new threat, claiming the Bucks–Giannis and Jabari Parker specifically–seem to only get up for games against the Cavs. ESPN’s Dave McMenamin had this to say about LeBron’s feelings towards the young Bucks.

Fellow Cavs star Kyrie Irving chimed in saying that it would be great to play the Bucks in the playoffs.

“I hope. I hope, man. I hope,” Irving said. “They’re a great young team. It would be great to go four games against them. I’m fired up to go against them every time now, for real. Ever since they kicked our (butt) in Milwaukee, it’s been personal and it’s going to continue to be personal.”

If you were picking up a scent of petty jabs within the praise from LeBron and Kyrie it’s because it was.

LeBron does have a valid argument. Giannis plays above his season average against the Cavs, going averaging more points (29), rebounds (10), and steals. LeBron responded the next time these two met for a home and home. The Cavs swept the back-to-back and LeBron played superb in both dropping 34-12-7 in the first game, including the game clinching three-pointer, and 29-9-6 in the second. Giannis responded with 25-13-2-3-2 and 28-5-5-1-2. The mini-series made it clear–a rivalry had been born.

Giannis is aware of the challenge in taking down LeBron. In his Sports Illustrated profile he talked about how tough it is facing the King.

“You feel different after you play him. Your legs, your body, you’re sore everywhere. Sometimes you have to lie to yourself, lie to your mother: ‘Yeah, I’m good, I’m good.’”

A year ago I jokingly said Stephen Curry was the Marlo Stanfield to LeBron’s Avon Barksdale. I think my comparison was right only Curry wasn’t the guy, Giannis is. The Greek Freak is one of the only guys in the league that can realistically take on LeBron for seven games and win. His hands are 12-inches long, bigger than known LeBron stopper Kawhi Leonard’s and his 7’3 wingspan makes him one of the few guys that can meet LeBron at the rim.

These two will showdown one more time this season and could meet again in the playoffs if the Hoops Gods are gracious enough. While LeBron and the Cavs remain in cruise control until April, Giannis and the Bucks will keep chasing. Because if there is one thing Kidd has passed along to his rising star it’s this–when you come at the King you best not miss.