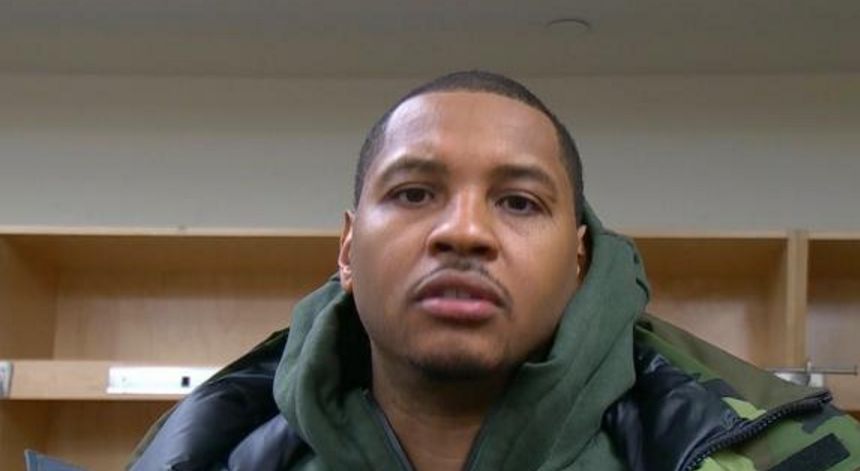 Carmelo Anthony trade rumors have become a traditional period in every Knicks season. Since the 2013 season–that looks more like an anomaly with each passing disappointment of a season–there comes a point in the season where the team is losing at such an alarming rate fans and media begin to question whether the Knicks should trade Melo and rebuild. Each year the answer to that question is a resounding “yes” yet each year yields the same end result–’Melo wants to stay in New York and win here’.

This season was no different. Phil Jackson and Melo have never been right for each other and if it weren’t obvious the previous two years it’s glaringly obvious now. The source of the beef could be Melo’s loud support against the triangle offense. Jackson has been on a petty crusade ever since. Over the summer he ignored Melo’s request for the team to interview Tom Thibodeau for the vacant head coaching position. Jackson balked. It seemed as if he were plodding long enough until the only candidate was his good friends and known loser Kurt Rambis (no other excuse for a team president taking a vacation in the middle of a head coaching search), which would tick anyone off let alone a guy who is exiting his prime.

Next was Jackson’s interview with CBS Sports in where he pointed out that Melo tends to stall the offense. That followed a brief sit down between the two to clear the air. All was good for the time being until the team began their traditional January swoon. After jumping out to 16-13 start to the season the Knicks are currently 18-24. Jackson has been mum for the duration of the swoon but his media puppet, FanRag Sports’ Charley Rosen, relayed all of Jackson’s thoughts in his January 12th piece. Rosen had no problem taking a wet shit on Melo capping off one of the pettiest breakdowns you will find with “the only sure thing is that Carmelo Anthony has outlived his usefulness in New York.”

This is the first time Melo has sounded like he was ready to give in. Maybe he was ready for a trade after all. Maybe Jackson would finally get his way and force his star player out of Madison Square Garden. The problem is there is nowhere for Melo to go. Predictably Jackson and Melo broke bread yet again on Tuesday and yet again Melo reiterated that he does not wish to waive his no-trade clause because he wants to play and win in New York. Until next year fellas. Unless Jackson decides to use his opt-out clause this summer he and Melo will be together until at least 2019 when both their contracts are up.

Had this meeting the two held on Tuesday afternoon taken place a year ago Melo would most likely be donning a different jersey by February. At the time Kevin Love was still having trouble adjusting to Kyrie Irving and LeBron James. The Clippers still had a reasonable shot at knocking down the Warriors if Chris Paul was given one more guy that can create his own shot. Even the Rockets could have used him with James Harden struggling to keep the Rockets afloat. Now Love has filled perfectly in line with the Cavs, the Clippers are likely done, and Mike D’Antoni probably wants nothing to do with Melo. Oh and then there is the no-trade clause.

For as wise a person Jackson pretends to be, signing Melo to $124 million contract was already stupid given the fact the team should’ve went into rebuild mode. Throwing in a no-trade clause and a $10 million trade bonus was the height of stupidity. Jackson gave Melo the gun to kill him with and maybe that is what’s bugging the Zen Master so much. To quote the legend Marlo Stanfield, Jackson wants it to be one way, but it’s the other way.