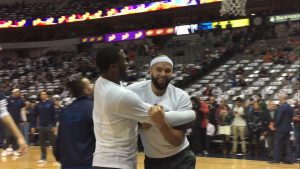 NBA trade talks have been underway for some time, and now Dallas Mavericks point guard Deron Williams is rumored to be headed to the world champion Cleveland Cavaliers in a possible trade for Iman Shumpert.

At least that’s the word on the streets.

The only problem: The Mavs claim they’re not interesting in trading Williams, who also isn’t interested in a buyout.

The NBA trade deadline isn’t until Feb. 23. So the Mavs have plenty of time before they have to show their hand on whether Williams stays or goes. Fort Worth Star-Telegram