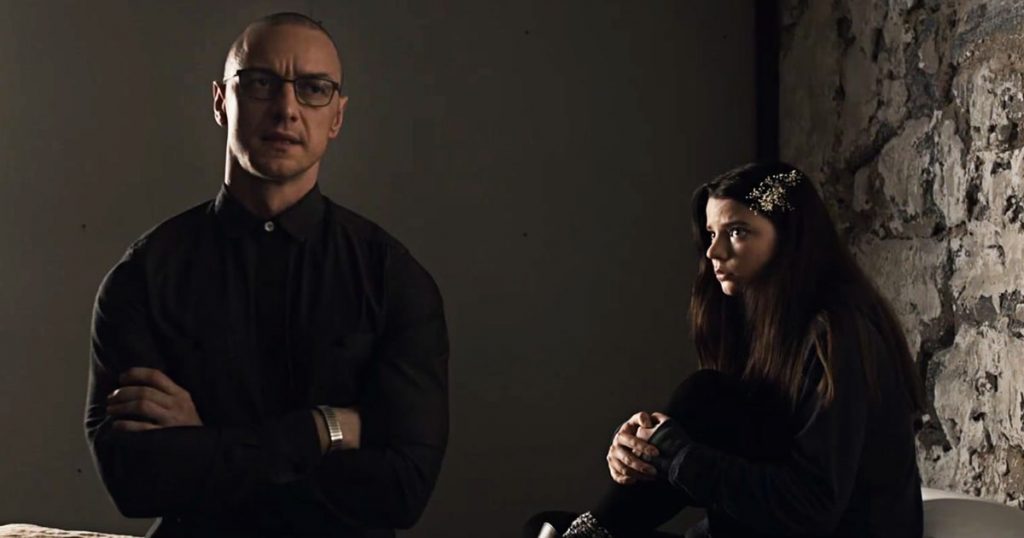 M. Night Shyamalan has returned to form with his latest thriller, Split. Shyamalan is a director that was once compared to the likes of Alfred Hitchcock until he made some poor, experimental choices. Now he’s back in a genre he’s comfortable in, and tells the story of a man that harbors 23 different personalities, with one on the way that seems to be dangerous and extraordinary. James McAvoy takes the challenging lead role, and is joined by the talented up and coming actress, Anya Taylor-Joy, and Betty Buckley.

M. Night Shyamalan takes his time to develop his story, and uses eerie lighting, claustrophobic spaces, and subtle details to show character motivations in order to orchestrate a fine thriller. He really allows McAvoy to shine, and plays with silence and glares to raise the tension. He’s always been masterful in creating tension, and he flexes that ability here, especially with McAvoy’s transitions between personalities. Character development is one of the film’s strong points, as the two main characters, Casey and Kevin, have their stories revealed piece by piece with care.

The premise of Split isn’t something entirely new. The intentions of the captor and the reasoning behind the kidnapping of the three teenage girls could’ve been more intriguing. The concept is a sharp hook for audiences, but the film maintains full interests only in spurts. The pacing of the film is a bit muddled, especially with some of the scenes that involve the psychiatrist. The actress, Betty Buckley, was fine, but the film spent a little too much time there. Now, having said that, the finale of this film changes the way you look at it entirely.

In more ways than one, James McAvoy is a beast in Split. His facial expressions, tone of voice, and mannerisms for each personality he plays are very distinct, and he manages to balance them with success. Every time he’s onscreen, he is just magnificent. He’ll seamlessly transition from a nine-year old boy named Hedwig to a strict nun named Patricia, and then to an alpha male with OCD named Dennis. The audience gets to enjoy several different characters from McAvoy, and he doesn’t disappoint.

Anya Taylor-Joy gives a more subtle supporting performance as Casey, and you can really feel the character’s history of pain by the way she carries herself. Once you find out the reason behind her somewhat calm demeanor in the horrific situation, you realize how her character’s actions make sense. In all honesty, the other two girls trapped in the room feel like throwaway characters, as Anya Taylor-Joy’s character, Casey, shines.

Without a doubt, Split is M. Night Shyamalan’s comeback film. James McAvoy gives a tremendous performance, and Anya Taylor-Joy continues to impress early on in her career. Shyamalan gives us not only a solid thriller, but a story about damaged people, and how they have the power to be something more.

After all the major events with The Beast, I thought Split was a fine movie; however, the ending after the title card shows up makes it even better. This isn’t just a film about abused people that persevere, but it’s about the creation of a villain. David Dunn from Shyamalan’s Unbreakable is going to have a showdown with The Horde. What more can you ask for? In a world where cookie-cutter superhero flicks are churned out year after year, this is a refreshing throwback to a superhero world that’s much closer to home. Shyamalan surprised us with an origin story that we didn’t know we wanted.