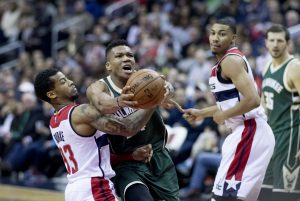 Do the math and Giannis Antetokounmpo’s assist-to-turnover ratio is 1.83 – the worst of the top 30 assist leaders in the NBA.

When the orchestrator of your offense has such a dismal turnover-to-assist ratio, it’s almost inevitable his team is going to struggle. The Bucks are struggling and in a big way.

They have lost eight of their last 10 games, with only the inept Brooklyn Nets having posted a worse mark at 1-9. In that same stretch, Antetokounmpo averaged under five assists a game and had a mere three assists in a loss to Miami and just two assists in another loss to Philadelphia. In two games during that span, he actually had more turnovers than assists.

“In defense of him (Antetokounmpo), he’d probably have a few more assists if not for their (the Bucks) lack of shooters,’’ said a veteran NBA advance scout. “At the same time, he’s a high turnover guy. It’s tough to win when you have a high turnover guy like that.

“Personally, I wouldn’t play him all those big minutes at the point. I would play him just spot minutes there.’’

An NBA exec concurred: “I wouldn’t be playing him all those minutes at point guard, that’s for sure. And not just because of his turnovers, although that is disconcerting.

“I just think they’re asking him to do too much. I think he’s wearing down. He looks exhausted at times. I’d use him a lot more off the ball and take the load off him.’’

So, while there isn’t any doubt Antetokounmpo is a gifted player – his selection to the Eastern Conference All-Star team validates his talents — the question remains, just as it did when Antetokounmpo entered the league four years, ago: Which is the best position for him and, more importantly, for the Bucks? Point guard doesn’t seem to be it. Woelfel’s Press Box