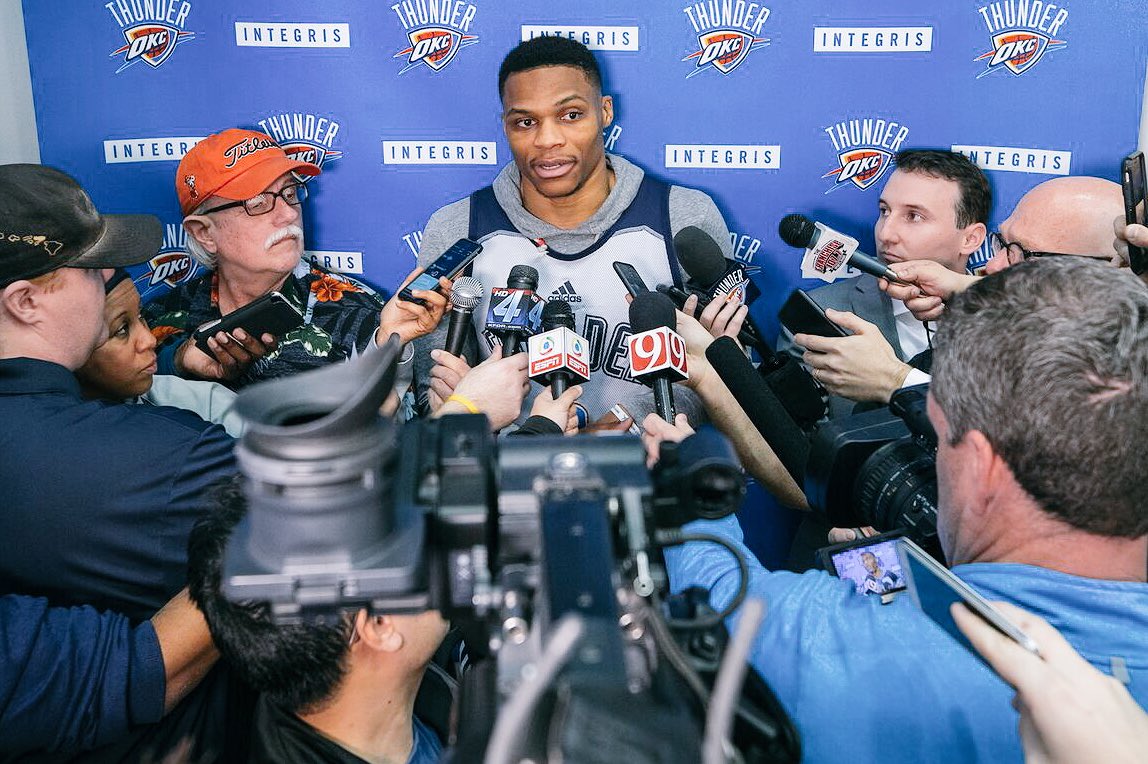 Welcome to my new weekly-ish NBA column, Winners Within The Game! Here I will be ranking, you guessed it, the winners within any given NBA game. The name isn’t the least bit deceiving. Now I’m sure you’re asking yourself, how are these winners going to be chosen, and why is this important in the first place? Well, there is no set-in-stone criteria, nor are there any limits as to who can be considered a winner. For example, tonight whoever was operating Oklahoma City’s in-arena music pre-game was my toughest cut from the Top Eight, solely because they were, for whatever reason, playing the ER theme song about ten minutes before tip-off. The ER theme is unquestionably the greatest television theme song ever, and I have no problem fighting you if you disagree.

Basically, anyone in or around a given basketball game can be considered a winner, and winners are chosen based on their overall performance AND their performance in comparison to expectations. I had virtually no expectations for OKC’s music operator heading into the evening. I was pleasantly surprised with the inclusion of the ER theme (and in all seriousness, if that theme hadn’t been attached to ER for over a decade, there is no reason why it couldn’t have done just fine as pre-game pump-up music). But outside of those 30 seconds of glory, I was left underwhelmed. So they are on the outside looking in.

I was hesitant to toss a spot to the Dubs bench, if only because the Thunder bench, or really any combination of Thunder players that does not include Russell Westbrook, is so inept that they can make any opposing group of five guys look really good. When Russ went to the bench near the end of the first quarter, the Warriors grabbed firm control of the game for the first time with Ian Clark, Klay Thompson, Shaun Livingston, Andre Iguodala and James Michael McAdoo on the floor together.

But this isn’t a new thing for the Warriors. Not only are there overwhelmingly potent near the top of their roster, the machine doesn’t stop running when two, three, or even all four of their All-Stars are on the bench. They’ve killed opposing bench units all season long in large part because of long-armed athletes, underrated shooting (especially when they let Klay join four bench players), sneaky continuity, active young bigs and a delightful barrage of Shaun Livingston turnaround mid-range J’s. I’ve said it before … in my advanced age (I’m one week away from being 25), this current version of Livingston has become my basketball spirit animal. My game is heavy on turnaround jumpers from the post.

Someday the Oklahoma City fans will follow Kerr’s advice to “Boo the player, but cheer the man,” when it comes to Durant, and while I am a supporter of coaches dropping borderline philosophical nuggets in the middle of between-quarter interviews, Kerr’s best contribution to Saturday night’s game was when the Thunder cut Golden State’s lead to 21 a few minutes into the third quarter, and Kerr quickly banged a timeout to make sure the bleeding stopped. Props to coaches who continue coaching like they are losing by double digits in games they are clearly going to win by double digits.

They relied way too heavily on the “Cupcake” chants for the majority of the game, but there were three things I absolutely loved about the Thunder fans:

I: There was one overweight homie who was wearing a luchador mask and had a cupcake painted on his torso. I didn’t mention that he was overweight to be mean … I’m overweight, so I have nothing but love for the man. The fact that he had a truly profound belly just added to the appeal of the look. Sports fans are the best.

II: In the fourth quarter Russ and Kevin Durant were about to engage in a jump ball, and the crowd started chanting “Russell! Russell! Russell!” right on cue. It was a beautiful moment.

III: After the Thunder fell to the Warriors, the OKC fans gave the Thunder a well-deserved standing ovation following the final buzzer. That’s great stuff. Realistically, the Thunder have no business playing a competitive game against the Warriors, and even though OKC never cut the lead to single-digits in the 2nd half, the game felt competitive for the majority. As I put it on Twitter, I can’t remember a more compelling ass-beating. The Thunder just kept coming no matter what the scoreboard said, and their fans showed them love for that. That alone made up for the overuse of, and shameful slandering of a delicious dessert.

The best pre-game video package I can remember watching this year. It presented all the contrasts between the two as individuals and players, the remarkable partnership that worked and nearly brought the Thunder franchise to the promised land multiple times despite overlapping skill-sets. It perfectly set the tone for Durant’s return to Oklahoma City, because more interesting than the break-up is everything that Durant and Westbrook did before it.

As I’ve written before, the fact that Westbrook and Durant didn’t win an NBA Title together is a major historical anomaly, and just as stunning that they only made one NBA Finals together. They made the Conference Finals in 2011, a year or two ahead of schedule, and then returned there every single year Durant and Westbrook entered and exited the postseason healthy. Remember, a freak knee injury to Westbrook probably cost us a Thunder/Heat rematch in the Finals in 2013, and in 2014 the Thunder were games away from the NBA Finals yet again. Durant missed the majority of the 2014-15 season, but you have to imagine, based on what we saw during the 2016 Playoffs, a healthy and experienced Thunder team would have been Golden State’s biggest challenger in the Western Conference in the 2015 Playoffs.

The chances that a team will draft three of the six best players in the NBA in back-to-back-to-back NBA Drafts (Durant, Westbrook, and James Harden) again is microscopic. The chances of that team not winning an NBA Finals is zero. It’s fucking zero.

Before the season I ranked the Top 50 NBA Players of the 21st Century, and I spent the duration of my Russell Westbrook section making comparisons between Russ and fictional character Tony Montana, better known by the nickname Scarface. It was a bit of a stretch at the time, and it could certainly be argued that it still is, as Russell Westbrook is a basketball player and Tony Montana was a coke-head drug lord. But Saturday night, the parallel’s were never more real. Saturday night was the final scene of Scarface to a tee.

Both Russ and Tony were at home (Chesapeake Energy Arena; a Miami mansion with a fountain and a statue that said “The World Is Yours”)

Both Russ and Tony were severely and fatally undermanned (Russ has a bunch of teammates who can’t shoot or even create their own shots or shots for others … Tony had a few dudes guarding the house, and his sister Gina who was in a cocaine-induced manic state)

Both Russ and Tony probably understood that they were undermanned, but they didn’t at all cower from it (Russ stayed in attack mode all game … Tony snorted dangerous amounts of cocaine and armed himself with big guns)

Both Russ and Tony decided they would go to war all by themselves despite a major numbers advantage, and they each had varying degrees of success (Russ scored 20 points in the third quarter and single-handedly made the game interesting even though common sense said the Thunder had no chance to win … Tony shot and killed a number of men who were trying to do the same exact thing to him)

Both Russ and Tony opted against shying away from talking shit to the opposition even though they were facing insurmountable odds (Russ yelling “I’m Comin!” repeatedly to Kevin Durant legit gave me chills during the game … Tony put on an unrivaled shit-talking clinic during his gunfight with Sosa’s army)

Both Russ and Tony were defiant until the very end, when one final death blow put them to rest (Durant hit a dagger three right in Westbrook’s face to put the game away for good … Tony got shot in the back by a shotgun and fell face first into a fountain)