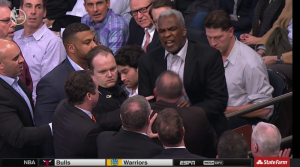 Later on The Dan Le Batard Show on ESPN, Oakley was asked whether he would go back to Madison Square Garden as Dolan’s guest.

“I have never asked for nothing,” Oakley added. “I love the fans in New York. They’ve been supportive. One of the things I told the commissioner, I want to have a press conference and I want him to apologize to me and the fans. They’ve had my back and they’ve felt the pain. I really appreciate the people all around who’ve had my back.”

Sources with both MSG and Oakley confirmed that the ban was lifted. ESPN