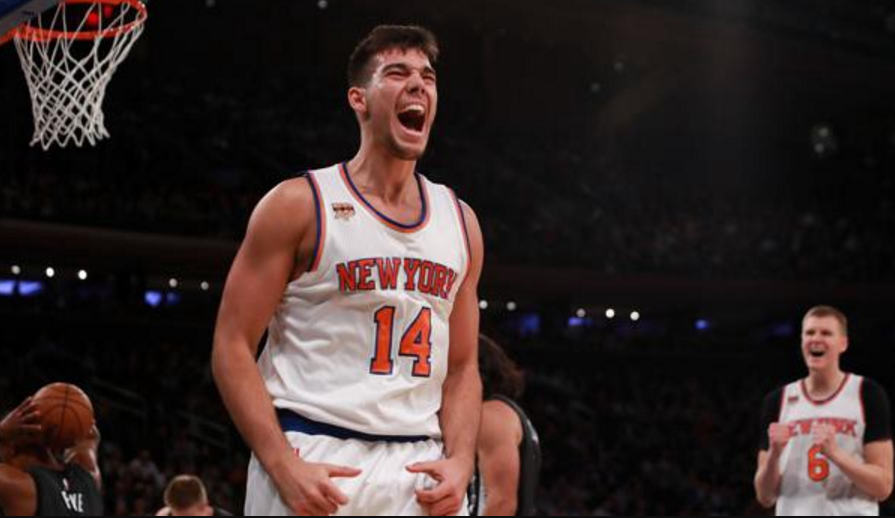 There has not been much to look forward to this season at Madison Square Garden. Phil Jackson’s vendetta against Carmelo Anthony has taken center stage. James Dolan’s petty antics have only highlighted how bad the franchise environment is. But lost in all the negative sauce has been piece of positivity. The play of rookie big man Willy Hernangomez.

While the veterans have been underachieving, playing matador defense or getting run off the floor by a Lakers team led by Tarik Black, Hernangomez has quietly cemented himself as a legitimate NBA player. He may be in his first season in the league, but Hernangomez has proved to be polished beyond his years like his good friend Kristaps Porzingis.

A couple months back I talked about the Knicks’ big man problem. They were starting a decrepit Joakim Noah while back-up Kyle O’Quinn and Hernangomez continued to shine off the bench. Since that time both back-ups have remained effective, but so has Noah. Per Knicks stats guru, Tommy Beer of Basketball Insiders, Noah is averaging a career-high in rebounds (14.3 per 36 minutes) and rebound percentage (21.3%). It still doesn’t make his $72 million contract a wise move, but to his credit Noah has improved from a liability to a specialist.

Noah is not going to be the defensive anchor that plays 30 to 40 minutes a night like many hoped he’d be in New York. He has proven he can give Hornacek 15 to 20 energy-packed minutes. O’Quinn is in a similar boat, he may look the part of a starting center in spurts, but then you see him jump and remind yourself why he is destined to be a talented backup who can provide energy and offense off the bench.

That leaves us with Hernangomez who possess all the upside in the world with not much downside considering the Knicks current position. At 22 years old Hernangomez is the second youngest on the team and is shaping up to be one of the best contracts in the league. The Knicks have him under team control until 2020 with an annual cap hit of $1.4 million. Like Porzingis before him Hernangomez proves to play beyond his years. His offensive game is already better than Noah and O’Quinn. On defense he is not afraid to bang bodies, something he showed early in the season when tasked with slowing Dwight Howard.

He had no problem handling Dwight’s chippiness and was not afraid to look for his shot. The Knicks are already ranked 24th in defensive rating and dead last in defensive rebounding per NBA.com. Hernangomez’s weakest spot is rotating on defense, but how much worse can he really make this Swiss Cheese defense as Clyde Frazier would say. Noah is still the Tasmanian Devil on the boards, but he and Hernangomez pull down a similar percentage of defensive boards, both hovering around 25-percent.

Noah separates himself as the superior rebounder is on the offensive glass where he pulls down 16.1-percent of offensive boards while Hernangomez pulls down 13.3-percent. On offense Hernangomez makes life easier for the playmakers. Hornacek likes to open up his half court with a pick-and-roll with the center. When Noah is in the defense focuses on the ball handler because Noah is not a threat to score outside five feet. Hernangomez on the other hand rolls to the rim, finishes with either hand and is a good passer.

Against the Pacers he showed off his full repertoire. In the half court offense he’s far and away the best the Knicks can put at center. That added attention helps ease the extra defenders sent Carmelo Anthony’s way or Kristaps Porzingis’ way. Hernangomez and Porzingis were teammates in Europe and the chemistry the two young bigs have is noticeable.

“I think KP and me, we have special connection,” Hernangomez told Newsday. “When he looks to me, I know what he wants. The same [for me]. I think it’s nice. We play more time together, we played a couple years ago together and the things are going good, so I think we have to keep working the same way and be ready.”

Whenever Hernangomez has been on the floor with Porzingis good things have happened. Together they led a fourth quarter comeback against the Nets. Porzingis finished that game with 19 points, 12 rebounds and 2 blocks in addition to hitting his first career game-winner. Hernangomez added 16 points, 16 rebounds (seven offensive), 2 assists and 2 steals. The play of the night featured Hernangomez flashing his passing prowess and ESP with Porzingis.

A rule of thumb the Knicks should implement moving forward is doing everything they can to make Porzingis’ life easier. It’s no surprise that the Knicks are winning when their 21-year-old phenom is at ease. Hornacek did just that this past Sunday against the Spurs, giving Hernangomez his second career start.

His addition to the starting five paid dividends as the Knicks were able to finally win a home game. (We’ll ignore the fact the Spurs have every possible open three to tie or take the lead.) Hernangomez posted just 12 points, 9 rebounds in 29 minutes, but added 3 steals as well as this. His positive impact has been constant as the team has a net rating of +1.2 when he’s on the court and -5.1 when he is on the bench.

Most importantly, he brought out the best of Porzingis.  The Knicks outscored the Spurs by 20 when KP was on the floor. Sunday had a couple moments of encouragement–the defense was actually existent thanks in large part to Lance Thomas returning from injury –but Porzingis’ influence looked like light at the end of the tunnel. Carmelo is going to give you 20-plus a night not matter what, Porzingis is the pendulum. With Hernangomez on the floor that pendulum swings in the Knicks’ favor.

“It’s always fun to play with KP and today we got a chance to play together from the beginning,” Hernangomez told the New York Post.  “KP and me know each other and trust each other. He got my back. I had his back.’’

No matter how many minutes Porzingis logs with Noah or O’Quinn, the chemistry will never be as strong as it is with Hernangomez. Their ESP goes beyond no-look dimes. Simply knowing where someone is going to be on the court at all times helps on rotations and overall ease. On Sunday Porzingis played loose for the first time in weeks and the result was a huge win.

Hornacek has said that he plans to start Noah when he’s healthy. Every game Noah misses Hernangomez makes that sound less and less realistic. Stevie Wonder can see where this season is headed. The only way to salvage the season is to maximize one of the top young players in the league.