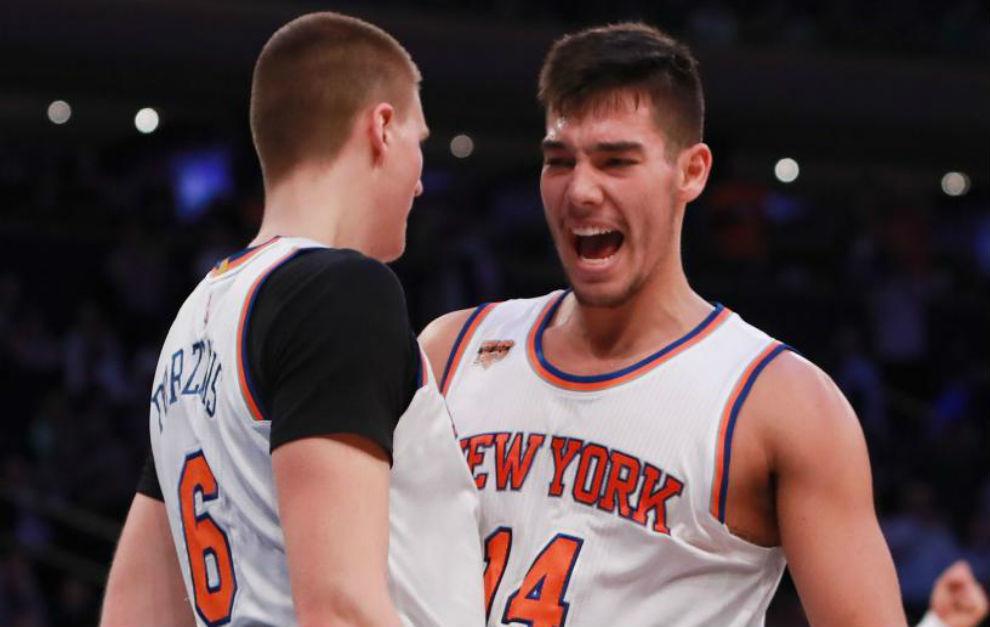 It’s impossible to talk about the New York Knicks without the words “Kristaps Porzingis” and “unicorn” making their way into the conversation. Porzingis is considered to be the franchise’s saving grace and only viable asset. His presence may be a silver lining in an otherwise rotten franchise, but he is no longer the only asset on the team. Willy Hernangomez has evolved into a key building block in his own right.

Had the Knicks been wise enough to play Hernangomez earlier the team might have their first Rookie of the Year winner since 1988 when Mark Jackson took home the award. Hot take? Not really. This year’s rookie class was pure ass gas with Joel Embiid (drafted in 2014), Dario Saric (also drafted in 2014), and Malcolm Brogdon leading the pack most of the season.

When given the proper playing time Hernangomez has been just as viable a candidate especially with Embiid out of the race. Per 100 possessions the Spanish big man is averaging 21.7 points, 19 rebounds, 1.6 blocks and 1.5 steals while shooting 54.5-percent from the floor. A couple weeks ago I wrote about the Knicks developing Willy to salvage the season. The team has done that and now they have themselves another building block for the future.

Against the San Antonio Spurs Hernangomez was brilliant in the third quarter. He feasted on pick-and-rolls and cleaned the glass en route to a 24-point and 13-rebound performance. Porzingis has not yet developed into the stretch-five his body was destined to be, but maybe he doesn’t have to.

Joakim Noah will be suspended the first 20 games of next season leaving an open spot at center. (The Knicks are reportedly rushing Noah back this season to get a head start on the suspension, but he will miss at least the first 12 games of next season.) Jeff Hornacek has not tipped his hand as to who will take Noah’s place, but Hernangomez is the only logical answer.

Since Porzingis has played more minutes at center his three-point percentage has plummeted from 40-percent to 30-percent. The Knicks would much rather take the KP who stretches the floor by hitting threes than the one we have seen a little too often in the second half of the season.

Hernangomez is not exactly a defensive anchor himself, but he is much more physical than Porzingis down low. He has been able to adjust to the NBA game just as quickly as Porzingis was last year.

“(Hernangomez) was able to adapt very quickly,” Porzingis told the Daily News. “I thought the same way people thought it was going to take me a long time to adapt, the same way they thought about him.

But he was able to transition real easy in the locker room and the floor. I’m happy that he’s out there on the floor with me playing 30-plus minutes.”

“I have to be way more focused on defense. I tried to improve. I think from the beginning of the season, I improved my defense. But it’s not enough,” Hernangomez said.

Porzingis is not innocent either. In recent games he has developed some lazy defending and that cannot happen next year when winning matters again. With the rest of the roster in relative purgatory the Knicks have to make every decision with KP and Willy in mind.

As of this writing the Knicks currently sit at sixth place in the lottery. Depending how the final eight games play out the team can climb as high as four prior to the actual lottery. That sets them up to scoop up an elite guard.

In a perfect world the Knicks win the lottery and Markelle Fultz becomes the savior with the twin towers flanking him. But even a realistic scenario can land them Lonzo Ball, De’Aaron Fox, Dennis Smith Jr. or even Josh Jackson, the top wing player available in the draft.

Whichever direction the Knicks choose to go they must ask themselves the right question. Back in February the word out of MSG was that the remainder of the season will be used to see who fits the triangle. That is the wrong question.

The team can run the triangle if they like but they should be seeing which players fit alongside the franchise’s pillars of hope not a system that has led to the team to a 77-161 record the last three seasons.

**All stats taken from  Basketball-Reference**